by Neptune24
Hi guys. Long time I know, but new build needed sorting and no internet. Anyway back to the point. I have a really rubbish internet speed and would like to know if there is any way to speed it up for the time being as I refuse to pay to end the contract early. And knowing that it might help I am with Sky. 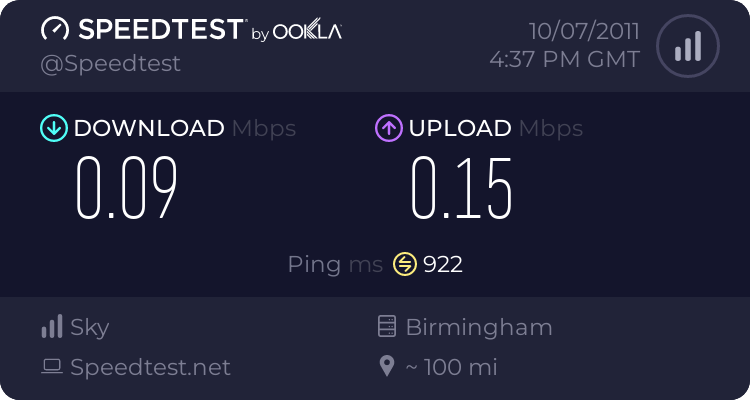 And just to confirm that I am the only one using it when the test was done and that was the only thing using the broadband.

by Major_A
Not really. There are some adapter tweaks you can do but they aren't even worth doing. Your internet speed is what it is (that make sense?). If you feel like you aren't getting what you paid for then you need to contact the provider. You could be behind a bad node, faulty modem or old wiring. All of these things would cause problems.

by DJ Tucker
sky broadband has been having these problems since the truly unlimited came in. i would check to see what your download and upload should be then call them to find out why you only getting this. from there they should send out a repairman to access what is causing the bad speed and sort it for you at no cost, unless the problem is the area cable system

by DaddyRabbit
I don't know that I would call that "broadband"

Using the same app I measured the DL/UL speeds on my supposed 6mbs cable connection from Maryland, USA to Suva, Fiji (7801.33 miles) and got:

This is definitely an issue with the ISP and they should fix it. Is there an "expected" speed? For example my service states ~ 6mps down and 420kbs up (regularly get more though so no complaints), with a clause that performance may vary due to load etc. If you are consistently getting dial-up speeds thru a cable or DSL there is an ISP problem.

I don't think I will complain about my ISP again...

by Neptune24
Ok thanks guys. Just out of interest is there any way to test from pc to wall myself??

by Major_A
You can run a traceroute and see if the issue is between the computer and your router/modem.
http://www.pingplotter.com/freeware.html

Major_A wrote:You can run a traceroute and see if the issue is between the computer and your router/modem.
http://www.pingplotter.com/freeware.html


Careful using traces to determine speed. some devices on the isp network will show high latency as they are busy serving real traffic and will only reply to ping as a low priority. "pingplotter" will just sit an wait for a reply & you'll think this is where the slow speed it.

Make sure your not using wifi when testing the speed

by Neptune24
Ok thanks for the app. And I am using the adapter that allows me to run the signal through the mains, which is not where the issue stems from as i took the pc down to the router and didnt get much faster. I will say that the results I published were wrong. The real speed is 0.45 not 0.09. Windows was updating which i didn't notice.

by Major_A
That's still not very good. What were the published speeds when you signed up?
All times are UTC-06:00
Page 1 of 1
Powered by phpBB® Forum Software © phpBB Limited
https://www.phpbb.com/