One of my "hey can you fix this" moments

This is the place to discuss the latest computer hardware issues and technology. Please keep the discussion ON TOPIC!
Post Reply
6 posts • Page 1 of 1

One of my "hey can you fix this" moments

Co-worker buddy brought his PC to me, like most of my co-workers do when their PC acts up.

His chief complaint was it was really slow graphics playing movies and then the monitor quit. He knows the monitor is good as it was only couple years old and he tested it on his daughters PC. Ok, I'll take a look the on board vid may have died, if that's the case might be able to put a video card in and leg the system out some more. he also wanted to know if I could put a bigger hard drive and install windows 7 on it. 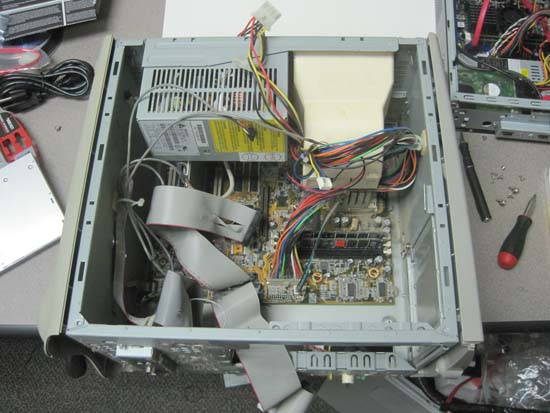 Its an old HP of some kind, and I have seen boat anchors that are lighter. Rocking optical drives with headphone jacks and volume controls. So I pulled the HD/OD Drive cage from the front and seen the inside was packed with dust bunnies, whole whopping 256mb of RAM (in total across 4 sticks). Checked the hard drive and apparently I have worked on his PC before because it had one of my old hard drives in it (used to draw on my drives back in the day) so hard drive wasn't going to point to age. 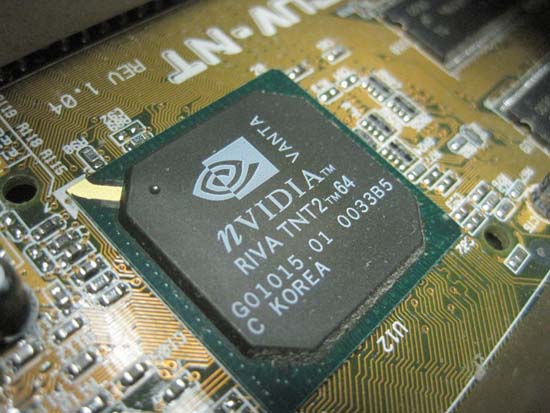 Contiuned to pull parts to clean out the bunnies and found my first clue to age, AGP slot. Not far from it the nVidia TNT2 on board chip

so we are in the decade+ range for age. Well maybe its a little newer, whats the CPU...

Winner Intel P3 900mhz, so 12ish years old. Dig the discoloration on the CPU die. There was next to no TIM left between the chip and passive heatsink.

The whole time I'm tearing it apart I cant help but shake my head and giggle to myself. He is standing next to me the whole time and then he say's "let me guess you are saying its not worth fixing" "I spent over $3,000 sure it can't be fixed"

gonna try and talk him into building a VERY simple little box, he didn't like it when i told him his phone had more horse power than his PC did.

Thought I would share my little trip down memory lane, and one of my "hey can you fix this" moments.

I can't believe that it lasted this long. He must have patience of a god. Does he still use a dial-up modem?

What's that ribbon cable sticking out of the case for? How much hard drive space does it have? Or does it still use floppy discs?

I don't think it is worth your time to get this thing faster. What's the point! I would recycle it and give him twenty bucks to get out of my office.

Yeah, its all made its way to the recycle pile in the store room.
"The democracy will cease to exist when you take away from those who are willing to work and give to those who would not."
-Thomas Jefferson
Top

Haha sounds like some of the stuff I see from time to time. I have some 10 year old machines still running strong

perfect for lookup stations in our school library. Even if he spends a couple hundred bucks on a prebuilt form tigerdirect he would be doing really good for himself.
Top
Post Reply
6 posts • Page 1 of 1