by Skippman
So I finally have all my parts and I'm ready to begin construction! I created this thread to be my build log. 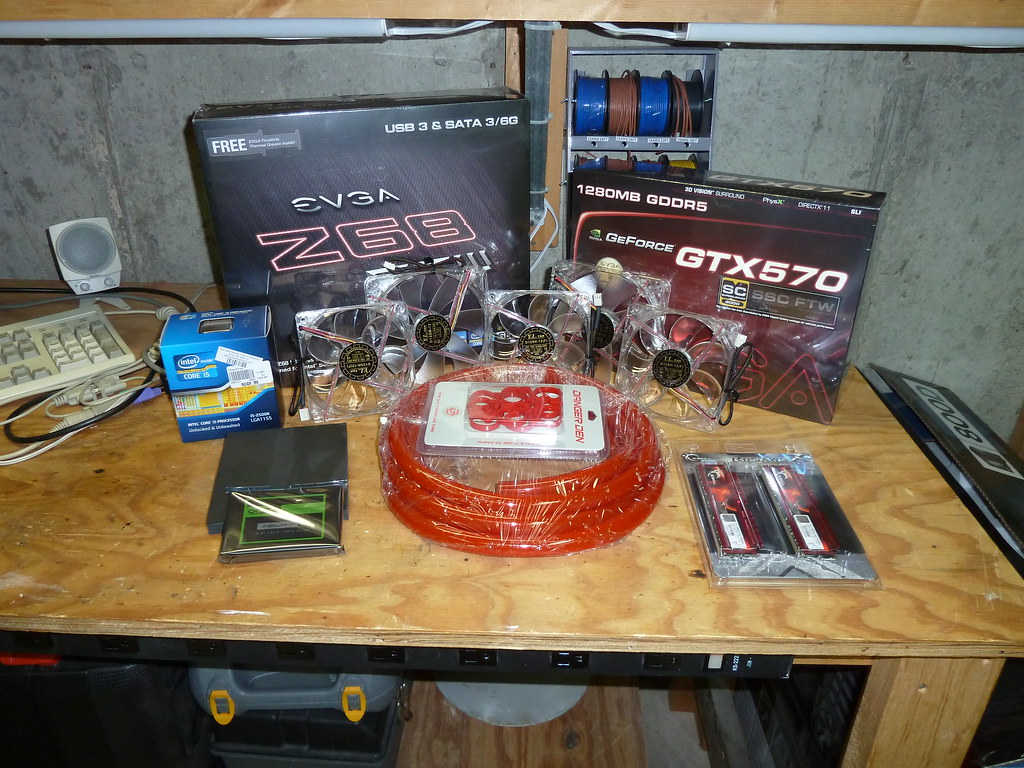 I started by disassembling Warmachine 2.0 from it's Antec 1200 case. 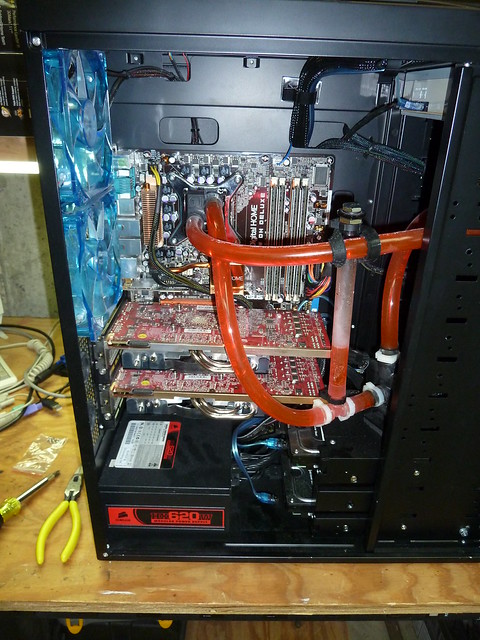 I ended up being able to remove the entire water cooling loop as one piece thanks to the large case opening in the front. 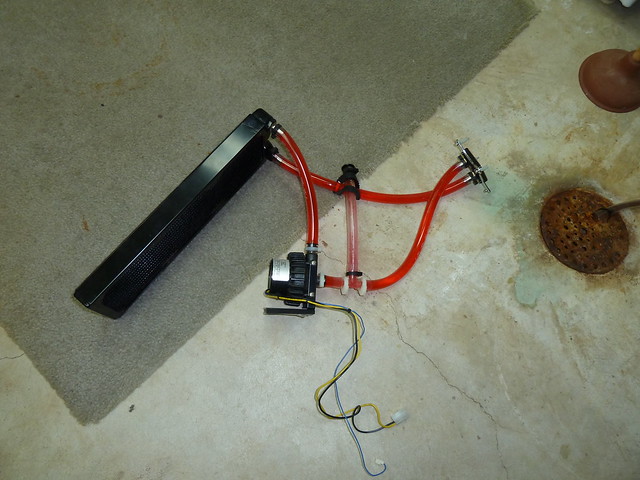 My workshop is now completely strewn with the parts from the old machine! 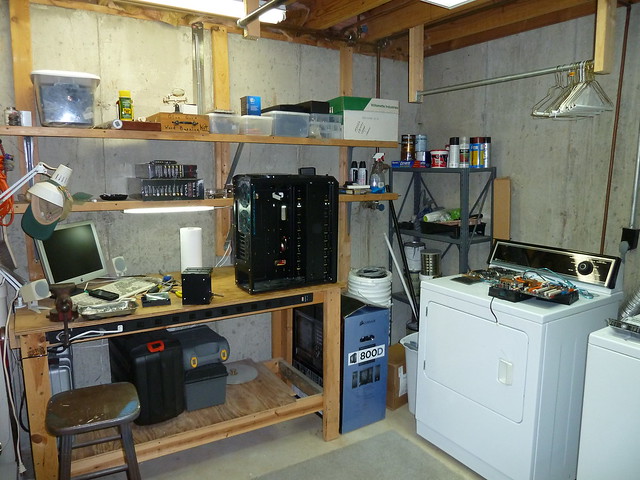 Using advice from bubba I cleaned out all the parts for the new loop - radiator, pump, and waterblock - with a mixture of 1:1 distilled white vinegar and distilled water. I made sure to rinse using only distilled water and did so thoroughly. The parts are now drying in my kitchen, awaiting installation tomorrow. 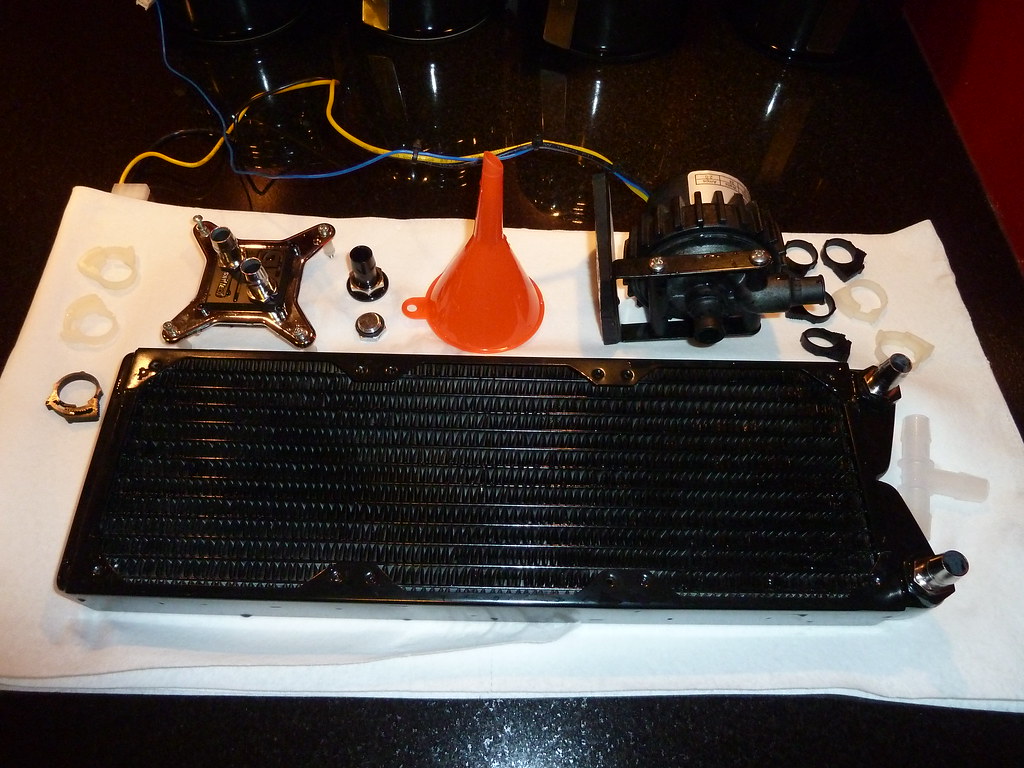 by Skippman
Well, it didn't take long for me to hit a wall. The new motherboard came with no retention mechansim at all for a CPU cooler as I'm assuming that's the new style. So now I have to find someone who can get me a Swiftech 775 socket mouting bracket. OR spend $80 on a different water block.

by sbohdan
Nice. Keep us posted

by Skippman
Well after a moment of panic about the mounting bracket and numerous calls to local computer stores and Micro Center I thought for sure I was out of luck. I even tried Lowes and Home Depot to see if I could find nuts small enough to use with spacers to mount the waterblock. I figured I had nothing to loose and I might be able to cobble something together so off I headed to Micro Center.

Low and behold the guy in their DIY section just looked at it and goes "Why don't you get a backplate for it?" To which I reply "I don't want to wait a week for it to come in." With a sigh he looks at me and replys "I meant off the shelf over there... here look..." He walks me over and shows me these brackets from XigmaTek. What do you know, perfect fit! 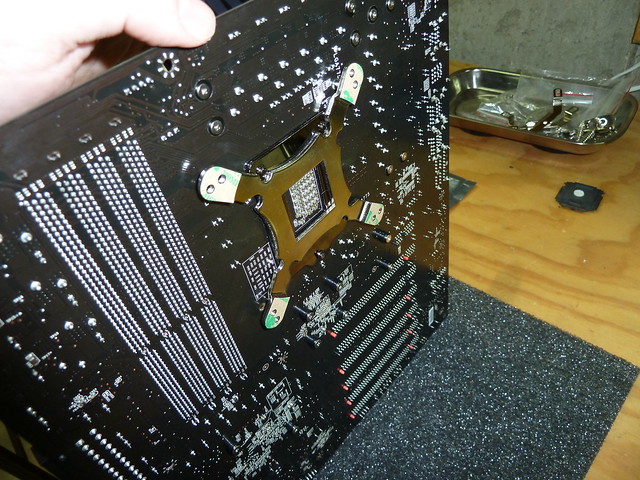 I know it looks crooked on the board but that's how the holes are for the socket 775 mouting option. 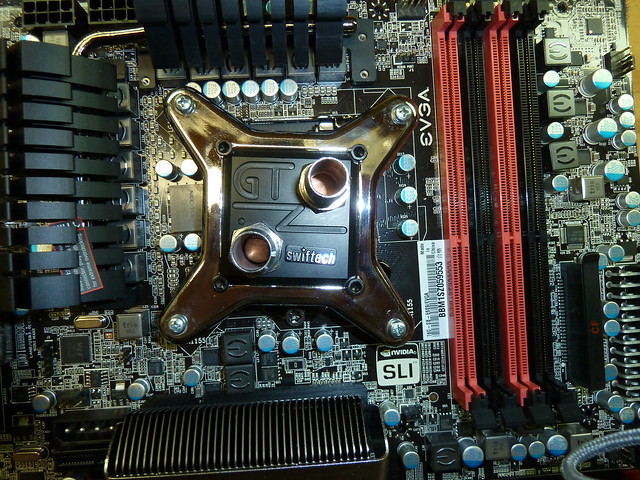 I also took the time to swap out the two visable case fans for the 140mm Yate Loons. I made sure to reuse the rubber silencers that came on the original Corsair fans. These are now hooked up to my NZXT Sentry as fans 1 & 5. 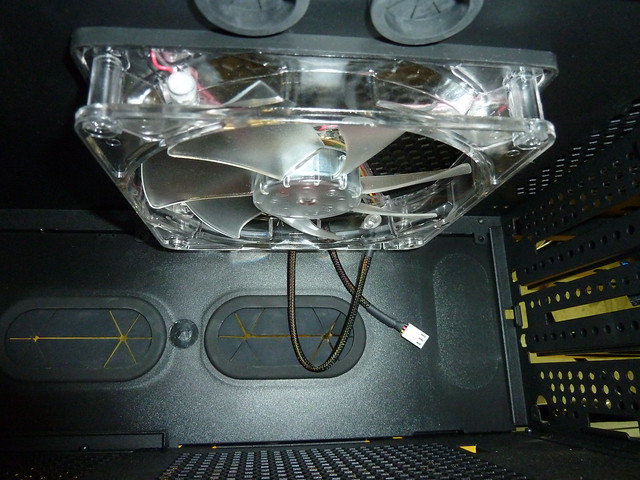 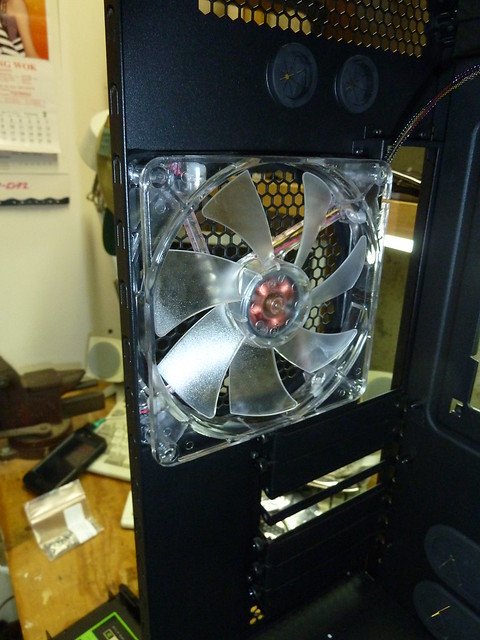 I next mounted the three 120mm Yate Loons to the Swiftech triple rad using special allan head screws I ordered for this build. 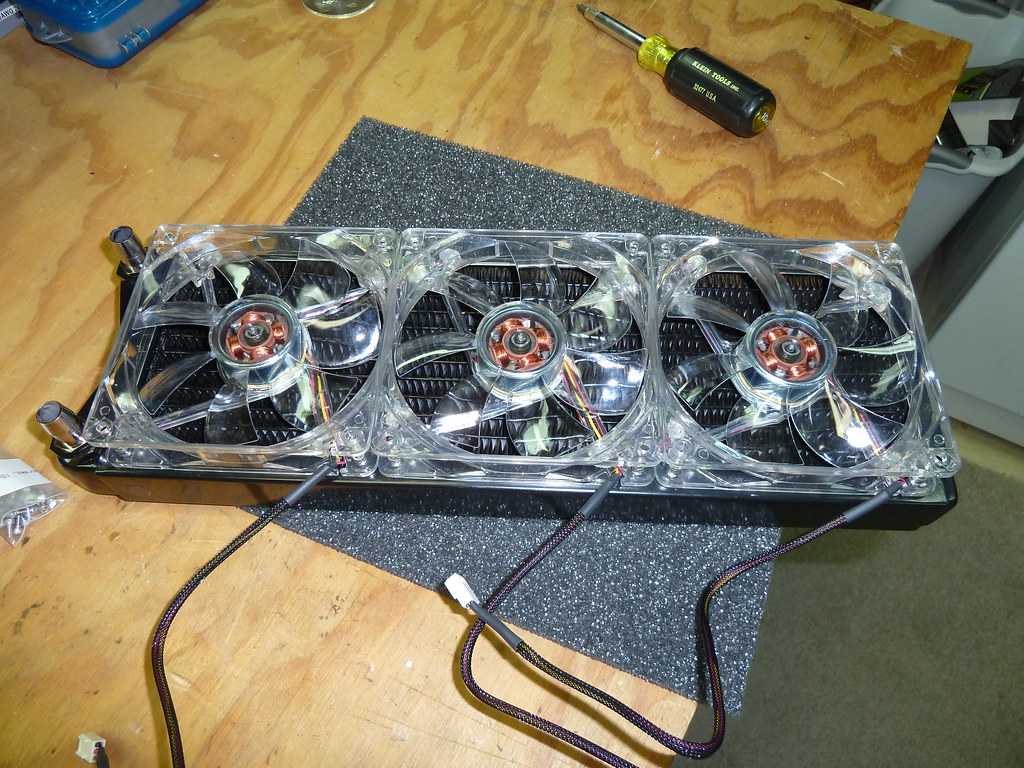 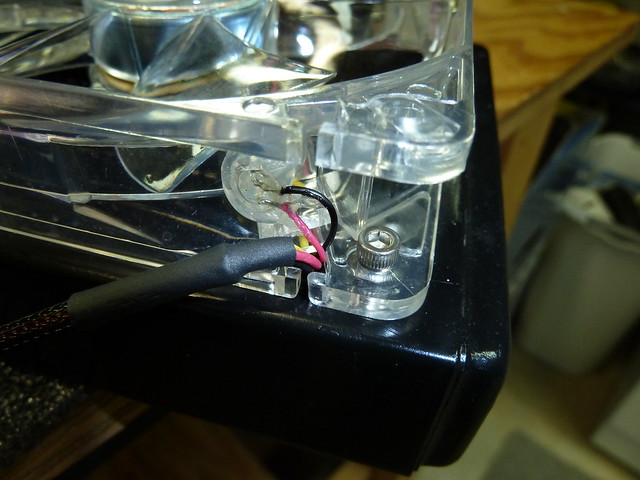 In order to minimize the chance for leak damage to components I installed the radiator so the barbs are away from the motherboard and towards the front of the case. 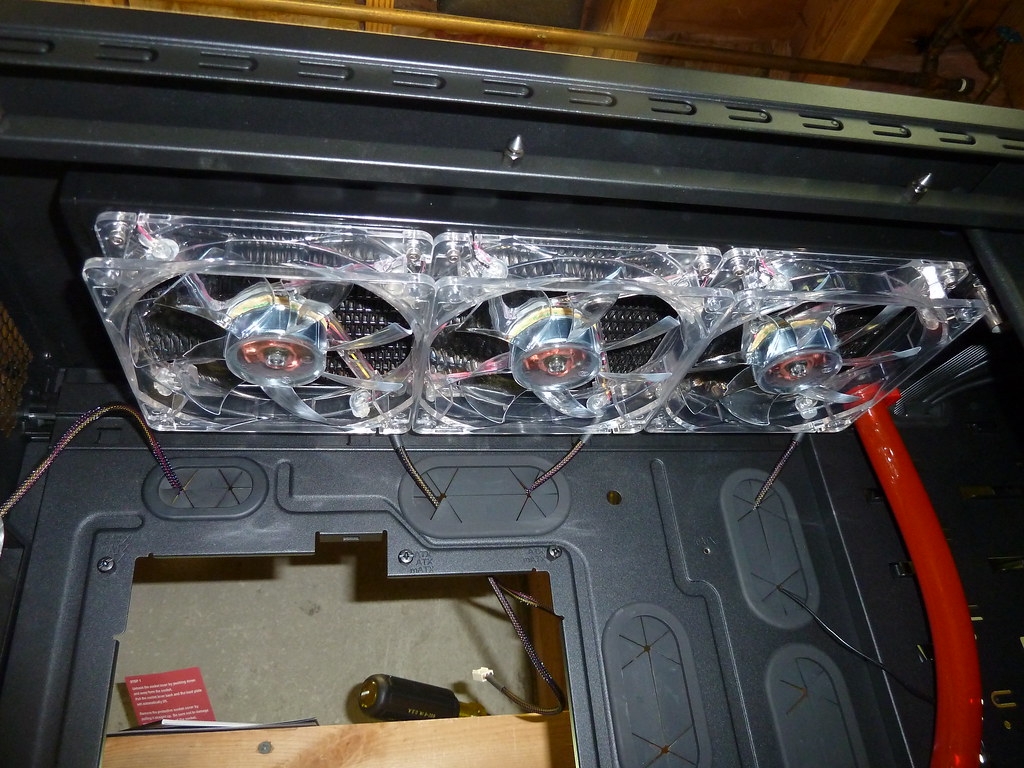 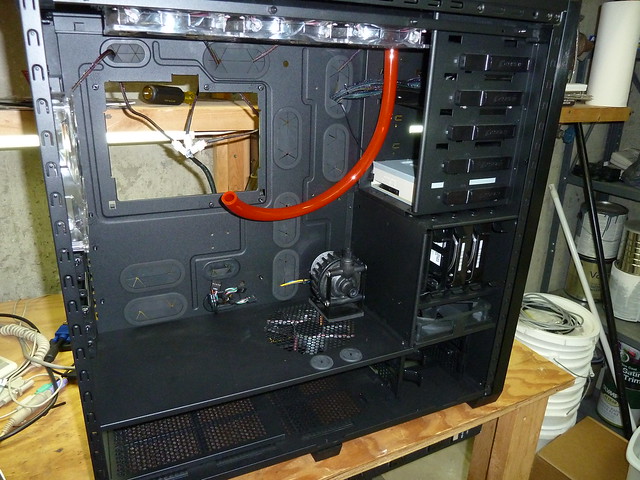 by Skippman
Well, I spent the morning mounting the motherboard, wiring up the drives and the power, and running the cooling loop.

Here's a pic of testing the fan controller. I wanted to get an idea of how much light those LED's would output. 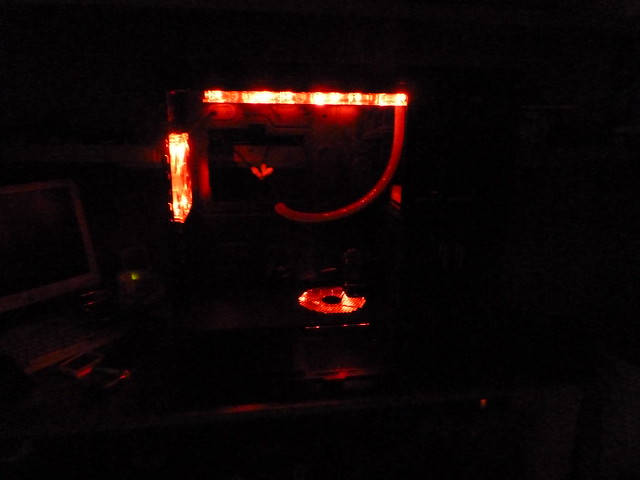 I also used the allen head screws for the motherboard and drives as you can see here. 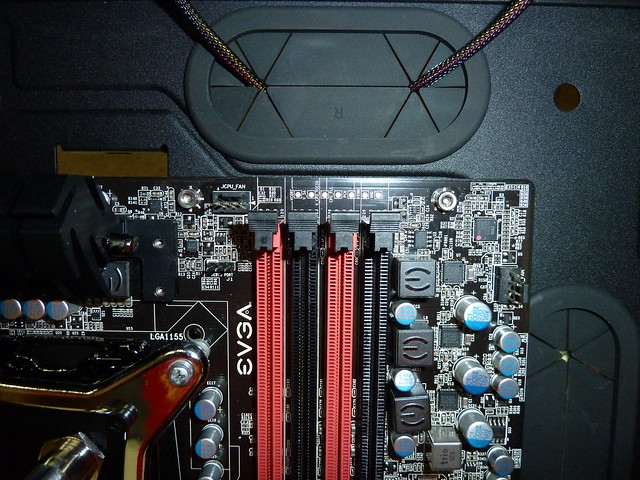 I made my t-line using some left over clear tygon from my last build that I was using to mock up the water lines for this build. I decided to use the clear tygon so I could keep an eye on coolent levels as well as see how much air was in the line. 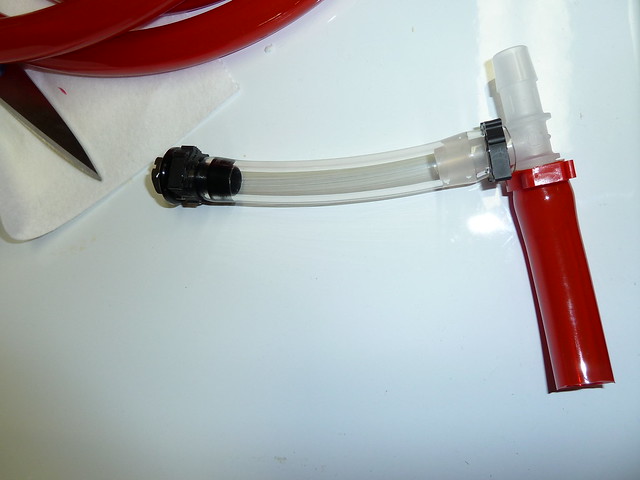 Here's the completed loop undergoing leak testing. The pump is going to get moved about another inch forward to releave some of the tension on the loop. As you can see I'm powering the loop with an external power supply. The motherboards power is not completely hooked up yet and I wanted to avoid running the whole machine durring this phase in case of leaking. It's been running for a few hours now with no leaks. 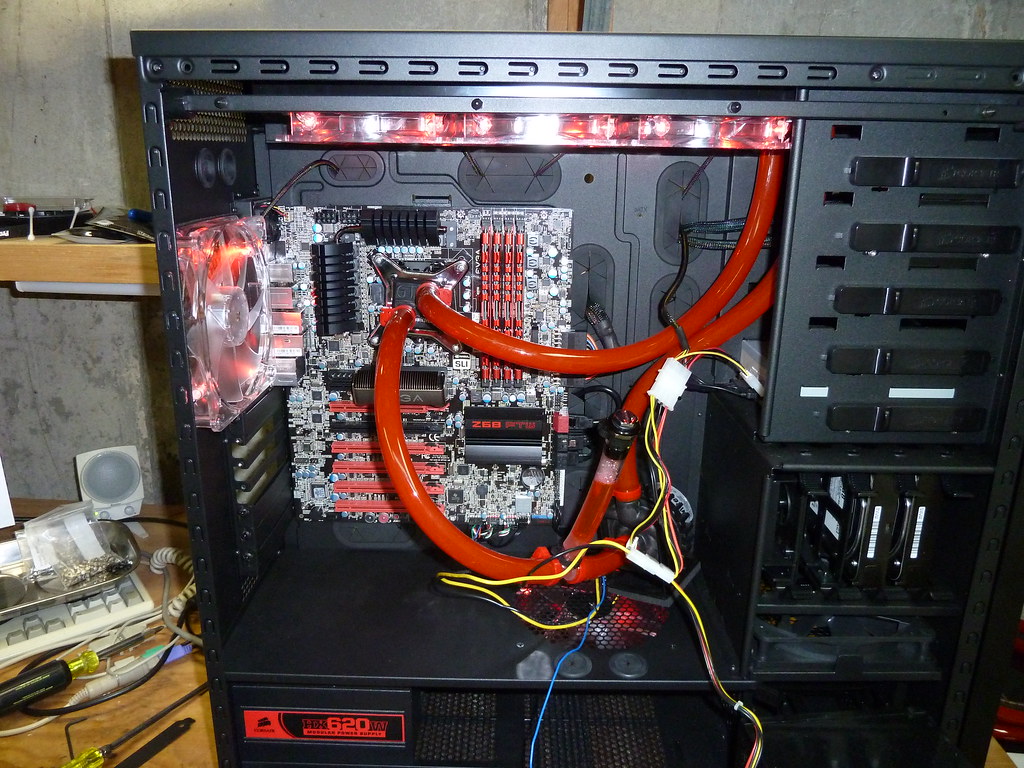 by Skippman
Now I've hit a new brick wall. The machine posts, boots, and takes me into the Windows 7 installation. It tells me it's formatted my SSD and that it's copied over all the files. But when it goes to expand them it sits at zero until eventually it gives a read error. Once that's done the SSD does not show up as an installable volume again until I reboot the machine.

by vbironchef
update your firmware on your SSD. I went to NE and the latest is FW 2.14 Read the reviews of your SSD and you should be able to sort it out. Good Luck! Your build looks great so far!

Skippman wrote:Now I've hit a new brick wall. The machine posts, boots, and takes me into the Windows 7 installation. It tells me it's formatted my SSD and that it's copied over all the files. But when it goes to expand them it sits at zero until eventually it gives a read error. Once that's done the SSD does not show up as an installable volume again until I reboot the machine.

This happened to me 2 weeks ago, when I was installing windows. It turned out my windows CD was too scratched. I had to get a new one and that solved it

by Skippman
Well, I unraided my HDD's and that seemed to get Windows to install. I re-enabled the RAID and it will boot to Windows but man I'm getting a ton of BSOD's. The chips running at 32deg so I know it's not overheating. I'm suspecting it's a RAM issue. I've heard that eVGA's don't like to be controlled by SPD and usually require you to manually set the timings and voltages.

by Skippman
So I played around with it a bit more last night. I made sure to check the firmware of the OCZ drive and it comes back as ver 2.15. So I think the firmware for the SSD is up to date.

Thinking it might be an undervoltage issue with the RAM I tried upping the RAM voltage aboue 20mV. This seemed to stabilize things for a while.

I reinstalled Windows and had a stable desktop for a little while. I installed the eVGA motherboard drivers and everything seemed to be working OK. I went back into the BIOS and re-enabled RAID and rebooted. Windows booted fine and stayed up for about 30 seconds before another BSOD. I rebooted and the machine immediately went to BSOD once in Windows. I tried going back into the BIOS and disabling the RAID but I continue to crash immediately on desktop.

I can stay in the BIOS indefinately and the proc never shows hotter than 40C so I don't think it's a proc issue or an overheating issue. I'm still thinking it's a RAM thing but the timing between enabling the RAID and the increase in speed of the BSOD makes me wonder if I don't have something else going on.

by Skippman
Well, I ran Memtest86 last night for 10 passes. I had no idea it'd take that long to test 16gb of RAM. I didn't have a single failure so I think I can rule out the memory as the cause of the problem.

That leaves the SATA cable and the SSD as possible causes of trouble. I'm going to try replacing the SATA cable tonight and see if that fixes the issue. If it doesn't, I'll remove the SSD and try installing Windows on my RAID0 array. This is REALLY frustrating.

by smack323
well I can say you cable management is fantastic – I just built a new rig last weekend with many of the same parts as you and it’s a damn rats nest.. the 6 fans I have don’t have the nice mesh so it looks horrible. I am having problems getting the sound card working at all.

by Skippman
My X-Fi didn't even show up in Vista until AFTER I installed the driers which was REALLY REALLY weird to me. What's your soundcard doing, or not doing I should say?

by vbironchef
Check to see if your SSD and your other hard drives are getting enough power.

vbironchef wrote:Check to see if your SSD and your other hard drives are getting enough power.

I'm not sure how I'd go about doing that. Would I need a PSU tester? I have the two HDD's and the SSD coming off the same cable to the PSU, a three port SATA power connector. Do I maybe need to move the SSD to it's own "rail"?

by vbironchef
I would for all the hard drives.

by Skippman
So run a seperate lead from the PSU to each HD?

by vbironchef
Yes, This is why I always buy the Corsair HX750 power supply. It has more rails. I would rather rule out power issues than have less cables. I think you will be good to go after you have separate rails for your hard drives.

by smack323
I dont want to hi-jack your thread but basically when I try to install the drivers they say compatible device not found aborting install. or something like that. good to know about the hard drive power - if I run into any issues. I have a SSD, 1TB drive and dvd drive on the same SATA power. so far no problems.. knock on wood..

by sbohdan
How about your RAID drivers or the MOBOS's firmware? The problem seems to occure when you enable RAID.