Happy Chinese New Year 2010 - The Year of The Tiger

A place to rant about politics, life, or just anything you damn well feel like telling others.
Post Reply
6 posts • Page 1 of 1

Happy Chinese New Year 2010 - The Year of The Tiger

The first day of the Chinese New year 2010 is Sunday, Feb 14, 2010 - the year of the Tiger, according to the Chinese Zodiac. It is said that the Chinese Zodiac which designates the lunar new year cycle was introduced by Emperor Huang Ti in 2600 BC. Thus the year 2010 on the western calendar is the Chinese lunar year 4708. By tradition, there is a Spring festival that lasts 7 to 15 days to start the new year. Twelve animal names are used in the Chinese Lunar calendar to represent a 12 year cycle. This year's animal, the Tiger, is the third in the cycle, following the Rat and the Ox. 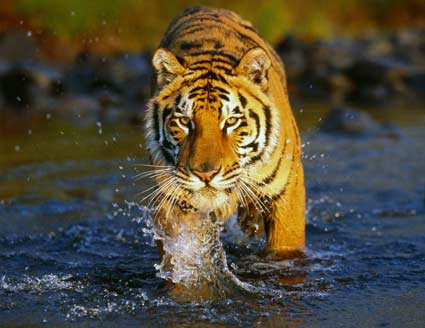 Tigers are physically powerful, gracious, independent and brave, they are extremely bold animals. They are friendly and loving but can also selfish and short tempered. Tigers seek attention and power; frequently they are envious in a relation. Tigers live dangerously which often leads to trouble. They are intolerant, take risks and are always searching for excitement. Tigers are also instilled with a good dose of courage. The Tiger has an overpowering attraction and is very kind and always takes on the character as protector. The Tiger flourishes by power and attention and takes advantage of all circumstances it gets itself into. The Tiger is a natural leader and loves to be the center of attention. As a rebel it goes up against authority and speaks out about wrongs in society, and willingly puts up objections. Even if you don’t agree with the beliefs of the tiger you admire his way to protest.

Happy Year of the Tiger! Happy Chinese New years to everyone too.

And to geokilla, its called Pin yin and refers to mandarin to english. What you put was cantonese and that doesn't have an official pin yin anyways. Pretty sure anyone who speaks canto would understand that perfectly fine.
Top

And to geokilla, its called Pin yin and refers to mandarin to english. What you put was cantonese and that doesn't have an official pin yin anyways. Pretty sure anyone who speaks canto would understand that perfectly fine.