A place to rant about politics, life, or just anything you damn well feel like telling others.
Post Reply
8 posts • Page 1 of 1

This one makes the Burger King video look weak.


Here is another fine example of the trend of violence in fast food restaurants. Two black females beating the hell out of a white patron, while several black employees stand by and watch. One black male manages to provide the facade of assistance to the white victim in this brutal attack.

The two black females exit, then re-enter the store to continue the beating, until a an older white woman att More..

I sure hope those McDonalds employees get fired for doing nothing to protect her... man up and get the f in there... I hate to say this, but race played a part in this...

Look at the 2:09 mark where the girl kicks her head into the wall... that's what caused the seizure.
Find us on Facebook to discover the faces behind the names!
Follow Me on Twitter!
Top

Unreal, they should nail all the people that stood by and did nothing as accomplice's
Top

Not only does the "man" videoing the assault not step up and stop it when the woman starts having a seizure he tells the perps that the police are on their way and they need flee. Sad that the person with the biggest cojones (and sense of decency) there is an old woman.
Deep in the human unconscious is a pervasive need for a logical universe that makes sense. But the real universe is always one step beyond logic.
Top

A McDonald’s worker has taken credit for filming and uploading to YouTube the latest viral video to capture a brutal assault at a fast food restaurant.

The employee, identified as Vernon Hackett on social network accounts, posted the video clip to his YouTube page earlier this week. According to his Facebook page, the 22-year-old Hackett, pictured at right, has worked for McDonald's since September 2009. 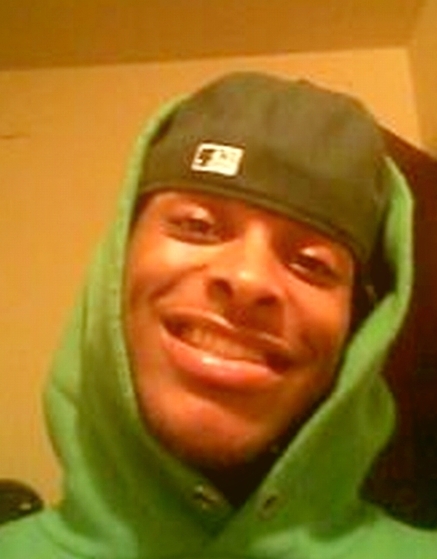 The April 18 assault, seen below, took place at a McDonald’s location on Kenwood Avenue in Rosedale, Maryland, a Baltimore suburb. According to the Baltimore County Police Department, a 14-year-old girl has been charged as a juvenile in connection with the assault, while charges are pending against an 18-year-old woman. “The incident remains under investigation and the State’s Attorney’s Office is reviewing the case,” added investigators.

Police have identified the assault victim as a 22-year-old woman "who appeared to be having a seizure" when officers arrived at the McDonald's at around 8 PM.

A manager at the Rosedale McDonald’s said she was “not allowed to speak to a reporter." In a corporate statement this afternoon, McDonald’s said it was “shocked by the video from a Baltimore franchise,” and called the incident “unacceptable, disturbing and troubling.” The firm added, “We are working with the franchisee and the local authorities to investigate this matter.”

As seen above, in a Facebook posting, Hackett has contended that the woman seen getting beaten in the video was actually a male cross-dresser who got into a confrontation with female patrons when he refused to leave the women’s bathroom at the Baltimore eatery. Hackett claimed that the victim faked a seizure and, when cops arrived at the restaurant, “he got right up.”

Hackett did not reply to TSG messages sent to his Twitter and Facebook pages, which he subsequently deleted late this morning. He also has deleted his YouTube channel.

County police confirmed that the attack occurred April 18 in the 6300 block of Kenwood Ave. Police said the 14-year-old girl has been charged as a juvenile, while charges were pending against an 18-year-old woman.

The victim suffered cuts to her mouth and face, and a police report said she had been taken to Franklin Square Hospital Center in fair condition.

The report classifies the attack as a "second degree assault" — one of the suspects said that the fight was "with a woman over using a bathroom."

As the video spread online, McDonald's acknowledged that the attack had occurred in a Baltimore-area restaurant and said it was working with local police.

"We are shocked by the video from a Baltimore franchised restaurant showing an assault. This incident is unacceptable, disturbing and troubling," the company said in a statement posted on its website. "Nothing is more important than the safety of our customers and employees in our restaurants. We are working with the franchisee and the local authorities to investigate this matter."

State's Attorney Scott D. Shellenberger said the racial dynamics of the incident — the attackers are black, and the victim is white — could result in hate-crime charges.

Somebody has to say it so I guess I will. If that white girl beat that black girl into a seizure it would've been a hate crime. Hate crimes carry stiffer penalties (as they should). What's the lesson here folks? Keep your butt in the car and go through the drive-thru.
Top

Major_A wrote:Somebody has to say it so I guess I will. If that white girl beat that black girl into a seizure it would've been a hate crime. Hate crimes carry stiffer penalties (as they should). What's the lesson here folks? Keep your butt in the car and go through the drive-thru.

It's being looked into as a hate crime because he/she self identifies as transgender. They haven't made the determination of whether it will be changed as such as far as I know.
Deep in the human unconscious is a pervasive need for a logical universe that makes sense. But the real universe is always one step beyond logic.
Top


ROSEDALE, Md. - An 18-year-old woman has been charged in an attack on a transgender woman over using a McDonald's restroom in a Baltimore suburb.

A video of the April 18 fight posted online shows an assault by two young women on 22-year-old Chrissy Lee Polis.

Polis told The Baltimore Sun that before she was attacked she heard a teen say she was a man using the women's restroom. According to charging documents, a 14-year-old girl charged as a juvenile in the case told police that she and Brown fought with Polis over using the restroom.

A rally condemning the attack is set for 7 p.m. Monday outside the restaurant in Rosedale, Md.

"The democracy will cease to exist when you take away from those who are willing to work and give to those who would not."
-Thomas Jefferson
Top
Post Reply
8 posts • Page 1 of 1