A place to rant and rave about all the current gaming titles!
Post Reply
72 posts

Just wanted to let our forum members and guests know that our first anual Legit Workshop will be taking place this Saturday in St. Louis, Missouri. As a sponsor of the Warfactory LAN Party Series, Legit Reviews is happy to announce that we will be attending the event and holding a one hour workshop for the gamers who attend. We will also be covering the latest in hardware technology.

Legit Reviews has received hardware donations from ABIT, Corsair, Intel, Kingston, and Thermaltake for the event.

Together the above companies donated $1,800 worth of prizes for the first Legit Workshop!

We will also be handing out T-Shirts from nVidia and Intel, plus some hats that Corsair Memory sent out for you guys. We of course have some swag (stickers, case badges, pens, stress balls, screwdriver kits) that the above companies also sent out.

Prizes will be given out via contests that will take place during the event. There will be a 3DMark2001 contest and a memory breakout contest that will take place to win a some of the above prizes. The grand prize is the Intel 560J processor and it will be given out to the winner of our trivia contest. Better brush up on your computer hardware facts!
Top

I know im comming driving up from Nashville starting at 5am on Sat. So get your asses there !
"Don't open that! It's an alien planet! Is there air? You don't know!"
Top

A little far, unless you wanna call alaska airlines and see if they want to donate a ticket from Seattle to St. Louis

Too bad I'm working -- not to mention I live way up here in Calgary -- but sounds like it will be a great event.

why in the world would I leave Las Vegas?
Top

I'll be there... but its only like 10 minutes from my house

... however, if any of our readers in the ~2-3+ hour range from STL are thinking about making the drive, I know it will be worth it!
Justin West
Server Admin & Forum Moderator
Follow me on Twitter | Find us on Facebook
Top

I honestly dont think a drive of a few hrs is much of anything, i know its going to be fun so im willing to drive 5 hrs. the best part is its my friends car. but then i agreed to drive mine to Quakecon in Dallas

"Don't open that! It's an alien planet! Is there air? You don't know!"
Top 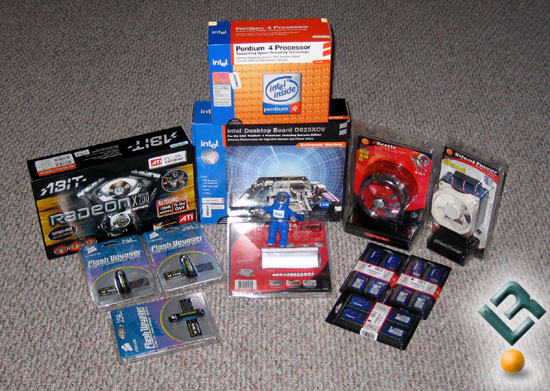 All the hardware has arrived as of this afternoon!

Everyone is going to be walking away with something!
Top

Completely and totally awesome. As the the spokesman for the Warfactory Team, we can't thank you enough!

Also, for those of you from this forum who are going, please make sure to register prior to the LAN and pre-pay if you want to save yourself a few bucks.

Will do, im going to reg myself and my friend then.

reg'ed under infinitevalence, and Tourec
"Don't open that! It's an alien planet! Is there air? You don't know!"
Top

I wanted to thank the crew here at LegitReviews as well as the team at Warfactory for putting together an awesome event.

As I wandered around and looked to see what people were playing I saw lots of CS:Source action, Call of Duty fragging and a host of other games going on. If it could be played by more than one person it was probably running at one point or another.

I enjoyed seeing all of the various hardware that people brought.. All the different cases and peripherals. Lots of sweet PC's with horsepower to spare, SFF's and at least one other person gaming on a Radeon 9700 equipped laptop

It was also a blast to get a chance to hear the team at LegitReviews speak, offer their opinions and interact with the attendees. The give-aways were top notch and the method of giving away prizes was very creative - I'll bring a spare DIMM, HSF and roll of toilet paper (you'd have to have been there) to the next LAN party ;) Was great to hear the chorus of Boo's as the Intel prizes were being described - lots of AMD fans like me in the house!

I wished I could have stayed longer but the girlfriend gave me a hard limit so off I went, leaving this amazing event in my rear view mirror but with plans in mind to return to the next Warfactory LAN party with special guests - LegitReviews in the house!

One of the best events i have ever attended. Fun atmosphere, knowledgeable staff (noteably the Legit Reviews guys on hardware), free stuff, tons of time just to chill out and game with friends. Even though there weren't any tournaments, the hardware seminar and loads of free time more than compensated. My one complaint: the guy next to me won the really nice processor and i had to watch him open the box. The two highlights: 1. watching the guy try to pry his threads on his processor back to normal 2. laughing as the guy try to put that 3 ton heat sink into his case. GREAT job with the LAN guys and hope to see you again next LAN. I had a blast.
Top

Liked the hardware talk, love the cpu I got. looks like I'm going to have to build a hole new system

had fun at the lan, and looking at the stuff you hauled to it. look forward to the next one.

Best lan I have ever been at. I was amazed at how much stuff I took home. I honestly think that we all need a no-frills event once in a while. $12 for all that seems like WF was ripped of a bit. My only regret is that i didn't have BF1942. There is always a new lan comming up.

Hey guys, would also like to thank you for a great seminar and some great prizes. The RAM I won is going to help me out a lot when I build my new system next month.
Top

Great seminar guys. I really enjoyed the push-up contest and the breaking of the memory concept. Very entertaining, and informative. I look forward to more seminars from you guys at future LANs.
Top

Great to see all the support back from the workshop! Here's a pic of the demo system's we brought in, with all the hardware prizes we gave away!! We too are looking forward to the next time we can give another workshop!! 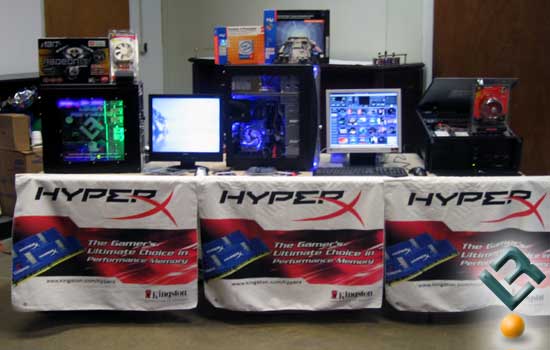 totally sweet, guys. thanks so much

totally cool guys thx for the card maybe some day i can have my benchmark in the dble digits lol , thx
Top

I just wanted to say that it was a pleasure coming out and speaking at the War Factory LAN Party. I hope everyone was able to have fun and learn a bunch about the hardware industry as well as the products we all loved.

Contest: "Break Your Memory"
Ever get sick of all those blue screens? Low Memory errors driving you crazy? Never been able to run 2-2-2 timings? Legit Reviews offered some Kingston PC-3200UL Memory to anyone that wanted to break out their old memory for some new! Over 20 people entered the random drawing and, well... you can only guess what happened. You needed to be there! Push-ups for hardware: A 3lb Thermaltake Heat Sink Took over 50!
I bet you never thought you'd have to drop and give 50 for a heat sink. A few dropped during the hard count, but one made it to take the prize! The Proud Winner after his workout:
Nathan giving out the Thermaltake Heat Sink to the winner. With a mad dash for 1 square of TP the winner comes through via the women's bath room!
The first person to bring back 1 square (un-ripped and only one) was the proud winner of an Intel D925XCV reference board. The winner out smarted the big group into the guys bathroom and went into the womens... No women were harmed or frightened during this contest! Contest: "Slowest 3DMark2001SE Score"
Instead of giving away a video card to the person with a decent one already we ran a contest looking for the lowest score (we didn't tell them this) and in the end we had a winner. With a score of 4400 we have a winner for an ABIT X700 Pro 128MB Video Card! Here Yves gives out the prize! Contest: Who Wants A Silent Video Card HSF?
We offered the Thermaltake Silent VGA heatpipe cooler for anyone wanting to convert on the spot. We had a taker and out came his card!

Installing the new hardware with the assistance of the Legit Reviews Staff over his shoulder. Note the Corsair screwdriver... SWAG being used! LAN Party Frags were going on the entire time!

Speaking for all the Legit Reviews staff we had a blast at the War Factory LAN Party here in St. Louis. We look forward to holding additional workshops and LAN Parties and maybe once or twice a year giving out hardware from the companies that back the gamers of St. Louis, Missouri and the midwest. LR also got a good idea of what the local community has questions on and this will help create better articles.

Till next time! Time to think up more interesting and unique contests!
Top
Post Reply
72 posts