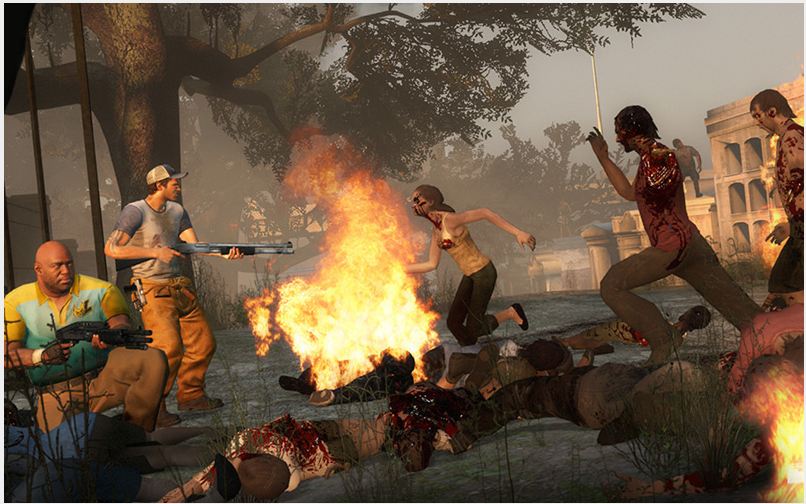 Valve has finally taken all the wraps off of the Left 4 Dead 2 demo. It's a little complicated, so you may want to sit down.

The demo itself will contain a section of the "Parish" (the 5th of 5 campaigns apparently) which can be played by up to 4 players at once (with 2 player split screen on the 360 demo). Enough to give you a sense of the new weapons and infected in the game. But when will you get to play the demo? That's where things get complicated.

If you pre-ordered the game - on either the Xbox 360 or Steam - you'll be able to play the demo starting on October 27.

If you play on the PC, or have a Gold subscription to Xbox Live, you'll get the demo on November 3.

Silver members of XBL will finally get the demo a week later on November 10.


Left 4 Dead 2, the sequel to the best-selling and critically-acclaimed co-operative multiplayer thriller, promises to set a new benchmark for co-operative action games and become one of 2009's marquee titles. Set for release on November 17, the title adds melee combat to enable deeper co-operative gameplay, with items such as a chainsaw, frying pan, axe, baseball bat, and more. Featuring new Survivors, boss zombies, weapons, and items, Left 4 Dead 2 offers a much larger game than the original with more co-operative campaigns, more Versus campaigns, and maps for Survival mode available at launch. Left 4 Dead 2 is targeted for release on Xbox 360 and the PC on November 17, 2009.

I will try out the demo, but probably won't buy the game.
----
Andy

You would think they would release the demo for all at the same time.
Top

It was allright. A few things I was dissapointed with. Major thing I was hoping for was the melee weapons to be an additional weapon slot and not replacing one of your firearms. Sorry I am not going to ditch a shotgun for a guitar to melee with unless I am flat out of ammo. I may be mistaken on which weapon slot it takes up but it does take up one and if it takes away the pistol that is just worse. The game looked better but thats not the only thing I look for in a game. It helped me decide between l4d and modern warfare 2 and I will be picking up the latter.
Top

I have a really Biased opinion of the game because it takes place in N.O. (note here) the sounds on the weapons are very strange, sound fake for some reason, just nothing like any other game, the few new special infected are kinda cool, and i love that the witch walks around rather than just sit in one place. the Defibrillator(bring people back to life and half-health) and adrenaline shots(walk a little faster, like pills if they were in turbo mode) are a cool addition. i still dont know what the boomer bile is for tho

here are some comparisons to real life(why i'm biased)

but just try out the demo, it's free, and it'll give you a feel for the game

vicaphit wrote:I tried the demo, and I was not impressed. It felt like L4D 1.5.