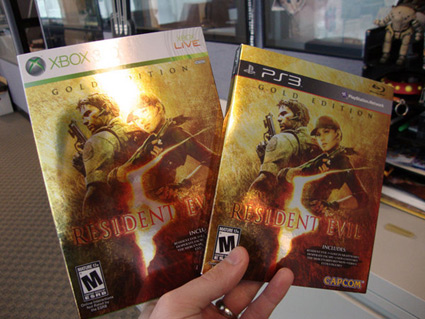 Only previously viewed during cut scenes of Resident Evil, now play through the events leading up to the moment Chris Redfield thought he lost his partner forever. Play as Chris Redfield or Jill Valentine and journey back to the infamous Spencer Mansion from the original Resident Evil. Try and solve its treacherous puzzles and search to uncover the secrets held inside.

A fatigued but rescued Jill has collapsed. Awoken by BSAA agent Josh Stone, play through their desperate escape from the Tricell facility, fighting off unrelenting waves of enemies in heart pumping blockbuster action as they race to assist Chris and Sheva in their final showdown with Albert Wesker.

Players can experience Resident Evil 5 in a whole new way with four new character costumes which allow additional playability through both gameplay and cut scenes.

A new refresh of Mercenaries Mode, The Mercenaries Reunion brings 8 new playable characters and weapon load outs into the fray, providing players with additional challenges as they aim to shoot down as many enemies as they can within a limited time. Chain together your kills, extend your time and rack up the points. Featuring the most extreme weapon selections, The Mercenaries Reunion provides hours of new strategy induced kill sprees.

Take control of Chris, Sheva and other Resident Evil 5 favorites in online battles of up to four players. Fight along or in a team in four different varations.

You thought your collection was done? Feast your eyes on some nice new figurines to acquire.