by Digital Puppy
Today, the 7th patch for StarCraft II Beta is out (version 0.9.0.14621B) that addresses static defenses and lowering the hard counters. Also, missile turrets look to be more useful now. All you Beta Testers, go out and grab this one! 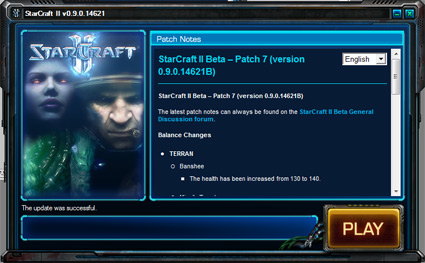 The latest patch notes can always be found at http://forums.battle.net/thread.html?to ... 6&sid=5000


* Fixed an issue in which players would desync when matched against others with certain CPUs.

by Krab
It's good that they're constantly making tweaks to perfect the game, for those that have a key

by nightblood
Anyone playing the beta?
How is it so far?

nightblood wrote:Anyone playing the beta?
How is it so far?

I'm playing...I suck at it, but it's kind of entertaining. For those who like the first StarCraft, I don't think the gameplay has changed or was upgraded that much from the original...the graphics are very good so there is a ton of eye candy.
All times are UTC-06:00
Page 1 of 1
Powered by phpBB® Forum Software © phpBB Limited
https://www.phpbb.com/