You can find all the latest computer hardware press releases in here.
Post Reply
8 posts • Page 1 of 1

Google has announced that it is rolling out Google Buzz to everyone's GMail accounts over the next few days. At first glance, Google Buzz seems to be the first step by Google to introduce some if its Google Wave features into GMail. Other media outlets are also noting that Google Buzz is also Google's first step into the Facebook and Twitter realm of real-time status updates. Check out this video for a quick demo.


Google Buzz is a new way to start conversations about the things you find interesting. It's built right into Gmail, so you don't have to peck out an entirely new set of friends from scratch — it just works. If you think about it, there's always been a big social network underlying Gmail. Buzz brings this network to the surface by automatically setting you up to follow the people you email and chat with the most. We focused on building an easy-to-use sharing experience that richly integrates photos, videos and links, and makes it easy to share publicly or privately (so you don't have to use different tools to share with different audiences). Plus, Buzz integrates tightly with your existing Gmail inbox, so you're sure to see the stuff that matters most as it happens in real time.

Have any readers received the Google Buzz option in their GMail account yet? I haven't gotten it yet. Once you get the option, let us know what you think!
Justin West
Server Admin & Forum Moderator
Follow me on Twitter | Find us on Facebook
Top

Not yet. I haven't used wave since you first sent me the invite. Haven't found a use for it yet.
Joe
Top

yeah I got it... Nothing special and to be honest I hope it doesn't take off.. Twitter, Facebook, Myspace and e-mail is enough to keep up with... This is getting to be too much. 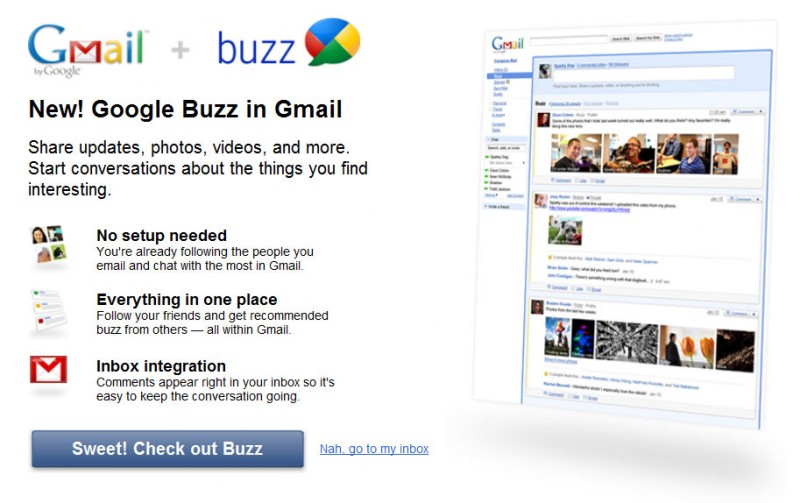 I logged in and got the same screen. Looks like google's version of twitter/facebook. Meh. I agree with Nate.
Joe
Top

Ya, I feel the same way too... but, I think facebook is at its peak and something bigger and better will eventually replace it... already happened with myspace on a lesser scale.

Speaking of which, Nate, you still use MySpace? do you hear crickets yet? lol... I never opened a MySpace account... thought it was ugly.
Justin West
Server Admin & Forum Moderator
Follow me on Twitter | Find us on Facebook
Top

I was just playing with it...you can also follow sites and it looks like updates to the site will populate your buzz (I have a site that uses google RSS)
Joe
Top