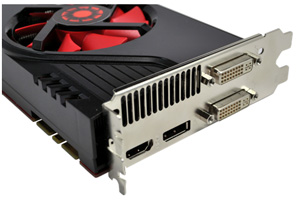 Gainward GeForce GTX 470 GOOD Edition supports all NVIDIA state-of-the-art graphics technologies, designs in complete adoption of all Microsoft DirectX 11 hardware features from ground up, delivers stunning realism with tessellation and ray-tracing, fully utilized its parallel computing power of 448 CUDA cores distributed in 14 tessellation units, implemented 32x anti-aliasing mode for the highest level of image quality and real time PhysX. What any hardcore gamers cannot live without it is 3D Vision Surround in SLI configuration. Words are not enough. Immerse yourself in front of three full HD monitors. You will enjoy shooting enemies, at the same time, busying dodging from debris throwing at you. See it, Play it, Love it! 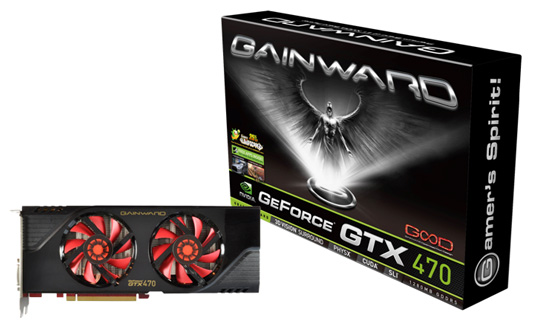 Gainward Grand-Prix Heat-Pipes Hybrid Cooler, was designed in 6 mm copper-water heat-pipes on a copper base conducting heats away from GPU at highest efficiency, then dissipating onto aluminum heatsinks, which are forced ventilated with Great 8 cm double-ball-bearings Twin Fans (2GR8). Achieve highest efficiency cooling performance up to 10˚C lower at power saving mode, 12˚C lower at full load with respect to reference GTX 470, run at 6dB quieter, mere one fourth (1/4) of loudness than reference GTX 470 at full load (measuring distance at 30 cm, ambient noise at 33dB). Gainward award winning Grand-Prix cooler, 2GR8, 2COOL! Another important feature’s worth mentioning is Gainward GeForce GTX 470 GOOD edition is a strict 2-slot design for full compliance of 3 Way SLI to differentiate from others who work in 2.2 even 2.5 slot, which may run into mechanical interference or overheating due to poor ventilation.

Rugged Cap, Full Solid-State OS-CON capacitors
Gainward designs in only with the highest quality components to ensure excellent stability at extreme conditions, no one piece of Gainward GTX 470 was shipped without surviving from critical burn-in tests. High quality low-ESR solid-state OS-CON capacitors are used to improve overclockability and robustness even at critical environments.

Best C/P DX11 High-end Cards of All
Gainward has done the homework raced against its big brother GeForce GTX 480 and its rival Radeon 5870 & 5850. The result is rather exciting. Without a doubt, GTX 480 pulled the highest score above all, while GTX 470 outperforms 5870 up to 15%, and whopping 37% faster than 5850 at normal settings.
Performance wise, GTX 480 is an absolute king of graphics. When it comes down to C/P, Gainward GTX 470 grabbed the best C/P (Unigine Score/MSRP at 1920x1200 resolution) spare a lot of headroom against HD 5870 & 5850. More benefits will be revealed when more DX11 gamers rolled out using tessellation, interactive raytracing, real-time PhysX features. Furthermore, new Fermi architecture has triggered a graphics revolution with 3D entertainment not only for gaming, also Blu-ray 3D will soon become a standard gear for Home Theater PC taking advantage of 3DTV Play.

Free Applications bundles: See it, Play it, Love it!

Supersonic Sled
Strap yourself to a rocket – and get ready to experience serious G-forces.
A great example of how combining PhysX simulation, CUDA and DX11 hardwaretessellation delivers a glimpse into the future of realistic and
interactive game play.
Design Garage
Interact with and create incredibly photo-realistic images of some of the
fastest, most exclusive vehicles on (and off) the road through CUDA
accelerated ray tracing. Each 3D model has an assortment of
customizable parameters – so you control the look and feel of the
materials, the lighting, and even the scene. Once you have satisfied
your imagination, capture the moment and share the photo-realistic
vehicle image with the world.
Super LoiLoScope
Super LoiLoScope is a user-friendly and super-fast video editing
software that utilize CUDA engine of your new GAINWARD Graphics
card to its full potential. You may organize, combine multiple videos or
place special effects on them up to 10X more efficient than non-CUDA
graphics! Then save to various formats and watch on-the-go with your
portable devices (iPod, iPhone, etc.) or to share on youTube as easy
as just one-click! Download and experience 30 days trial for free. To
purchase full version of Super LoiLoScope with voucher gets 25%
discount (MSRP $88) special for GAINWARD valued customers. 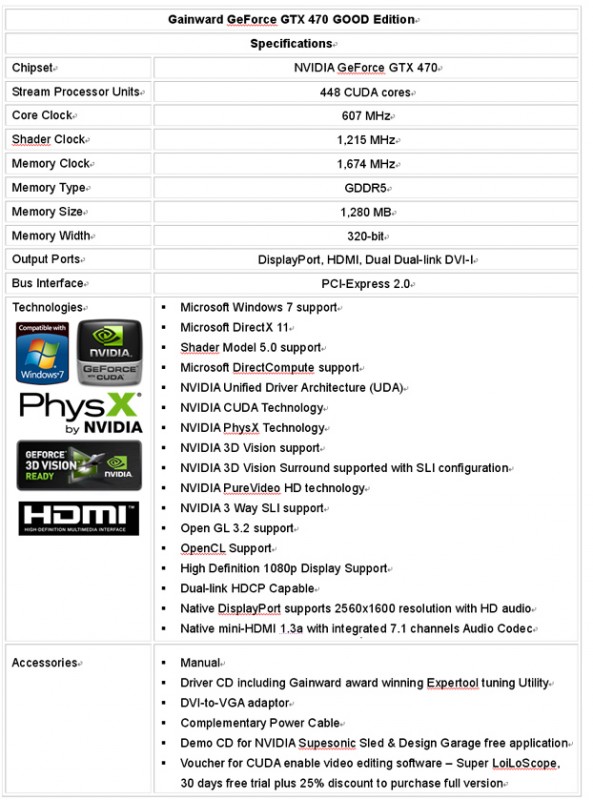 About Gainward
Gainward was founded in 1984 with a commitment to develop the most advanced graphics accelerators in
the industry and ensuring the highest level of customer satisfaction. Received great reputation for
manufacturing of leading edge products for the enthusiastic market. Gainward “Golden Sample” (GS) and
“Golden Sample Goes Like Hell” (GS-GLH) are two signature synonyms for aggressive overclocked and
extreme overclocked graphics cards in the gaming society. As one of the top graphics cards leading brands,
Gainward continues to provide cutting edge products with excellent quality. Furthermore, Gainward brand
name symbolizes our belief in gaining trusts and respects from our valued customers. With Headquarter
based in Taipei, Taiwan, factory in Shenzhen, China and European Headquarter in Munich, Germany.
Gainward is ambitious to address worldwide market and cooperates closely with its globally localized
channel partners.