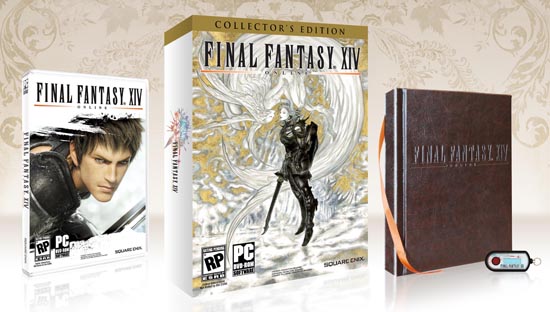 In advance of the September 30 release, FINAL FANTASY XIV PC Collector’s Edition will offer early access to adventurers eager to embark on this new chapter in the FINAL FANTASY series. In addition, the Beta phase for the Windows PC version will begin in early July 2010.


Standard Edition preorders will include a reward code to receive an exclusive in-game item, the Garlond Goggles.*


IN-GAME ITEM – Collector’s Edition preorders will include a reward code to receive an exclusive in-game item, the Onion Helm.*

EARLY ACCESS – Play 8 days prior to the release of the Windows PC Standard Edition (timing of access subject to initial server capacity).

BEHIND-THE-SCENES DVD – Get an insider look at the making of FINAL FANTASY XIV, with exclusive video content, interviews and more in this special documentary DVD.

SECURITY TOKEN – A FINAL FANTASY XIV–branded Security Token for use with your regular password.

RIGHT OF PASSAGE – Redeem a voucher to receive your fully-personalized Right of Passage Certificate, each stamped with a unique serial number.

* FINAL FANTASY XIV PC Collector’s Edition pre-orders will include the Onion Helm, an exclusive in-game item which accelerates character recovery after falling in battle. FINAL FANTASY XIV Windows PC Standard Edition pre-orders will include a pair of Garlond Goggles, an exclusive in-game item which increases the speed of skill progression.

“This September, players around the world will join together to explore the fascinating and exciting realm of Eorzea,” said Hiromichi Tanaka, Executive Producer of FINAL FANTASY XIV. “We’re presenting players with a new style of online gameplay that we know will please avid fans of online games, while welcoming more casual gamers with a variety of gameplay and story-driven content.”

FINAL FANTASY XIV will become available for preorder at certain retailers from today.

Those who have registered their PlayStation® 3 computer entertainment system version FINAL FANTASY XIII Campaign Codes can now choose to apply this code to the Windows PC version of FINAL FANTASY XIV. These players will also receive a pair of Asuran Armguards, an exclusive in-game item which enhances the effectiveness of their characters’ equipped arm or tool.

In the past, the city-states battled tirelessly, vying for domination and hegemony. Death-mongering beast tribes pillaged the land unchecked, leaving only destruction in their wake. Unseen enemies lurked beyond the borders, striking at the slightest provocation or show of weakness. The history of Eorzea is a tapestry woven of war and strife, stained with the blood of those gone before, and the tears and ash of fallen endeavor.

And yet the love the gods bear this unforgiving land endures, now as always. What is the allure of this seemingly forsaken place? With what hope and to what end do would-be inhabitants journey here to live out their days?

The answer lies with that which gives form to Hydaelyn and all myriad creation in it – crystals. The cornerstone of all things, it is these crystallized manifestations of the aether that beckon the people to come, risking all in the undertaking.

And so it is that adventures too have harkened the call – to bear witness to the epic set to unfold in this land. This Eorzea.

· In-depth character creation – Choose a race and clan before going on to customize your avatar’s face, hairstyle, skin color and more, with subtle adjustments allowing for limitless possibilities.

· The Armoury System – With defining emphasis on the game’s weapons and tools, the Armoury System is a unique class system that influences both character development and an individual’s style of play. With it, players have the flexibility and freedom to fight, craft and gather whenever and however they so choose. Simply equipping an item will automatically cause the character to take on the class associated with it.

· Solo or party play – Adventure alone or in the company of others as you undertake quests and engage in battles on your travels through Eorzea.

The next beta test phase is schedule to begin in early July. For more details on how to participate in the beta test, visit http://entry.ffxiv.com/na.

The required specifications for the Windows PC Beta Test are now available.

The requirements below may change at the time of retail launch. Please visit the official site periodically for the latest information.

Download: Space on the hard drive where My Documents is located should be 6GB or more ****

** If using Windows XP, the executable files, installation and version updates should be set to Administrator settings.

**** The file system in the drive containing the My Documents folder will need to be set to NTFS formatting.

More information on Square Enix, Inc. can be found at http://www.square-enix.com.

They haven't even started a closed beta yet for it though