Energy consumption reduced by up to 40 %; direct utilization of waste heat cuts carbon dioxide emissions by up to 85 % 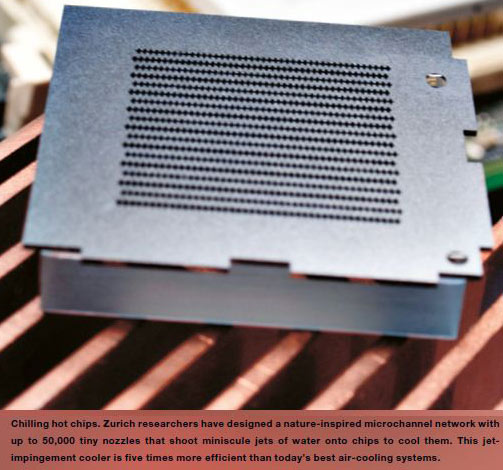 ZURICH, - 02 Jul 2010: IBM (NYSE: IBM) has delivered a first-of-a-kind hot water-cooled supercomputer to the Swiss Federal Institute of Technology Zurich (ETH Zurich), marking a new era in energy-aware computing. The innovative system, dubbed Aquasar, consumes up to 40 percent less energy than a comparable air-cooled machine. Through the direct use of waste heat to provide warmth to university buildings, Aquasar's carbon footprint is reduced by up to 85 percent.

Building energy efficient computing systems and data centers is a staggering undertaking. In fact, up to 50 percent of an average air-cooled data center's energy consumption and carbon footprint today is not caused by computing but by powering the necessary cooling systems to keep the processors from overheating – a situation that is far from optimal when looking at energy efficiency from a holistic perspective.

The development of Aquasar began one year ago as part of IBM's First-Of-A-Kind (FOAK) program, which engages IBM scientists with clients to explore and pilot emerging technologies that address business problems. The supercomputer consists of special water-cooled IBM BladeCenter® Servers*, which were designed and manufactured by IBM scientists in Zurich and Boblingen, Germany. For direct comparison with traditional systems, Aquasar also holds additional air-cooled IBM BladeCenter® servers. In total, the system achieves a performance of six Teraflops** and has an energy efficiency of about 450 megaflops per watt. In addition, nine kilowatts of thermal power are fed into the ETH Zurich's building heating system. With its innovative water-cooling system and direct utilization of waste heat, Aquasar is now fully-operational at the Department of Mechanical and Process Engineering at ETH Zurich.

"With Aquasar, we make an important contribution to the development of sustainable high performance computers and computer system. In the future it will be important to measure how efficiently a computer is per watt and per gram of equivalent CO2 production," said Prof. Dimos Poulikakos, head of the Laboratory of Thermodynamics in New Technologies, ETH Zurich.

The processors and numerous other components in the new high performance computer are cooled with up to 60 degrees C warm water. This is made possible by an innovative cooling system that comprises micro-channel liquid coolers which are attached directly to the processors, where most heat is generated. With this chip-level cooling the thermal resistance between the processor and the water is reduced to the extent that even cooling water temperatures of up to 60 degrees C ensure that the operating temperatures of the processors remain well below the maximally allowed 85 degrees C. The high input temperature of the coolant results in an even higher-grade heat at the output, which in this case is up to 65 degrees C. Overall, water removes heat 4,000 times more efficiently than air.

"With Aquasar we achieved an important milestone on the way to CO2-neutral data centers," said Dr. Bruno Michel, manager of Advanced Thermal Packaging at IBM Research – Zurich. "The next step in our research is to focus on the performance and characteristics of the cooling system which will be measured with an extensive system of sensors, in order to optimize it further."

Aquasar in the service of research

Aquasar is part of a three-year collaborative research program called "Direct use of waste heat from liquid-cooled supercomputers: the path to energy saving, emission-high performance computers and data centers." In addition to ETH Zurich and IBM Research - Zurich, the project also involves ETH Lausanne. It is supported by the Swiss Centre of Competence of support for Energy and Mobility (CCEM).

**Based on the High-Performance LINPACK Benchmark.

ETH Zurich has come to symbolise excellent education, groundbreaking basic research and applied results that are beneficial for society as a whole. Founded in 1855, ETH Zurich has more than 15,000 students from approximately 80 countries, 3,400 of whom are doctoral candidates. Today, it offers researchers an inspiring environment and students a comprehensive education as one of the world's leading universities for technology and the natural sciences. 21 Nobel Laureates have studied, taught or conducted research at ETH Zurich, underscoring the excellent reputation of the institute.