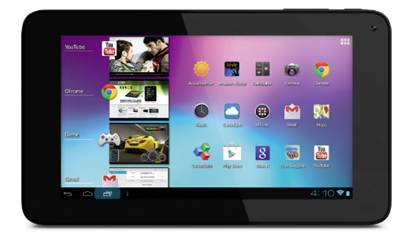 
January 3, 2013 – Coby Electronics Corporation today announced the addition of the company’s brand-new Android™ -powered MID7065 that will feature both Google Play™ and Google Mobile™ Services and will begin shipping in Q1 2013. Coby will showcase its latest tablets along with the company’s newest LED TVs, Bluetooth™ products and more at the Consumer Electronics Show, Booth #12027 in the Central Hall of the Las Vegas Convention Center, January 8-11, 2013.

“We’re thrilled to introduce our new MID7065 and to add this standout model to our popular, feature-packed range of Internet tablets,” said Ian Kolker, Product Manager, Coby Electronics. “Coby MID7065 owners will be able to immediately access and enjoy hundreds of thousands of today’s hottest apps and games as well as the most sought-after Google services all on one compact and competitively-priced device.”

The Coby MID7065 (MSRP $149.99) will give users direct access to the latest Android apps on Google Play as well as Google Maps™ for Android, Gmail™, Chrome™, YouTube™ and more. Additional features of the new 7” Android 4.0 tablet include:


About Coby Electronics Corporation
Headquartered in Lake Success, New York, Coby Electronics Corporation is a leading supplier of quality consumer electronics products. Since its inception in 1991, Coby has risen through the ranks of the consumer electronics industry. Today, the company is redefining the way consumer electronics products are created, emerging as an industry leader in a challenging economy. With an understanding of its customers’ needs and desires, Coby has developed a strategy of maintaining a competitive cost structure in the industry without compromising the quality of its products. Within the past decade, Coby’s team of inventors, engineers and designers have earned a number of U.S. patents and design awards, with several additional patents pending. For more information, visit Coby Electronics and follow the company on Facebook and Twitter.