Here you can find out about our Folding Team! Our goal: to understand protein folding, protein aggregation, and related diseases
Post Reply
845 posts

The 2009 [email protected] WAR will begin tonight at midnight. This means when the clock strikes midnight that the war has officially begun. We will be getting the stats from Extreme Overclocking, so if you want to know what time zone we are starting or want to count the points yourself you can follow along. 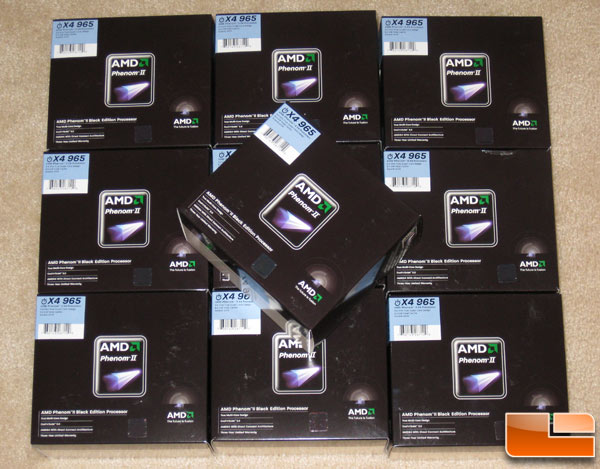 Teams will be broken down into groups of six folders. The prizes for this contest have all been graciously donated by AMD, which is very nice of them. AMD has supported Legit Reviews since we opened our doors back in 2002 and they continue to step up to the plate during contests like this. The processors that we are giving away aren't crappy either as they are AMD Phenom II X4 965 Black Edition 'Deneb' quad-core processors. These processors run at 3.4GHz and are very beefy to say the least. These are the 140W TDB processors in case you are curious and have a retail value of $185.99 each. That means we will be giving away nearly $1900 worth of processors!

NB. This team list is subject to change over the first few days while we sort out the teams to be balanced with the fairest ppd across the teams.

Using the other threads as reference I went ahead and broke down the 24 team members that want to compete into four teams of six. If we get five or six more people that sign up tonight I'll have to work up some new teams, but that is okay. The remaining processors will be drawn at random for those that participate even if you don't make it onto an actual team!

The competition will run from December 1st to December 22nd, which is a period of three weeks. At the end of the competition the team with the most points will win and each team member will win a processor. Since LR is in possession of the processors we will be able to ship them anywhere in the world, but taxes, tariffs and any extra costs like that must be paid by the winner.

Almost anything is fair game, from adding rigs, to overclocks, whatever you want. If you get someone else to fold, and its not under your name, post it, so we can keep them on the standby list in case someone quits, breaks down or something like that.

Folding starts at with the 12/1/2009 3AM EOC Folding Stat Update, so get everything ready!

Any questions feel free to ask! If you volunteered to handle the stats pages please post links to where they will be!

Who: Anyone who runs [email protected], and would like to participate, Reply to this thread in this format:
folding name - average ppd expected during the event
Team Number: Legit Reviews Folding Team #38296

good luck to all the new teams, and sorry for all the confusion, if you still want to join you still can just post up your username and ppd

Hmm, 5000PPD. No way can I do that, unless I leave my rigs on 24/7. I can't do that though since electricity costs so much during the weekday afternoons. Guess I gotta recruit my friends and maybe fold on the laptop...

What will you be putting down?

Man, I'd really like to join but I don't even have my rig yet! That and I'll be gone more than 200 days out of the year

Really wish I could participate though! I'll most definitely still Fold once I get my rig, but I'll have to bow out of the competition

That's only on the weekends when electricity is cheaper. I can easily do 7k or more PPD if I folded 24/7, including my laptop. Just that electricity is pretty expensive during the day, thus the rigs have to be turned of when I'm not home. I can put out a minimal 3000PPD. As you can see from the chart, there's a sharp rise in PPD during the weekends and holidays when electricity is cheaper or if the rig is left on because I'm using it. Guess I'll leave my rig in sig on when I sleep as well, just for the folding war.

Sovereign - yeah, if we can get five more guys to sign up I'll make a 5th team or if we get four more to sign up I'll re-arrange the four teams and add an extra member to each team.
Find us on Facebook to discover the faces behind the names!
Follow Me on Twitter!
Top

Sovereign - yeah, if we can get five more guys to sign up I'll make a 5th team or if we get four more to sign up I'll re-arrange the four teams and add an extra member to each team.

Can I get in on this?
Folding Name - Bhelms.

Not sure of my PPD. Haven't folded in a while. GTX 260, can fold maybe 15 hours a day. might recruit some friends. If you have any idea what that may yield, lemme know

it's about to be on.

How do i join into this? i don'tknow how many points i can make, since i've never folded before, and i only have a netbook =(, but i would like to participat nonetheless
Top

Craigmcl PPD: I have no idea I've run [email protected] for years on and off but always had it anonymous till now.
Top

I suppose I better get my cpu folding again

eden999 wrote:How do i join into this? i don'tknow how many points i can make, since i've never folded before, and i only have a netbook =(, but i would like to participat nonetheless

Read the first post please. However, netbooks won't do you much good....Probably like 60PPD max? I wouldn't fold on a netbook if I were you.