Anything and everything software related that doesn't fit above can go in here!
Post Reply
3 posts • Page 1 of 1

A new version of GPU-Z is out! Grab it if you want to use the latest and greatest - http://www.techpowerup.com/downloads/1788/mirrors.php 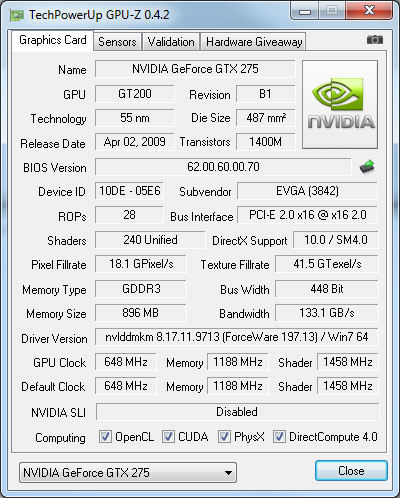 •Fixed an issue on all NVIDIA cards that would sometimes cause them to lose fan control when GPU-Z is running. Please don't run pre-0.4.2 and 0.4.2 at the same time, this might result in incorrect readings in the 0.4.2 window.
•Fixed system crash on MSI HD 5830 TwinFrozr II
•Validation upload now uses Unicode for entered name
•Reverted memory bandwidth calculation introduced in last version. It introduces too much confusion, we will go with what all companies use in their marketing material, even though we believe it is not correct. Using power of 10 again now, 1 GB/s = 1,000,000,000 Bytes per Second.

There was a critical bug in it and it was removed after a few hundred downloads and then this version was released as it was in development with the NVIDIA driver bug fix.
Find us on Facebook to discover the faces behind the names!
Follow Me on Twitter!
Top

Good to know the update link is here.