Anything and everything software related that doesn't fit above can go in here!
Post Reply
8 posts • Page 1 of 1

Mozilla has released Firefox 7.0(Aurora 7.0) to the Aurora channel.

wow... They said on the blog that an average user would see 30% less memory usage. Well, I opened all 117 of my bookmarks to see what would happen between Firefox 5.0 and Firefox 7.0a2 and the results were amazing. 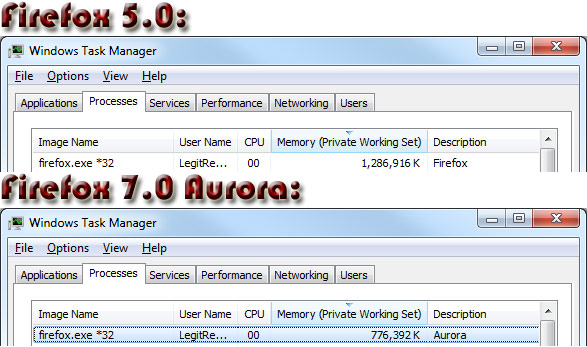 I am not getting that kind of drastic results but i am getting some improvements with Aurora. Dumb question, how in the world are you using such a low memory usage? because I am still using 110K of memory on aurora and am using 140k on Firefox.
Mini ME
Is in a state of flux....
Top

What's with all these new Firefox versions lately... No more updating older versions? Like 3.6.18 and stuff? I still find 3.6.18 the best and I might roll back to that.

The leaps in numbers seem a little weird, but if they're trying to push out more significant updates in shorter time spans, I'm all for it. That memory usage comparison is amazing. Good to see progress made in that area since I've heard a lot of complaints about Firefox greedily eating memory.
Top

was going well until it updated, now facebook won't load, nor will javascript, LR homepage and youtube are HTML only right now, unhappily rolling back to an older version of FF.
-Austin