After much finagling and failures to even get the CPU to OC to 2.5, it seems to be stable at ~2.84 with Prime95 running for the last hour. Aslo, I'm still using stock cooling. I still haven't gotten the hang of adding images and image shack doesn't seem to be taking new members. I have two domains but so far I haven't been able to get images to load from there without simply linking to them in my posts. Maybe one day I'll figure it out.

BIOS Settings:
I lowered the multiplier from stock x12 first to x10 then ultimately x11
Decreased core voltage from stock 1.55 to 1.45
Increased FSB from stock 200 to 264 (any higher caused Safe Mode and subsequent drop to 1.8 GHz)
Increased memory voltage by 0.1v

Still haven't figured out why HW monitor is showing my system fan at 0 rpms. It was showing it @ 1700 a couple of days ago then boom! 0

I'm open to any suggestions that might improve my efforts so far, but I'm pretty happy with 2.8 at this moment 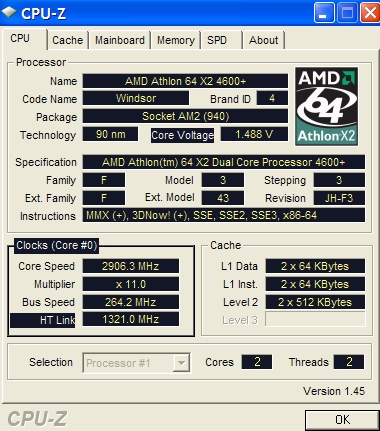 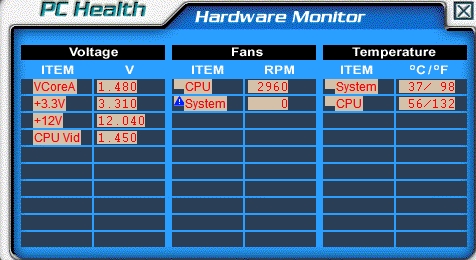 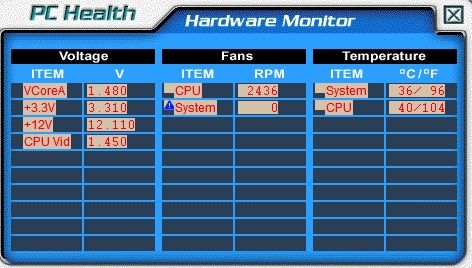 "A payphone was ringing and it just about blew my mind,
when I picked it up & said 'Hello' this foot came through the line"
~Bob Dylan
Top

Thanks! Prime95 just passed the 6 hour mark about 15 minutes ago. CPU temp hovering at 56C but even so, been using my PC off and on all afternoon and yet to experience even a hiccup. (Knock on wood

) Memory's running at 487 MHz. Only thing with Prime95, I've found my test options to be very limited. I can select "Small FFTs" and RAM usage but not much else. Most other options on dropdown menus are grayed out. Still I figure Task Manager is showing CPU at 100% and has for last 6+ hours so it must be working it pretty hard.

It might sound goofy, but the thing that thrills me the most is that MS Word now opens in under 15 seconds. After I installed OpenOffice, Word would take as long as 1 full minute to launch. It's like the two apps were duking it out for supremacy.

Heatsink is not too hot to touch but Northbridge (I think...those two always get me confused

) --anyway the bigger of the two smaller heatsinks and closer to CPU --is not something you'd want to fondle for very long. There's no holes near that heatsink so I don't think I have too many options for additional cooling. But it's frickin' HOT.

Still, all in all, I'm pretty proud of myself, without meaning to sound cocky. It's really thanks to everyone at LR for posting so much useful info and for being so helpful, too. So far, my first serious overclock has gone off without too much drama. Just hope this damn thunderstorm moving in doesn't "rain" on my testing parade, pardon the pun. We've been getting some bad lightning storms in the Buffalo area lately so I've been having to shut down as I no longer have a UPS. Mine kicked the bucket about 8 months ago.

Jack
"A payphone was ringing and it just about blew my mind,
when I picked it up & said 'Hello' this foot came through the line"
~Bob Dylan
Top
Post Reply
3 posts • Page 1 of 1