Want to show off that smoking system or your latest creation?
Post Reply
156 posts

figured id update this abit with pics of the new pc (thanks lr!) and my new desk

plus some new higher res pics from before, cause no one likes 800x600

EDIT: there has been some statements being made about these pics having virus' in them. these are not true:

Alathald wrote:Yeah you're absolutely right there should be no virus in the image and there is not...vb this is probably a preexisting virus on your system, after a bit of looking I found out that "Bloodhound.Exploit.196 is a heuristic detection for files attempting to exploit the Adobe Acrobat and Reader Multiple Arbitrary Code Execution and Security Vulnerabilities." It has nothing to do with imageshack, just a random false positive 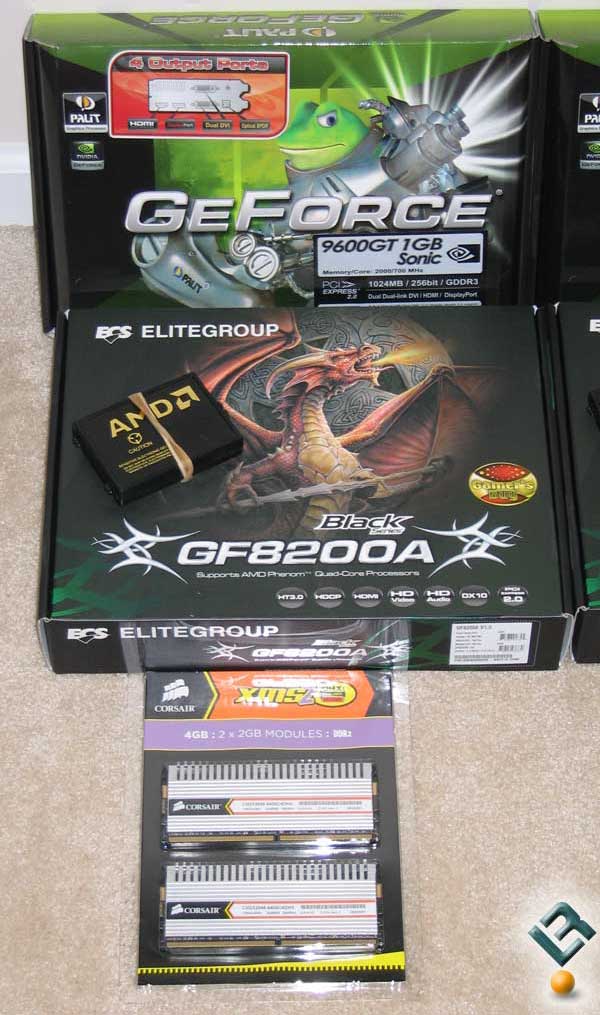 (except for the frog of course

xigmatek HDT cooler (92mm fan) this is my first experiance with enthusiast level air cooling, and since i sliced my pinky half open on a fin when installing the heatsink i think ill stick with water

thats the asus tuner, one ntsc tuner and one ATSC/ClearQAM tuner. havent figured out how to get it to take digital from the wall, but havent tried to hard either

i love it cause its pcie, has a hardware based mpeg-2 decoder (more cpu availible for folding

) and came with a sweet remote

silica in a sealed moisture resistant bag. wow, all i have to say is

with my luck, i should have seen it coming

and to ECS: leaving an expansion slot empty above the graphics card qualifies as a dick move. But thanks for supporting folding!

it was a free board so i can hardly complain

around 4.5-5k worth of computers and related paraphanelia there

and dont get any ideas, its booby-traped

Gehto-mods FTW! as you can see in the pic, one of the fan blades got broke off by a stray finger getting in there

it still worked, but it started to make the whole case vibrate like crazy. my solution? an office-space style stapler (cause of the rubber base) and an ankle weight

it completely silenced the vibration

and now for some higher res copyies of the before and after of the mods:

thats it for now, but my birthday is coming up and im hoping for some water cooling parts

I've come a long way from that original Core2Duo build y'all!

Unless I am mistaken (and my wife thinks thats quite often) that is an f15 on top of the 300.

XstollieX wrote:Unless I am mistaken (and my wife thinks thats quite often) that is an f15 on top of the 300.

Looks like an F35 to me but I'm pretty tired atm

Nice setup btw, you know you love the frog

Alathald wrote:Looks like an F35 to me but I'm pretty tired atm

Nice setup btw, you know you love the frog

I think it looks like one of those as well.

you are leaving a fan with a snapped fin!?!?? find the fin and superglue it back on you crazy person!(i've done that to three fins of a CPU fan on my Athlon XP build, it still works like new)
-Austin

I still say the YF-23 was a better looking jet.
Top

bubba was the only one who was wrong

its an f35a. (you can tell by the fact it only has one engine) and no, i dont love the frog man

I tried to look at your photos martini161, from what I saw they looked great! Picture quality was very good. The down side was that as soon as I tried to enlarge your pics. I was being hacked. So I never saw your photos enlarged.
Top

what do you mean being hacked?
there hosted at imageshack...

I understand and I am not saying it is you. imageshack... as soon as I tried to enlarge your photos my firewall went crazy. I mean it almost bloody shut down my rig.
Top

lol imageshack shut down ur rig?
there's obviously some weird anti-imageshack virus in ur rig.

nah, gonna stick with the 8800gt and volt mod it

Depravity wrote:wutz volt mod? ultra oc?
well even if u do volt mod i still think 4870 is better.
mine runs at 153gb/s

how many fps you get in warhead/crysis? and what res you play at?

With all due respect I tried to enlarge the photos again and it is a virus that the firewall is stopping. I can give you details if you would like. I am not making this up. Natasha is a programmer and she saw the same thing. She told me to tell you guys.