Want to show off that smoking system or your latest creation?
Post Reply
91 posts

While telling a freind over the winter I wanted to build a MAME cabinet with the spare computer parts I had. He said "I wonder what it would be like to play Street Fighter on your 55" or with characters 3 feet tall or more".. that really got the gears turning - leading me to the idea of a projector instead of a old monitor mounted in a huge arcade cabinet. - I mean really who didnt sit at a movie theater as a kid just wondering how awsome it would be to play Mario Brothers on that screen? While the projector I have wont get quite that big. I can still get it to a 25 foot screen. Just need to find a screen/wall to project it on it.

what turned out to be an attempt to build a old school arcade machine with spare parts I had has grown quite a bit.
my adventure in buiding a cheap MAME arcade machine hasnt been so cheap. Here is what I have so far.

The projector can be used for more than just the arcade. Last night we watched Beowolf on a 110' screen.

So what started out as just an arcade cabinet - I've decided to turn into a mobile gaming/theater/computer. And I say mobil loosly- more like something I can roll around the house if need be. But would be secure enough if i wanted to take camping and needed to haul it. whats camping with out being able to play Pac-Man on a 6 foot screen...

If anyone can think of something I might have missed - or has any ideas on how to go about building the cabinet I would like to hear your thoughts.

Also, do you guys see any problems mounting the electronics to wood? ie:motherboard, PSU- I have a case i could strip down if need be but would rather not if i didnt have to.

I'll keep you guys posted on the progress. I hope to start building in about two weeks.

Playing games on bigscreen really is fun, the first time I played my wii was on a massive lecture theatre projector screen

Mounting hardware to wood should be fine, PCs don't get hot enough to spontaneously combust wood

i remeber playing maden on an 80 inch projector screen. the players were bigger than life size, it was sick!

well i think i figured out what speakers I will be using. I hit up some rummage sales over the weekend and found someone selling a speaker box they made. I really just wanted the speakers but i had to take it all. So it has a 10inch subwoofer and (2)6x9 speakers with built in tweeters. I hooked it up when i got home to see how it sounded. I was plesently surprised - I didnt expect the sub to work since i only had the pos/neg for the 6x9 commin out of the box- but somehow the sub was hitting surprisingly well also. I cant wait to tear the box apart to figure out exactlly how this works. -- all for the low price of $5 american..

Then only problem with projectors is that the color isn't very great. We used to borrow projectors from our college's media center and system link with Xboxes... damn that was fun!
----
Andy

Sounds cool! I built my MAME box a few years ago and spent around $800 after it was all said and done. Of course I'm only on a 24" screen, so no big screen goodness.

For my project I knew very little about what all it entailed going in, but since then I've learned quite a bit. The material I used was 5/8" MDF. I only had one board that needed to be mounted to the MDF and I used little plastic feet to screw into it. I will say that the cabinet is pretty darn big and sturdy.

So you are trying to make yours portable? What kind of dimentions are you looking at?

For anyone interested in doing this I found "Project Arcade: Build Your Own Arcade Machine" to be a very useful book. Lots of tips, tricks, and hacks. I also got a few parts off of eBay and was able to save some coin and got some darn good hardware.

The board I spoke about is here: http://www.ultimarc.com/ipac1.html It shipped from England and got to me in 4 or 5 days.

Anyway, good luck with your build, sounds fun!
I would never die for my beliefs because I might be wrong.
~Bertrand Russell
Top

I'll have spent under $500 once its all said and done - not to bad but about $400 more than what I had in mind going in.. obviously the upgrade to projector is a big part of the cost.

by portable it just needs to easily roll. So just some small wheels that I can lock on the bottom. I am thinking I will be making it about 3.5ft(H)x 1.5ft(W)x 2.5ft(L) that should give me plenty of room for everything.

something I am a little worried about is if the projector is in the cabinet any movement while playing would cause the screen to move.

here is a picture of the projector - its a bad pic but it gets the point across.. thats about a 110inch display. Gaming on a projector really is fun, I have done it a few times after work with one of their projectors and a ps2

smack323 wrote: something I am a little worried about is if the projector is in the cabinet any movement while playing would cause the screen to move.

That was my concern when you wanted an all in one setup. Wonder if you could fabricate a pedestal that detaches and would sit a foot or so in front of the box. I'm thinking of something like mounting the projector to some kind of tube. The tube would slide into a slightly larger tube. You could drill a hole through the whole thing and just shove a bolt of something in there for stability. To remove the projector just pull the pin and slide it out. Then have some kind of base that it slides into. Or maybe even a camera tripod that you could mount to for stability.

My box is a full size cabinet and I put it on casters. 2 of the 4 are locking but you can't reach them by the way I designed it (doh!). Fortunately the cabinet is heavy enough that it doesn't wiggle when gaming on it.
I would never die for my beliefs because I might be wrong.
~Bertrand Russell
Top

What about putting wheels on just one end? Put a handle on the opposite end. Would make it easier to cart around, and should be relatively stable when using.
I would never die for my beliefs because I might be wrong.
~Bertrand Russell
Top

Since we have been discussing MAME. MAME on my phone. I upgraded to a Sprint Mogul earlier this year. It runs Windows Mobile 6. Anyway, I did this more for giggles than anything. Not sure if this violates any of the forum rules to post. Please slap me with a wet fish if I shouldn't. 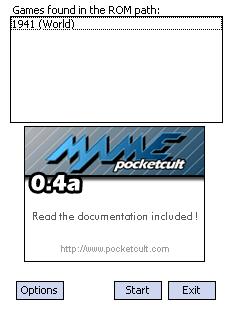 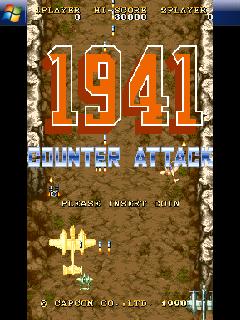 I would never die for my beliefs because I might be wrong.
~Bertrand Russell
Top

I think I have mobil 6 on my phone.. I going to have to give that a try- didnt even think of something like that for a phone.

the idea of wheels on one side is perfect- tilt and roll.. I love it.

So i ran into a bit of a snafu.. i went to put together all my hardware on sunday just to be sure everything is working. Well the case I salvaged from my brother wont work. so I am going to need to try to find another junk case.

i finally received the new mother board yesterday. I currently have win XP SP1 installed on the new rig, but i am getting system lock ups when I install SP2 and when i do some driver updates. I am going to try and connect to the net tonight and just do auto updates and see if that works better. I 'll be posting pic later.
Core i5-6500 - Corsair Vengence 16GB DDR4 2133 - Asus GTX 1070 DUAL 8GB - Antec 750W - Crucial 525GB SSD - Windows 10 64bit - ASUS 27" LED
Top

SP2 was finally installed- it took 4 or 5 attempts to install with out the whole system freezing up. I am now having problems connecting wireless to the internet. I can connect to my router but the machine is not being assigned an IP address. I am going to just manualy set one tonight and see if that works... here are pics of the guts.. notice i didnt take my own advice to Vicaphit and use a mat to avoid static shocks, I forgot to bring one home Friday and didnt want to wait. these are mostly all used parts so it wasnt a huge concern. Wood doesn't really conduct electricity, so I think you can get away without using a static mat. Good luck with the case.

I hope the projector you got from Ebay has a bright bulb. I have a friend who got a projector from where he works for cheap, and the bulb was nearly dead. $500 later he had a cheap projector and an expensive bulb.
----
Andy

the bulb is really bright- and has under 300hrs on it. so thats good. I am pretty happy with the projector. i actully bought 2 and kept the one that looked best.. i resold the other one back on ebay for a $50 profit..

I still cant figure out why i keep locking up.. its a complete lock-up mouse, keyboard, everything. I changed the RAM with a known good stick- still locked up.. checked CPU temps buy running a stress test for about an hour- those were good and the CPU didnt have any problems. i think i am just going to try another motherboard. UHG.. I still cant connect to the internet either via wirless though- going to work on getting the system stable before i worry about that..
on a good note my x-arcade controller came yesterday its nice..

Sweet! I liked some of the X-Arcade stuff that I saw. I actually considered getting one of their setups, but made my own.

I can't seem to find a completed pic of my setup, but here is my control top from when it was in progress. I totally goofed and mounted the joysticks with the lip over over the top of the panel. I should have drilled holes and mounted underneath. I also botched the roller ball location - notice how close to the TV it is. Makes for an interesting golden tee experience.

You can also see where I messed up the plexi-glass on the right stick. I had already messed up one piece of plexi and just said efff it. On the finished product there is red trim that wraps the outside edge (same as the vertical edges in pic).

The sticks I used are 8-way. I also put a coin button next to each player button. I plan to completely redo the control top though. When I've got buddies over drinking they always want the golden tee, and (as I stated above) it's a royal pain. For any non-rollerball games the setup is perfect.

On the new design I want to incorporate something to hold a beer on either side. Thinking of holes on each side with pool pockets mounted underneath. 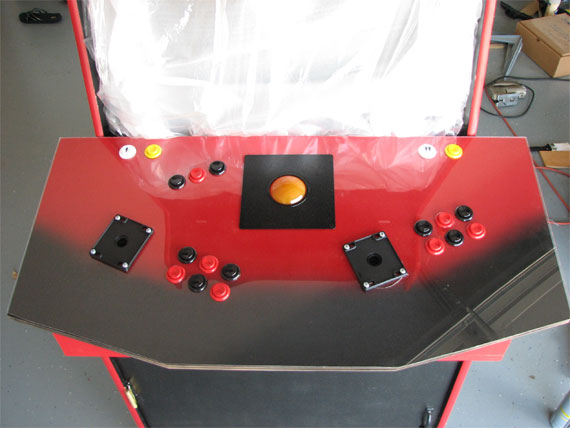 Last edited by Sporg on Thu May 22, 2008 9:15 pm, edited 1 time in total.
I would never die for my beliefs because I might be wrong.
~Bertrand Russell
Top
Post Reply
91 posts