Want to show off that smoking system or your latest creation?
Post Reply
96 posts

Skippman wrote:Speaking of dremels. I'm going to have to cut the support brace off the back of the NZXT's mouting bracket in order to make the water cooling tubes fit without kinking them. Sucks, but you gotta do what you gotta do. Take that manufacturers warrenty!

Seriously, did you try just taking the fan controller to bits and reassembling the support bar upside down?

Well I tried Dan's recommendation today and inverted the mouting bracket for the Sentry. 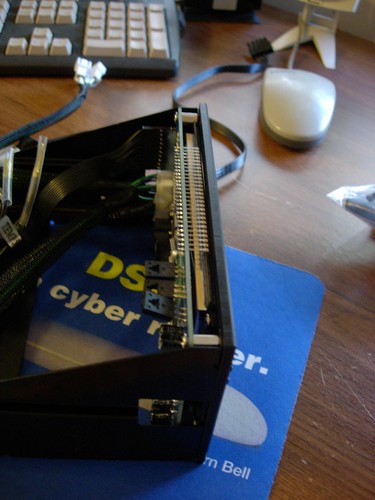 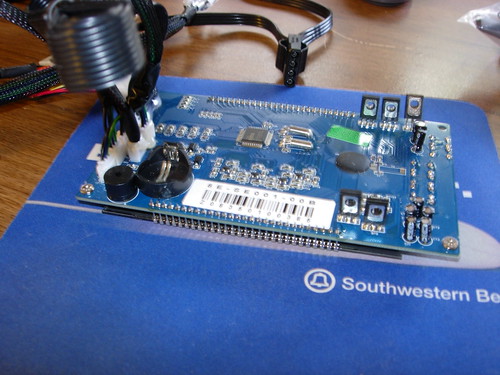 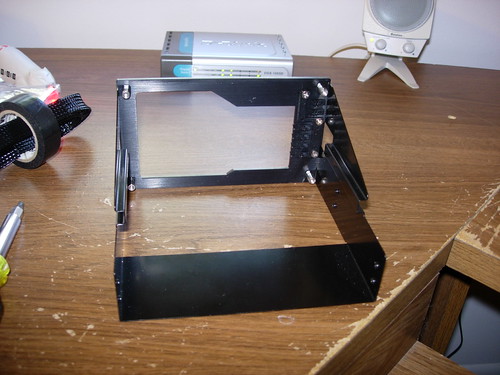 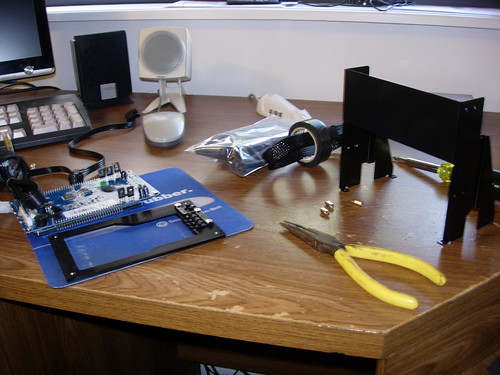 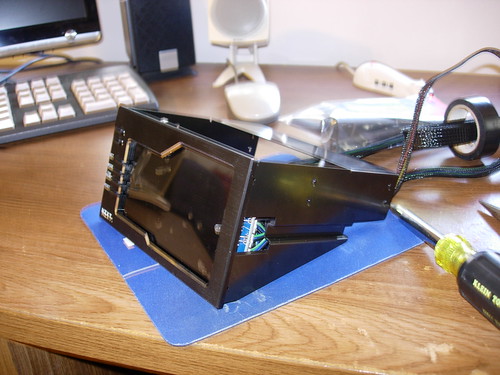 The only problem is now the screw holes don't line up 100%. The bracket holds the screen just about an 1/16" of an inch to far back. I might end up making the holes in the case slightly larger to allow for some play. I've tried to take a picture like 5 times to show you guys but I just can't get the flash and focus right one handed. Sorry.
Top

did those voltregs really not come with heatsinks?

Aww man, so close, but yet so far.

The rest of the build is looking great though

Not sure what you're talking about.
Top 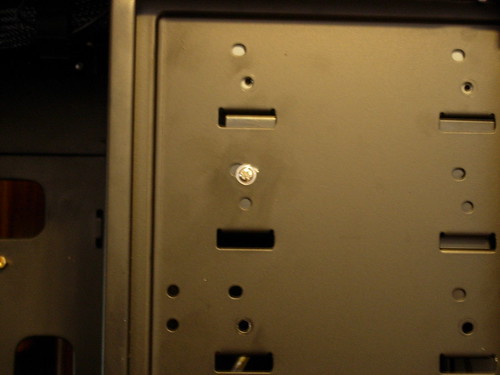 Using a roto zip I was able to route out the hole enough to make the screw fit. That make you happy Dan-O?

Notice the front screw hole isn't lined up? It's next!
Top 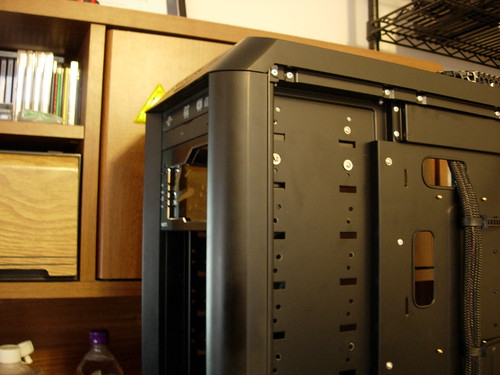 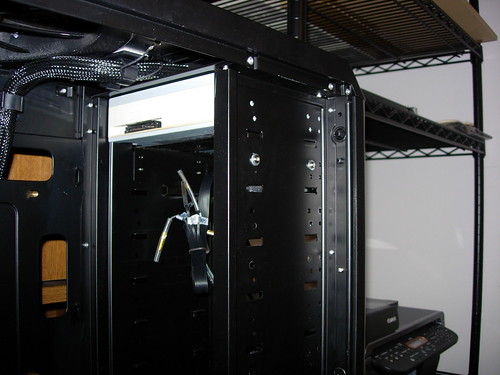 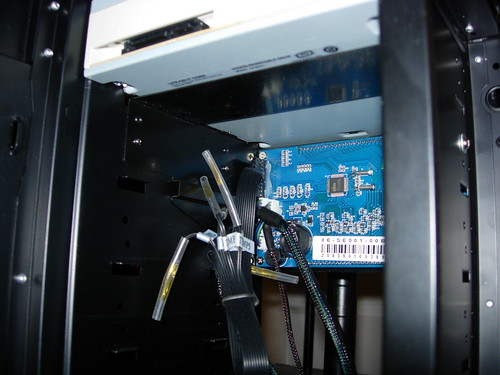 Thanks for the motivation Dan! I was getting discouraged until I manned up and just chopped the heck out of the case. I used some washers to help mask the huge holes that are there now and to shore up the screws better. Next up, the radiator install. Should be much easier now that the brace for the Sentry is on TOP.
Top

Glad you are back on track with the build :D

Looking good. I like the black paint on the inside of the case. I may have to tear mine apart in the Spring and do that. Good job making the case work for you.
I would never die for my beliefs because I might be wrong.
~Bertrand Russell
Top

Sporg wrote:Looking good. I like the black paint on the inside of the case. I may have to tear mine apart in the Spring and do that. Good job making the case work for you.

Finally mounted the radiator. Might have to make the holes just a bit larger and scoot it in another 1/16 of an inch as right now I'm not sure I can mount the front fans as there is ZERO room between the fan enclosures and the radiator (which is what I wanted). The brackets are mounted using washers on both sides with a lock washer and nutt on the outside of the drive rack. It is SOLID! 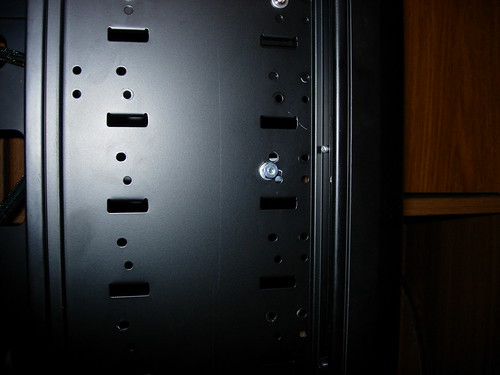 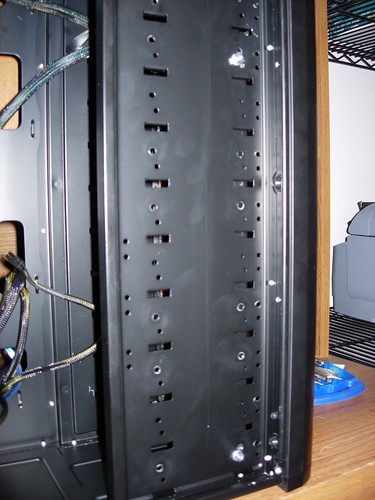 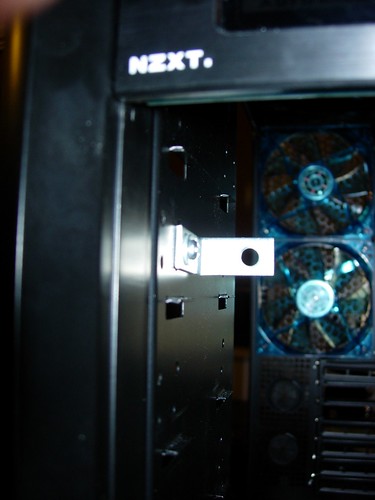 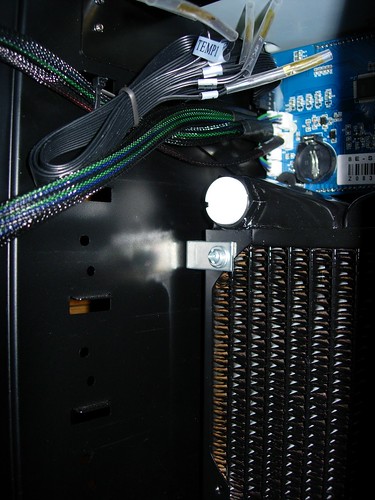 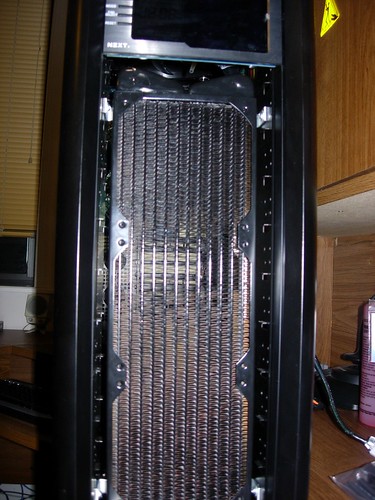 Well since other people are getting thier Antec 1200 water cool systems up and running it lit a fire under me to get back to work on mine. I'd taken time off from it due to work and getting my new Jeep. I took the day off for my birthday and did a little more work on it. I had to route out the mouting holes for the radiator brackets to have enough room to put the front fans back in. As you can see here, there is ZERO space between the fan moutings and the radiator to keep air flow to a maximum. 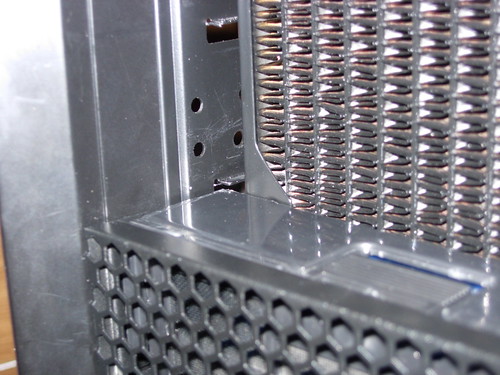 I powered it up to make sure all the fans had enough clearance and to see how she'd look. Here's two pics, one with flash and one without. They're both kinda blury. Sorry. 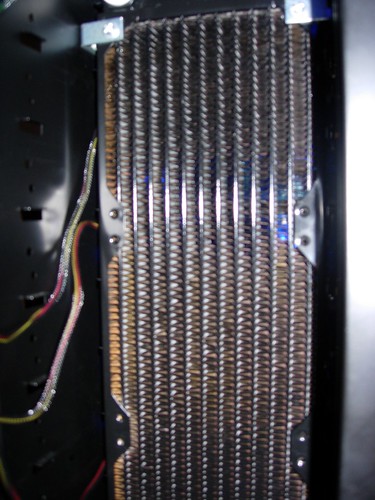 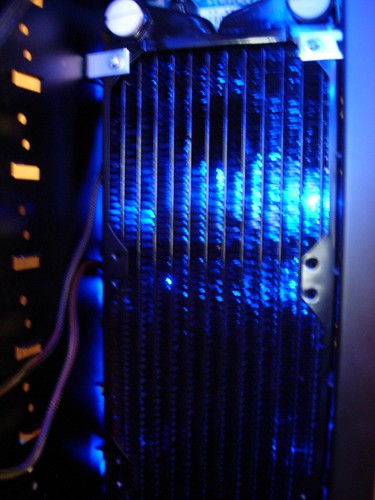 Well, I aint making the mouting holes bigger still so this will have to do. :D

And it seems plenty quiet enough when turned on.
Top

Well, Warmahines now online WITH A HUGE THANKS TO BIOHAZZARD!

I drove down to his place in the back woods of Missouri and I'm glad I did due to a few technical glitches we ran into, namely the mounting screw for the CPU waterblock was milled wrong and wouldn't attach to the back plate. 3 of them screwed down tight but the 4th refused to bite. Fortunatly Bio had a whole slew of spare parts including the mounting hardware for an older Apogee GTX that fit perfectly. Now, on to the pics!

First I started by mounting the hard drives. Unfortunatly I couldn't fit the fan shroud on with the hard drives in place due to some flanges in the front of the HD brackets. I had to mount the HD's first in order to get the hard drive "sled" to fit in the case as it wouldn't after the PSU was installed due to flanges/tracks in the drive bays. 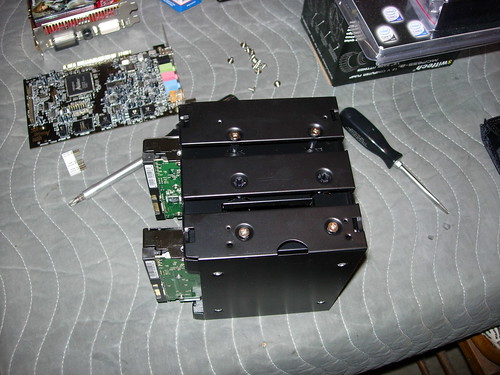 One that was done I installed the PSU and began running the wiring. It's not as clean as I'd have liked due to the small opening left after backspacing the hard drive sled but it's not air restrictive so it should be fine. 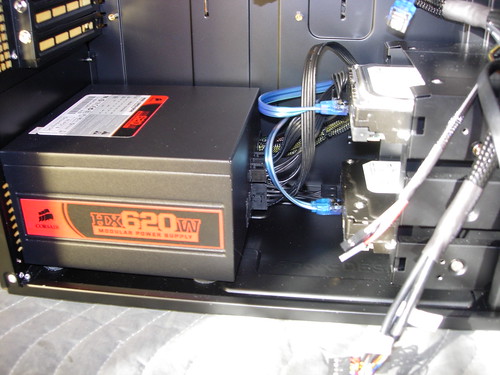 Next up was the motherboard mounting. I was concerned for a second that the board would hit the hard drive sled but fortunatly there was enough gap that everything worked out. There were no closer holes for the USB and motherboard HD Audio connectors so the braided cable was brought right through the middle. The braiding at least gives it a finished look. 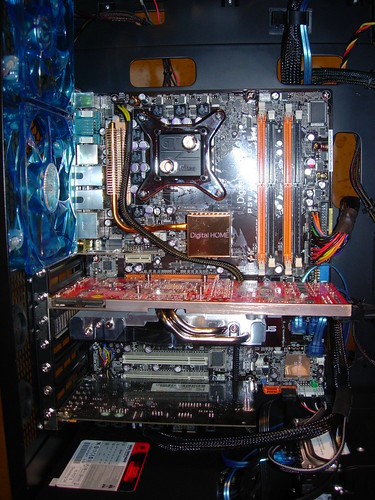 Next up was plumbing the loop. I had originally planned to use the metal hose clamps I bought from Performance PCS but Bio talked me into using the plastic clamps and they've held just fine. I don't have step by step pictures of the loop as I was pretty excited by this point but here's the up close photo's. 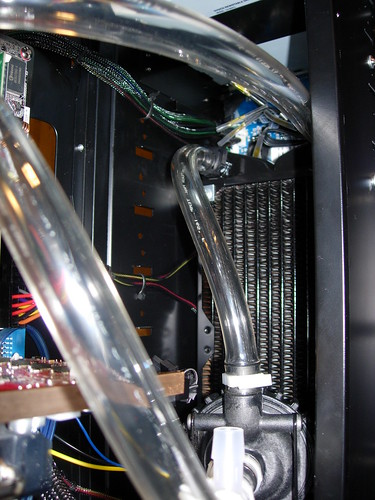 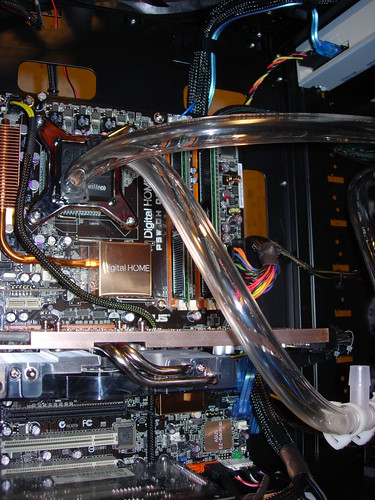 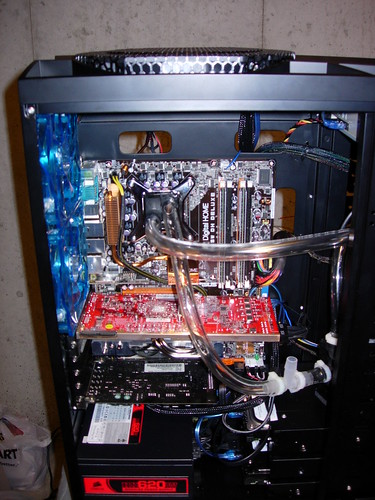 Last up was to add the fill port and fill the loop. I ended up rubberbanding the T-Line to the loop. I plan to eventually replace the white rubberband with a black one. 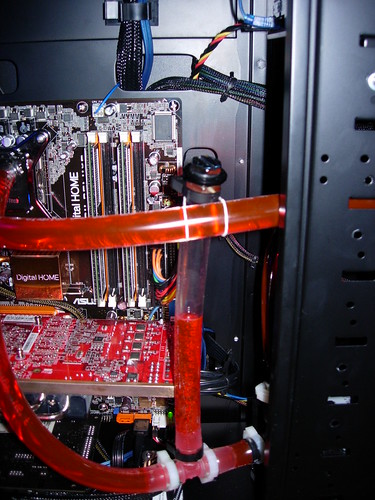 And heres a shot of the full loop. 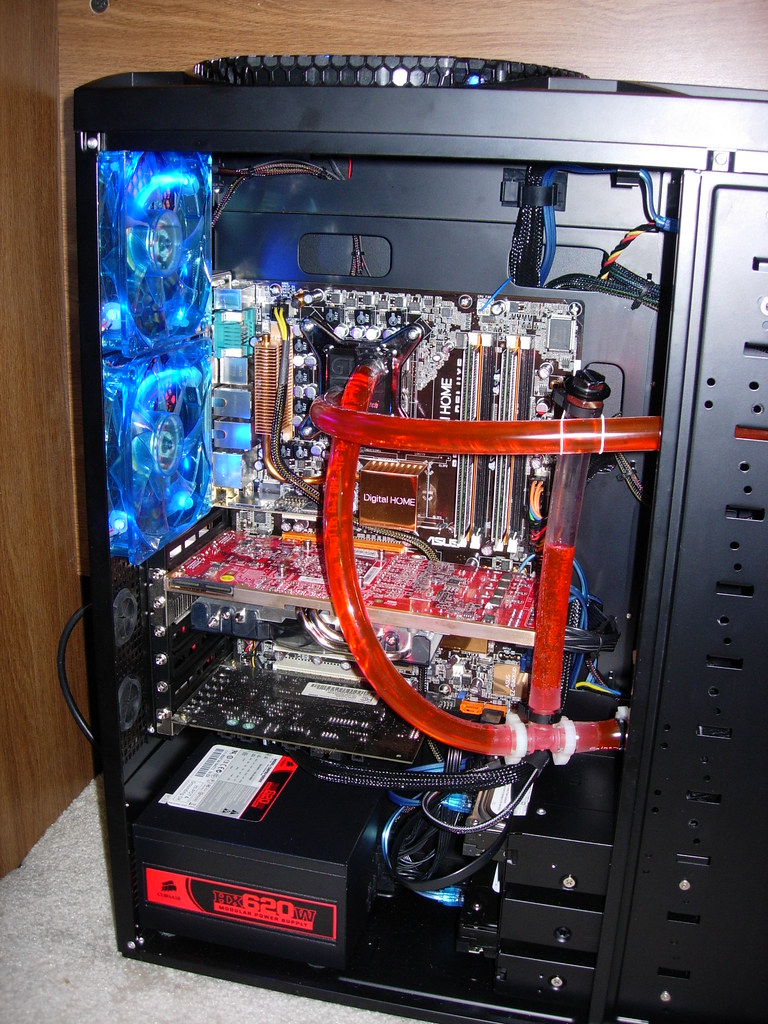 That's it! She's done for now with the exception of adding the CCT's at some point. Thanks go out to Dan and Martian for ideas and Bio for helping with the actual build and being an all around cool guy.
Top

Now then, I need someone to make me a new banner.

yeah, the finall product looks great! my rig is getting jealous and says ive not been throwing enough money into it

Dan:3Martin:3 "my manhood is so big if i put it on the keyboard it would stretch from A to Z!"-Anonymous
Top
Post Reply
96 posts