by stopthekilling77
Well, my WC loop has been running strong for quite some time now, but my motherboard's RAM slots went bad. In the process of replacing the defective motherboard, I pulled out (very carefully) the old board, connected everything up to the new one, and put it back into the case. Mid-way through testing the RAM, I saw the PC freeze up. Upon closer inspection, I saw that the tube bringing fresh liquid into the CPU block has pulled back JUUUUST under the clamp. Its not off of where its supposed to be by much, and it seems like I may be able to just push it back down and re-clamp.

I've pulled all the components out and put a bowl under the CPU block to make sure if it DOES leak that its controlled. I've used contact cleaner on the parts that got moisture on them. I'm going to attempt to undo the clamp, push it all the way back in, and re-clamping - all without draining the loop.

Thoughts, concerns? I'm doing all this at the PC repair shop I work at, so I'm not really sweating bullets, but if there's anything you might recommend doing, I'm all ears.

by bubba
So it only started leaking after you pulled it from the case?

With tubing, the cheaper brands anyway, will "relax" over time. I found this out the hard way with some Home Depot tube. It got warm, relaxed and twisted on itself with the system on the test bench. The twisting choked flow, system heated up and thermaled and shut down. The tube then firmed back up and locked in the twisted state. When I took it all apart I noticed the clamps where not tight, snug but not tight.

Switched over to Masterkleer haven't had an issue like it since, but I also now run 7/16"ID tube on 1/2" barbs, no clamps, just zip ties.

by stopthekilling77
Yeah, no issues at all until the day I switch out the mobo. Upon closer inspection, I realized that the tube wasn't cut very clean to begin with. It was kind of jagged and not a flush, smooth cut so it may have been "off" even when I set it up originally. I decided to just drain the loop. I'm going to clean all my components and then re-do my loop because as I kept working on the loop, it sprang another leak from a barb that twisted loose on the GPU block. I can take a hint from my PC and give it some TLC. I'm just hoping that the 9800GX2 still works. Couldn't care less about the mobo though, it was bought used for like $40.

Any tips to get the tubing cut properly? I just remember it being too tough to cut cleanly with scissors. 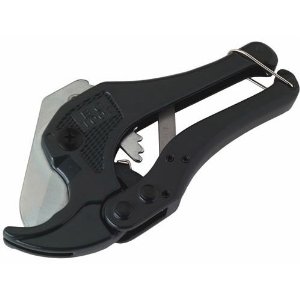 Think I got mine at Lowes for ~$12, best money I've spent on tools in a while. Cuts PVC pipe and just about any hose (that isn't metal re-enforced)

but shows how it works. Nice square cuts.

bubba wrote:Head to the hardware store and pick up a "PVC Pipe Cutter"
Think I got mine at Lowes for ~$12, best money I've spent on tools in a while. Cuts PVC pipe and just about any hose (that isn't metal re-enforced)

but shows how it works. Nice square cuts.

that is something i think we need here, we just cut PVC with a sawsall or porta-band haha nottt very clean..

by bubba
The cutter in the pic is what I have and it can do up to 2" sch40 pipe, cuts like butter.
All times are UTC-06:00
Page 1 of 1
Powered by phpBB® Forum Software © phpBB Limited
https://www.phpbb.com/