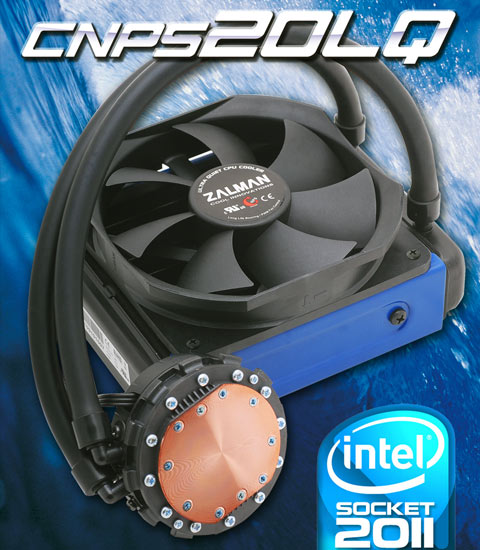 It appears that Zalman is entering the water cooling market! It like Zalman and Asetek have partnered up and that the first product from the partnership is called the Zalman CNPS20LQ. The Zalman CNPS20LQ is a self-contained sealed CPU cooler that looks very similar to the Corsair Hydro H70, Antec KÜHLER H₂O 620 and the Intel BXRTS2011LC. The CNPS20LQ uses a single-fan (dual-fan capable) radiator design. Its radiator measures 120 (W) x 158 (L) x 25 (H) mm, which fits standard 120mm fan locations. The water block houses a pump, which draws power from standard 4-pin CPU power header, and according to the specifications it does support PWM control. The base of the water block is made from copper and comes with thermal interface material pre-applied. The CNPS20LQ supports all current socket types, including Intel LGA2011, LGA1155/1156, LGA1366, LGA775; AMD AM3+, FM1, and AM3/AM2+/AM2. The rumored price is supposed to be $90, which is right around €70 before VAT.

Asetek must REALLY be loving life at this point
-Austin

That would go nicely in my hackintosh