Forum for all the nVidia video cards from the past, present and future!
Post Reply
6 posts • Page 1 of 1

I've now been waiting for over 2 months on Dell to ship my 8800GT's and it's given me too much time to think about this crap. I was settled on running the 8800GT's on a 790i board using a Q9450 processor (going on the early reports they would both be available in Jan). Now the 8800GT's I ordered seem like they'll never ship and both Nvidia and Intel have pushed the dates out on the MB and CPU I wanted to buy this month to sometime late Feb or even March (from the info I can find online). I'm getting tired of waiting. 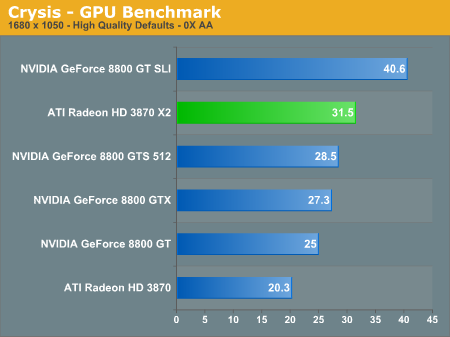 Help me make up my mind...I need all the help I can get at this point. It's been 3 years since I've built my last rig, and all this research has me pulling my hair out.

Damn you Nvidia and Intel......you should have released your products in January like you were supposed to!

I would get a single G92 GTS because not every game works well with SLI. Some you will have better performance, some about the same as a single GT and some worse. You'll also be obligated to always have an Nvidia chipset mobo as long as you have SLI. Plus a single GTS would be cheaper.
Top

If your waiting on Dell you need to check your status, they canceled a LR members order without telling him. I'd go with a single GPU solution, unless your gaming at uber resolutions, and willing to put up with the headaches of dual card solutions it's just not worth it. By the time they get SLI/Crossfire drivers fixed, and enough games supporting it the GPU will be out dated leaving you with expensive video cards and frustration. I'm with Geokiller on this one grab a 8800 gt and down the line the new GPU. As for Crysis it's probably not the video cards lacking, it's the coding of the game don't use that as a standard. Depending on the support for it the new 3870 X2 dual GPU on one card one connector at the projected $400 price point might put a smile on your face, it's running as good as the 8800 ultra that is much more expensive.

Even with SLI note that the 40 FPS is an average so gameplay still won't be as great as you want due to stuttering from time to time. There are a few settings that you can drop down that really don't impact the visuals greatly and make a big difference in framerates. I forget what they are but I believe there is a good guide at tweakguides.com
Joe
Top

I don't know where you live but there are some retailers that have a 8800GT 512MB for under $200 (when on sale along with a MIR).
There is no theory of evolution. Just a list of animals Chuck Norris allows to live.
Top
Post Reply
6 posts • Page 1 of 1