again this is rumored (if you couldn't tell) but Heise.de has a pretty good track record of releasing actual specifications still under NDA, so i expect these specifications to be very accurate given the expected release date


EDIT: looks like Heise.de was right on the money yet again!

very interesting specs, but a GTX 460 for ~$189 is still hard to beat due to how well it can OC. Guess time will tell though.

by djpinc19
I'd like to see the stock GTS450 beat all stock variants of the GTX260. Beating the superclocked editions is a bonus. Since the release of the 460, things are looking better for Nvidia.

Very nice price, and considering it's only 8.5 inches and requires one 6 pin connector, I'm impressed. I hope it overclocks as far as GTX 460 does

by skier
Nice heads up! 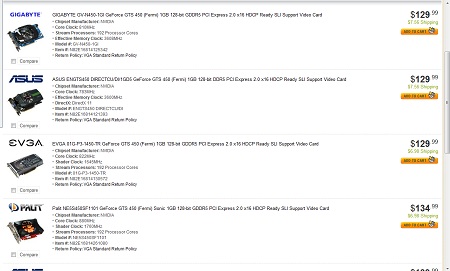