by Kaos Kid
My daughter has a HP Pavilion 17-e019dx laptop that we can get a few more years out of with some upgrades. I am looking at 500GB SSDs to replace the 750GB 5400rpm mechanical drive, and getting another 4GB memory module to upgrade the memory to 8GB. The wifi card it came with sucks, it is a single-band 2.4Ghz RTL8188ee card b/g/n with a limit of 72mbps (standing right next to my AC router I could only get a max of 52mbps so yeah it sucks). When I opened the laptop back to look, I found two wires (antennas?) connected to it, a white one and a black one. Wouldn't that indicate that although it has a stock single band card that it could work with a dual-band card? I don't know if HP has a whitelist for this laptop or not, but I'm hoping that I can upgrade it to a combo dual-band wifi/bluetooth card. What do you think?


This appears to be on the list for HP17 series laptops per the servicing guide, single band N but rated at 300mbps and Bluetooth:

EDIT:
I deleted all the links for the other cards due to further research showing that their PCB mounting holes are different. I did find a review that Nate did in 2014 that included the above card (7260HMW-BN single band), the 7260-AN (Dual-band wireless N with BT) and the 7260HMW dual band AC with Bluetooth, though his review was done using an Intel NUC rather than a proprietary HP laptop.


Perhaps if Nate still has any of these cards he would let me test it in my daughter's laptop so I can know if it works before I buy one...

Laptops are a pain to upgrade certain parts. I guess it has something to do with the motherboards and connectors but I have no idea. I went with a USB dongle for my Dell Studio XPS 1645 (or 1654 dunno one of those numbers I am too lazy to look right now lol) when the wifi went out. Then the only limitation is the slow USB 2.0 connectors. I really need to get a new one but it is still working and money is tight so it gets parts and pieces for now

by Kaos Kid
The 7260BN card looks to be the best of the supported internal ones, but as with the others is only single band. To use USB it would have to be one of the little button type adapters (like for a wireless mouse) and would need to have both dual band wifi and Bluetooth to be optimal. She doesn't want a big USB adapter sticking out of the side of the laptop and have to deal with it everytime she packs up to move on to the next class. The wifi card appears very easy to access and replace on this laptop, I just want to get the best that will work, not just the best that HP will certify on their whitelist. I don't even know if there is a whitelist on this bios, seems to me if there isn't then any card with two antenna leads would word which is why I'm trying to get both AC and BT in an internal mini-card. 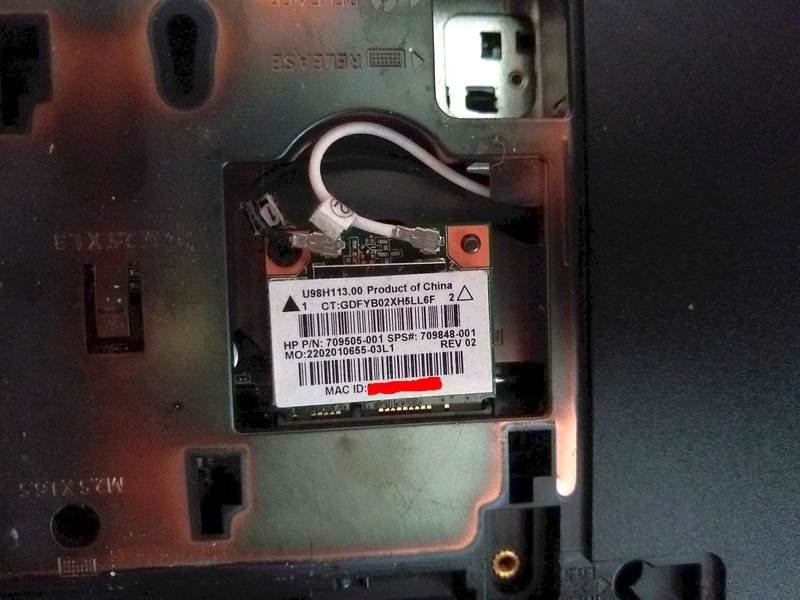 by bubba
A lot of those older laptops were bios locked to a certain type of WiFi cards. I have a few Lenovo's that I have to run a mini USB dongle for their WiFi

bubba wrote: ↑
Mon Mar 25, 2019 6:16 am
A lot of those older laptops were bios locked to a certain type of WiFi cards. I have a few Lenovo's that I have to run a mini USB dongle for their WiFi

Plus 5ghz doesnt have a huge range so will it even work for her in classes? 2.4ghz works a lot better at long ranges and N does 450mbps (max) so it should be plenty fast enough.

I decided to take a chance on the dual band wireless card AC7250 HMW (part referenced as 784650-005), the top card on Nate's test list in that particular review. I guess we got lucky that HP didn't have a whitelist on this Pavilion 17 Lappie, either that or perhaps just because it was from the same family (chipset?) as the less-featured but supported N card it allowed it. Either way it works. It took windows 8.1 roughly 10 minutes or so to come up with the driver, but it did recognize the device and eventually load the driver. The bluetooth works too, so for $12 I got to upgrade her from a basically G speed card to an AC card with Bluetooth. The memory card upgrade was $15 and got her from 4GB to 8GB. I have a Crucial MX500 1TB SSD on the way and will clone over her old 750GB 5400 platter so this lappie will be like a new one for around $150. Its i3-4000M CPU still beats the newest entry level lappies in benchmark tests, so I am expecting this laptop to scream when I'm done. I've also found an i7-4702MQ Quad for sale on ebay for only $70 so I just may hit that one too. Only downfall would be not having the newest laptop graphics, and of course battery life is less but otherwise new (and vastly improved) life to a five year old laptop.

by KnightRid
That is great news! (HAH Futurama flashback)

Does the i7 have a motherboard that will fit that laptop? Have to make sure all the parts and pieces line up.

by Kaos Kid
The i7-4702MQ is the fastest on the compatibility list for the HP 17-e019dx laptop so I looked it up on ebay and found that one listed. I'm going to wait and see how it runs after the new SSD goes in to decide whether it needs one more upgrade. I know it's old, but nothing newer for under $600 or so impresses me, I'll squeeze this dime until it turns into a quarter lol

She took it to school today at SCC and said that it had no problems with the wifi since it connected with the existing credentials (which would have been on the 2.4Ghz band), so I'm thinking the college has their main wifi as 2.4Ghz I agree that 5Ghz would probably not be feasible to blanket the whole campus.

Most clone programs should be able to let you resize the main partition if needed. I know I did it with all my clones from small drives and never had to worry about a separate piece.

by Kaos Kid
I cloned the drive over. I had previously created a partitioned primary drive (Drive letter E) for her to store media separately from the O/S partition/primary drive (Drive letter C, with Drive letter D being an optical drive) which interfered with using the over-provisioning tool included with Crucial Storage Executive, CSE cried about not having enough space on the last partition so when I cloned it 1:1 there was a couple of hundred GBs of free unallocated space which I merged with the aforementioned media partition except for leaving 10% of the drive as unallocated at the end of the SSD. Working good so far, it better since it went from SATA2 5400rpm to SATA3 SSD. It honestly is much better with these simple upgrades than when brand new.

Note: I was not real happy with the packaging of the SSD. Although the ebay seller listed it as new I suspect it was an OEM drive, but not sure how to tell in the drive nomenclature, so I'm unsure if it is eligible for the full warranty period or not. The drive arrived in no packaging or box whatsoever except for a small tiny bubble wrap sleeve which in turn was in a slightly bigger then bubble wrap envelope. I would have thought that it would have came in at least a white box for protection during shipping. Trying to decide if I want to give the seller five starts or deduct one for packaging even though it appeared to be undamaged.