An Ongoing Saga with Logitech Harmony One

A place to talk about A/V receivers, Blu-Ray players, LCD or Plasma TV mounting, audio tips or anything else that you think fits.
Post Reply
4 posts • Page 1 of 1

An Ongoing Saga with Logitech Harmony One

First off let me say I bought a Logitech Harmony One refurbished in February of last year. Think of it as my birthday present to myself.

So the Saga starts here now that you have the background.

Apparently in the last year a software update occurred and the remote wouldn't connect to the Logitech servers on my new computer (hadn't tried to update it in the last year because it just worked, only now because I got some new equipment).
The server throws an error saying the following "The product has previously been identified as defective and replaced."

My first thought is no ****, this was refurbished. The next part of the message however concerned me. It states this "It has been disabled and therefore you will not be able to continue setting up this device."

I had set this up before when I first got it and it was still working great...So I unplugged it and sent in a support ticket with my Order Number, S/N and PID etc. No response after a few days. So I called today.

The phone call started off asking for my username, I didn't know my username, because I didn't remember making one to set it up a year ago. I gave him my e-mail address it seemed to work. I explained the problem and that I'd read it being somewhat common. He didn't' believe me as he asked for the order number and other things which I had and was already in their system as a ticket, he could have read the ticket. After being on hold for 15min he come back and says basically "you do own this and it is valid. We are going to escalate this request to the tier 2 support group."

So this is where we are today with the saga. I look forward to them fixing it and have read some forums seeing people having resolved it this way. I think once they have had a few people report this they should have addressed all of them. Instead it appears they have done nothing to address this as some people gave up and bought new ones. These are expensive especially if not refurbished. I hope to hear back soon and be able to program it to run my media center's new remote reciever and the new cable card. I'm planning on programming some keyboard keystrokes into it too so it will be easier to launch media center and execute a few mods. If anyone else has a refurbished one hopefully I can warn you if you haven't tried to update it in the last year or so. I will report back when/if it gets resolved. /end rant 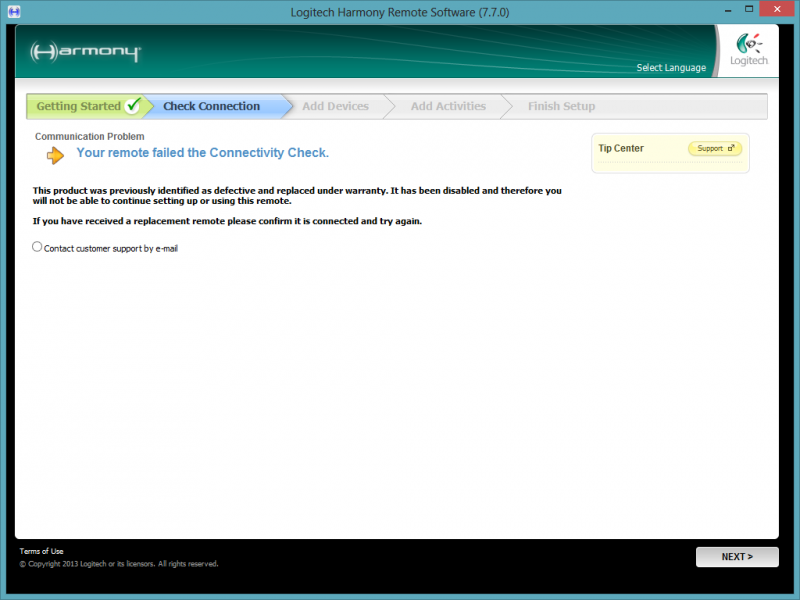 Picture of the Connectivity Check Error

Hope they get that fixed for you. Crazy the error you got was over the replacement of that remote!
Find us on Facebook to discover the faces behind the names!
Follow Me on Twitter!
Top

I love my Harmony - dont have the expensive ones though ;)

Elevated to tier 2 sounds great! Hope it gets fixed.

I received a call today at work telling me it has been reactivated with my account so I will try to update it when I get home and report back. If it does work at least it can be a path forward for those who have purchased them refurbished and run into this problem. These remotes are definitely worth it when you can get them for $100 refurbished.