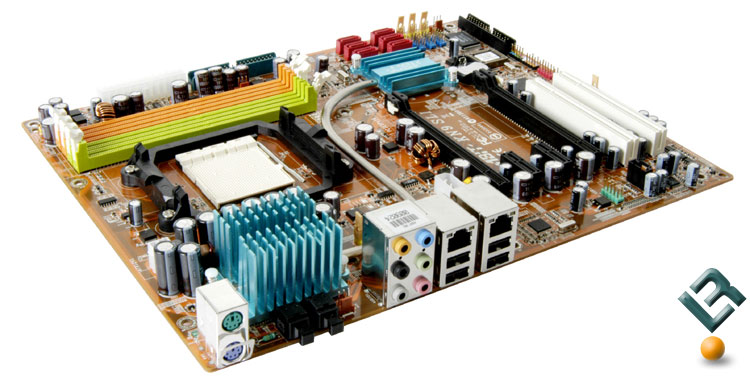 The KN9 SLI motherboard is a standard ATX board and has support for socket AM2, DDR2 memory, six SATA II ports, ten USB 2.0 ports and dual SLI, along with ABIT's Silent OTES cooling system. It's based on NVIDIA's MCP55 single-chip solution.

is abit back in the game with AM2? hopfully. Seems to me, everything they put out for 939 has been trash
Top

Two PCI slots is all I need. Similar implication of the heatpipes like their AN8 32X. Nice stuff.
There is no theory of evolution. Just a list of animals Chuck Norris allows to live.
Top

Just curious, but why do you guys need more than two PCI slots? I use 0 on my personal system.
Top

I use only two, one for a NIC and sound card.
There is no theory of evolution. Just a list of animals Chuck Norris allows to live.
Top

Looks like a sweet board! Can't wait to see how it performs!
Top

I just hope they can put out a conroe board that can challenge ASUS. I hate asus because of the debaucle I had with there Xeon board, but they have a cheap 945 board

Apoptosis wrote:Just curious, but why do you guys need more than two PCI slots? I use 0 on my personal system.

TV Tuner (have an antenna, only the Hauppauge has proven worthy of the ability to tune plus my NLE machine cannot function with an AIW card).

EvilCloudStrife wrote:is abit back in the game with AM2? hopfully. Seems to me, everything they put out for 939 has been trash

Wouldn't agree. I own KN8 SLI and it's a rather ice board with heatpipe cooling. The KN9 SLI looks almost identical except they even fixed some layout issues. PCI molex is moved from the bottom to above the first PCIE connector, four-pin PSU connector has been moved to the upper edge and the floppy connector is still at bottom but moved to the edge of the board.
Also, the board also got the only really missing feature (ok, uGuru wouldn't hurt also) of the KN8 SLI - HD Audio support. ALC850 on KN8 SLI proved awful on my first try with America's Army and teamspeak.

BTW, in most reviews they found the floppy connector position a minus. I actually prefer it since I can fold the cable so it is routed to the bottom of the case right up until it gets below the floppy. It can be a problem if you have a floppy in the upper half of the case, though.

Now I bought Asus M2N SLI. After ordering it, found out that one local store received KN9 SLIs. Damn, I prefer Abit since NF-7S. I also read there are numerous memory problems with the Asus board although it does seem to overclock like crazy. Still, if I get any problems, it goes back and I'm getting myself the Abit one. Actually I hope something goes wrong ;)

P.S. the Asus board also features some ADI audio codec instead of Realtek 882 or 883 HD standard ones. Currently it doesn't support EAX. I hope that doesn't mean 3d audio is not supported. I never use EAX anyway since in all games I tried it in, it skewed the sound somehow. America's Army sounded awful with EAX on Soundstorm and Creative Live. Perhaps if I got myself Audigy 2ZS, I might reconsider using it.
Top
Post Reply
11 posts • Page 1 of 1