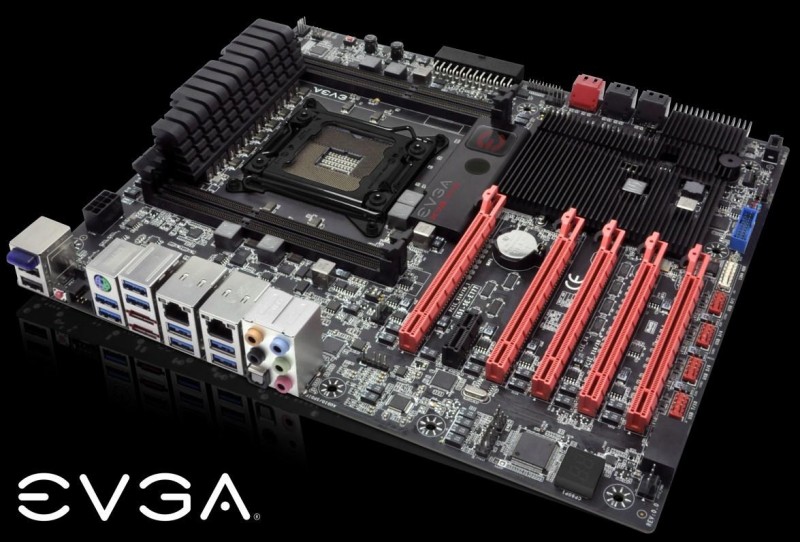 EVGA released a teaser picture of its X79 FTW motherboard. This is EVGA's third LGA2011 motherboard, after the E-ATX Super Record 3 and XL-ATX X79 Classified. This board confines itself to the dimensions of a standard ATX form-factor motherboard (240 x 300 mm). It targets the gamer-overclocker market. The LGA2011 socket is powered by a 14-phase VRM, while the memory, 4-phase. EVGA completely did away with cylindrical conductive polymer capacitors, and used a 100% POSCAP capacitor design. Power is drawn in from a 24-pin ATX (angled) connector, 8-pin EPS, and a 4-pin Molex (for PCIe slot electrical stability). There are just four DDR3 DIMM slots, one per memory channel.

Expansion slots include four PCI-Express 3.0 x16 (two are x16 capable, all four are x8 capable), a PCI-Express 2.0 x16 (electrical x8), and one PCIe x1. NVIDIA 4-way SLI and AMD CrossFireX are supported. The only internal SATA ports on this board are the ones the X79 PCH gives out, two SATA 6 Gb/s and four SATA 3 Gb/s. There are two eSATA ports, driven by a third-party controller. There are as many as eight USB 3.0 ports on the rear-panel, and two via internal header. 8+2 channel HD audio, two GbE connections, a Bluetooth connection, and PCH-wired USB 2.0 ports (for keyboard/mouse) make for the rest of the standard connectors. There is an EVBot header on the rear-panel, that lets you connect to the EVBot monitoring/control module. The UEFI BIOS is stored in two separate EEPROMs, and a 2-way switch lets you manually switch between the two. Expect the X79 FTW to be a part of the company's first wave of LGA2011 motherboards.