Discussion about Intel CPUs and overclocking. Need help with that new Intel processor? Not sure which one is right for you? Like to void your warranty? This is the place for you! Please keep the topic on Intel Processors!
Post Reply
9 posts • Page 1 of 1

Intel announced the second wave of Atom processors at Computex 2008 – one CPU for Netbooks and one for Nettops during a keynote this morning. (During his keynote speech Intel's Sean Maloney said that Netbooks are compact mobile devices that children, first-time Internet users and people who desire an extra PC can use for basic computing applications, listening to music, e-mailing and surfing the Internet. They can also be used for playing basic online games, social networking and making voice over IP phone calls.) Both of the new processors are based on the Diamondville single-core, a slightly modified version of the original Silverthorne chip and are aimed at mobile Internet devices (MIDs). The Intel Atom N270 and 230 processors both run at 1.6GHz, with 512KB of L2 cache and a 533MHz front side bus in a 22mm2 package. The difference is that the N270 is intended for laptops such as the MSI Wind and the upcoming Eee PC update. The N270 supports Intel's Enhanced SpeedStep Technology, with the a deeper C4 sleep state than what the Intel Atom 230 is capable of. The Intel Atom N270 has a 2.5W TDP, rather than the 2W of the Z5-series. The Intel Atom 230 is for desktops (Nettops), and has a slightly higher TDP of 4W. The original Silverthorne based processors used Intel 915 Express based SCH chipset, but with the new Atoms announced today Intel has paired the 230 and N270 with the Intel 945 Express chipset (945GC for Nettops and 945GSE for Netbooks) since the features of the chipset better fit the demands for the devices they will be used in. We had a chance to talk to Intel's Erik Reid and he informed Legit Reviews that pricing on netbooks using the N270 would range between $249-$349 and nettops using the 230 would be $199-$299.

Here are the specification slides that Intel provided Legit Reviews for each processor. 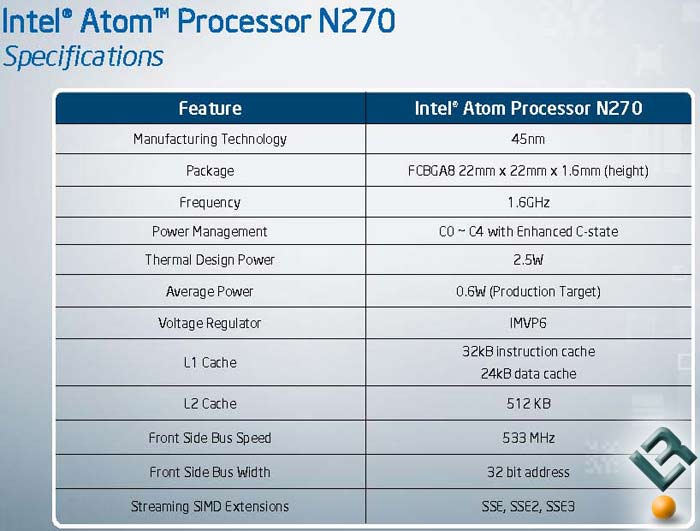 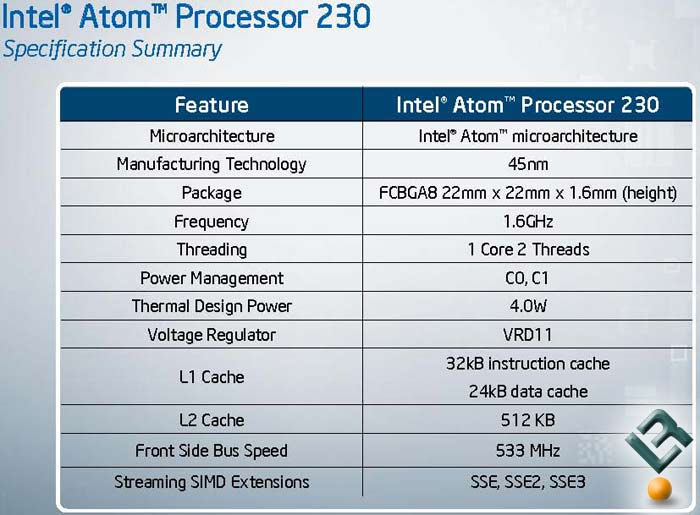 Bring on Nano/Nvidia and Nvidia Tegra!

I love hoping for Intel to get kicked in the nuts.

Bring on Nano/Nvidia and Nvidia Tegra!

I love hoping for Intel to get kicked in the nuts.

Anandtech have a (p)review out.
Top

HONkUS wrote: I love hoping for Intel to get kicked in the nuts.

Embrace the 'dark' side and get an Intel, my friend. Upgrade to even a mid-range Core 2 Duo and you'll never look back.

I just want to see how the Via Nano does against the Intel Atom... I think they have it for now because Intel announced dual-core Atoms are coming out that will be more powerful. That is all fine and dandy, but I still want battery life... Don't forget VIA and the Nano!
Top

Using the 945 chipset might not have been the best idea, it consumes more than the CPU... Also, from what I saw, Atom isn't so great, can't wait to see a comparison between this and VIA's Nano.

nVidia Tegra isn't x86 so it's not the same market.
Top

CoolZone wrote:These CPUs are nice but I read that they heat up a lot