Discussion about Intel CPUs and overclocking. Need help with that new Intel processor? Not sure which one is right for you? Like to void your warranty? This is the place for you! Please keep the topic on Intel Processors!
Post Reply
12 posts • Page 1 of 1

The crew over at VRZone were able to grab some Futuremark PCMark Vantage CPU Scores from an Intel Nehalem running 2.66GHz. 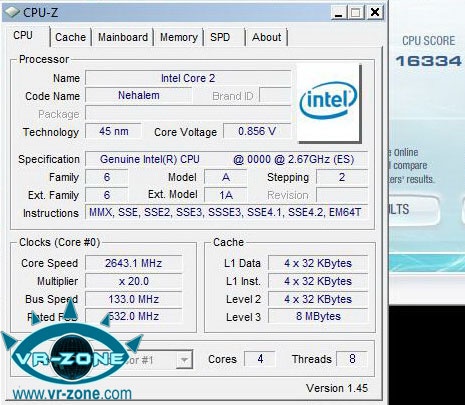 Another interesting hunt over at Computex is definitely the Intel Nehalem and we managed to get our hands on a 2.66GHz Bloomfield running on a X58 Tylersburg board. Its 3DMark Vantage CPU score is pretty remarkable at 16334 which is about 45% faster than a similarly clocked Yorkfield.

Either way you do the math -- Nehalem is looking impressive! That is simply amazing! The crew over at Anandtech did a bit of benchmarking on Nehalem and it came out fast.

Fast like Conroe vs. 486 fast. The battle between NVIDIA and Intel should be monumental. Sorry AMD, you have a long road to recovery.
Top

The Nehalem is looking sweeter with every news bit about it

There is no theory of evolution. Just a list of animals Chuck Norris allows to live.
Top

man, Waiting for the kinks in Nehalem to be worked out is going to be tough if the performance is as good as we are seeing.

so i guess intel is starting to continue to pack a ton of punch at lower frequencies, at this rate, AMD'll have to provide 4GHz Phenom variations just to keep up the PERFORMANCE though

I hope they are bragging about it, as if they are, it should put the rumour that they are locking down overclocking out of the window
*i just hope it's not insane overclocking on the XE's only*

Insanely sweet performance. Might have to look into one when the kinks get worked out.

Insane performance indeed, but until it comes down to my price range, there will be newer and faster technology out.