by Apoptosis
Was just playing around with an Intel 660 processor on the ASUS P5WD2 Premium and hit an impressive 4.5GHz with little effort at all! 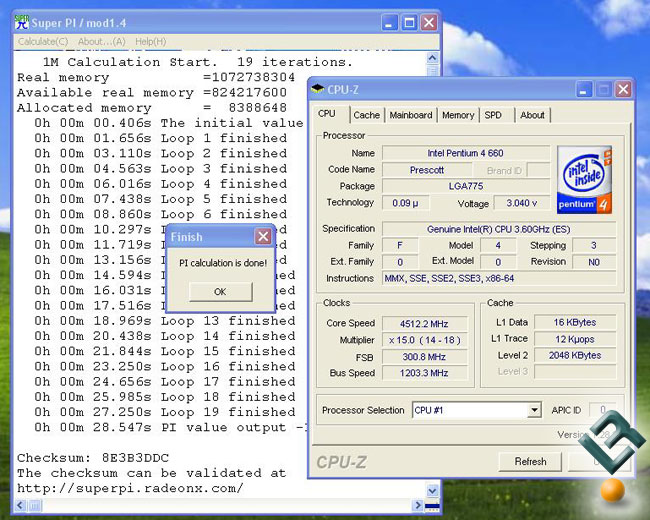 Not too shabby for not even trying to overclock!
by -mogwai
holy crap
by whipme
That's very cool,
but why run the memory at 5-5-5 latencies?

I would also like to know if it worked at lower Vcore voltage?
I push my 550 to 4.2 on 1.4250v, but haven't ventured further
yet because i'm still on air.
by LVCapo
There is always a "threshold" when it comes to overc locking, a point where you a large bump in v-core will only yield a small increase in FSB/performance.....thats typically about when you reach the limit of the processor, as the benefits grow smaller.
With your processor, is it totally 100% stable? A lot of times, a system will boot and run fine, until its placed under load for awhile, then the low voltage catches up to it and will cause crashes.
by whipme
it's 100% stable at those voltages and speeds.
as long as i keep my temps below 60C.
the highest load i've put the system under was when it was still running
at 3.99ghz on 1.4250vCore. I was compiling my HL2 mod and playing
HL2 at the same time, and all that happened was that my CPU temperature
reached 62degrees C.
If I run at 4.2, she's perfectly happy doing SuperPi 32m and other benches.

i'm busy builing a res for my water cooling setup at the moment, so
i haven't been able to venture past 4.2ghz yet.
by Zeratul
Nice 4.5 ghz...
Thats a 900 mhz overclock.
by yurchie
wow dude...impressive
by JasonE4
Not bad, but you could probably even do a little better. Many 630s have been achieving 1000-1200 MHz overlcocks on air!
by jtm55
Impressive, most impressive.
by heidrickla
Hit 5.3GHz stable with basically same rig, booted up at 5.4, 5.5, didn't bother to test at those speeds as I was more interested in how high it would go at the time. Watercooled processor and hard drives, Aquarius 3, p4 660c, borrow'd friends CM2X512-8000UL for the ram since my patriot 4300 couldn't hang. System was stable at 64c. Should probably pull the hd coolers though if I ever get some ram of my own to run this fast. I like to keep the temp as close to 60c as possible. I live in Houston so ambient temp is kinda rough I need some head-room. Knowing what I do now I could have probably done vaporchill and saved me a few headaches and alot colder system, but then again id be battling humidity. I got it to boot up at 5.7GHz but CPU temp jumped up pretty quick to 72c so I killed the power. Without the hard drives cooled id guess 5.5 or 5.6 would be doable temp wise and maintain 60c. Not sure if stable though. One thing of note. I just set the voltage to 1.5 and left it there for all the tests. At 5.3GHz Prime 95 ran for about a week with no errors. Another thing I was wondering about... What about vaporchilling the radiator on a liquid cooled rig to avoid the condensation around the block? With a high enough flow and some anti-freeze it might not freeze up. If anyone has the gear to test it. Post your results or email me [email protected] I'd do it myself but I have already spent about $5500 on this rig and cant afford the vaporchill atm.
by wingnut
heidrickla,

I'd sure be interested in your SuperPi numbers when you get a chance!
by heidrickla
Gave friend back his ram and loaded xp 64bit. For whatever reason the 64 bit version makes processor run hotter so I cant overclock it quite as much. Strange thing is when I drop the multiplier to 14 I can run the FSB alot higher in 64 bit than when I dropped it in 32 bit. Still trying to figure out what max overclock is in 64 bit with 14 and 18 multiplier. I'll post the results once I find out.
by JasonE4
I had the same problem with x64. I couldn't overclock as high, but I did get the same temps as 32-bit XP.
by gvblake22
hmmm, that's interesting about WinXP x64....
by heidrickla

Just got done verifying this new config. It's 32M Super Pi stable. I just installed, and ran one of each test on v1.4. I was using 1.1
by gvblake22
Very nice heidrickla. What cooling are you using? Your temps look pretty high for idle

by heidrickla
I've been noticing that as well. It was avg'ing about 44c under 0 load and about 54 under full load running windows xp pro 32bit at max overclocks for both FSB and CPU with 14 or 18. Really made no difference. Under 64 bit it appears to be a different story. Under 32bit I booted up at 5.3, 5.4, 5.5, 5.6 and temp was right around where it is now. 5.7 booted up then spiked over 70c. CPU overclock temp hits 68c under full load at 4.1ish in 64bit with with 18 multi. 64bit xp FSB overclock tops out at 290 with a bus speed of 1160 with a 14 multi and heat at 68c under full load.
It's water cooled. Reason temp is high is because the voltage is 1.544 on the Vcore and 1.65v on chipset 2.2v on ram. I think the PCI termination voltage is 1.3v. With FSB speed @ 290 the processor and ram wont pass Super Pi 32M with the next lower setting. Under full load it brings CPU temp up to 68c which I am fine with as long as it stays below 70c. If I raise the voltage on Vcore to next setting, under load it puts it over 70c and thats just too hot. Also it will fail if I try to raise the FSB one more to 291, so this looks like the max FSB overclock with a 14 multi.
In 32bit with FSB at 241 with a 18 multi instead of 14 processor is happy with a 1.3ish Vcore and 1.9v on ram. I just added active heatsink/fan cooling to the NB so the temp stays the same really at any overclock for the motherboard. The main issue with the temp being high is that all 4 of the hard drives are watercooled as well. These raptors get really hot and raise the water temp quite a bit. I'm thinking of going vaporchil on processor and leave the hard drives watercooled for my next set up. I'm just not getting the efficency out of watercooling that I was expecting. I probably set something up wrong somewhere or something but I don't really feel like investing any more in this particular computer at the moment.
The only other issue I see with it at the moment are the Mosfets thingies getting too hot. This might be causing some instabilities elsewhere. There are like 12 on this board and at 2 bucks a pop for some heatsinks that look a little on the wimpy side, I doubt they will make much difference and thus does not justify the cost.
Well sorry so long, but if anyone has any insight to add to make this thing go faster feel free to make any suggestions. Perhaps list your results with watercooling on a similar processor so I can see if there's something wrong or if I am getting about avg. One thing I should note... at the 5+GHz overclocks I was using my friends ddr2 8000 ram mine is only ddr2 4300 well it says its 5300 I think but I've never got it to post at 710 so I doubt it.
by Black Mesa Scientist
You'd do even better with a good cooling set
by heidrickla
Not sure how I forgot to, but I didn't turn down the CPU voltage after I got all the other stuff stable at 290 FSB. I meant to but it was late and guess I thought I already did or something. I turned it down to 1.4875v and it passed Super Pi 32M at this setting. Im runnin SP 32M now with 1.400v at the moment and it looks like it's going to pass as well. It can probably go lower but now under full load CPU temp is 57c, quite a bit cooler. Final CPU voltage will probably be 1.3ish. The limiting factor on this computer is really the ram.
by heidrickla
Dropped Vcore to 1.3375v and its 32M stable. Also dropped the ram voltage to 2.1 and still stable.
All times are UTC-06:00
Page 1 of 2
Powered by phpBB® Forum Software © phpBB Limited
https://www.phpbb.com/