by Kaos Kid
Hey all

The interesting thing (and the reason I am asking) is that both Dell Financial Services and Dell Auction sites have the same Opty 755 USFF listed for sale of multiple off-lease units that have the E8400 installed, so it does appear that it will work.

Whaddya think? should I take the chance and swap out the X3070/E6700 for the E8400? So you know some background, Dell had just replaced the mobo in the 755 under service agreement about a month ago so it is a new mobo. My little girl loves this unit because it has such a small footprint on her desk, so I would hate to FUBAR it and have Dell balk on replacing the mobo again, lol. Unfortunately the geek in me wants to upgrade it as high as possible for her so I am torn on what I should do--maintain the status quo since the X3070 is doing the job OK, or get greedy and go for the gold?
WWYD?

by skier
if the cpu doesnt work in the board, all it will do is 'not' post, it shouldn't damage anything either way, just remember to clear cmos before you put in the 8400 and again if it doesnt work

by Kaos Kid
Yeah, I asked this in the Dell community forum too and they think the same thing, since the chipset itself supports all the way up to C2Qs. No one there has any idea whether Dell had "dumbed down" the bios to reject it since it is in an USFF case. What worried me was if it would survive the transition from the current 65nm cpu to the Wolfdale 45nm. I would think that it would actually run cooler at stock speeds than the X3070/E6700 that I have in there now and be less strain due to running at lower voltages (max 1.5v for the X3070 compared to max 1.3625 for the E8400). Still had to ask though, since if I screw up this unit for my little girl she will be very disappointed. She had originally wanted a laptop, but I was able to compromise with this since it is so small but yet her LCD monitor fits on top so only takes up a small amount of space.

Thanks, as always, for your input skier!

by Kaos Kid
Update: I decided not to put the E8400 into the 755 USFF, I was testing it with the board I got with it (GA-P35-DS3L) and also my boys' HPDC7800, and in both AIDA64 shows a bit of temp fluctuations between cores. I ran Prime95 for 15 minutes, and the temps showed CPU:58C Core1:54C Core2:46C in the DC7800 (thermal fan settings in bios at medium). After googling I found that lots of people reported this same phenomenon with the E8x00 cpus, so I'm not sure whether it is just a faulty core temp sensor or not. I believe the "CPU" reading is for top dead center on the heatsink and 58C under load doesn't sound that bad but I don't want to put this thing in a case that is already limited in cooling capabilities. I will just leave it in my boys' DC7800 since it seems to be running OK and he doesn't really put it under full load for very long anyway. The bright side is now I get to play with the Q9450 in the GA-P35 board and see what it will do with stock air cooling. That's my fun project for the coming week, lol.

Sent from my PC36100 using Tapatalk

by Kaos Kid
Running latest bioses in both boards I tested it in, and have checked temps using AIDA64 2.00.1700 installed, and also v2.00.1740 beta that I have as a portable app. Both show the difference in core1/2 temps. Just now I checked it (in the DC7800) and idle temps vary even more, with Core 1 at 43C and Core 2 at 31C, so the fluctuation is actually less under load. I don't remember the Q9450 showing temp fluctuations across cores while it was in the DC7800, but I will pay closer attention when I install it in the P35 board. Thanks for the replies gentlemen. 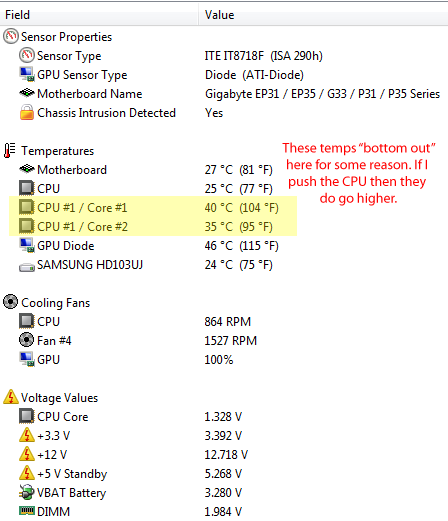 by Kaos Kid
Yep, it looks like the same thing going on. Thanks for going to the trouble of confirming this for me in two separate boards, I appreciate it. I'll just keep it where it is, it'll be kept at stock so temps shouldn't be a problem.

by Major_A
No prob.
All times are UTC-06:00
Page 1 of 1
Powered by phpBB® Forum Software © phpBB Limited
https://www.phpbb.com/