Discussion about Intel CPUs and overclocking. Need help with that new Intel processor? Not sure which one is right for you? Like to void your warranty? This is the place for you! Please keep the topic on Intel Processors!
Post Reply
20 posts • Page 1 of 1

So I am finally getting an i7 (to arrive late this week), granted it may be old now but 8 threads of intel power for $80 shipped (OCN) is too tempting to bear

So it'll be a 920 D0 chip, and in an EVGA X58 Tri-SLI i'm picking up at the same time, with 2133MHz (Dual Channel :/) CL9 Ripjaws until I get a set of Triple channel
It will be under a CoolerMaster Hyper N 520 because it's the only heatsink I have aside from stock that will work on 1366


Any thoughts? guesses to max single-core stable for superpi? ;)

oh man... You are making me think way back here.

I know back in 2008 I owned a couple of these and all would do 4Ghz with no voltage increase on air, so I'm sure you'll easily break that.
Find us on Facebook to discover the faces behind the names!
Follow Me on Twitter!
Top

Gonna be fun learning the platform, also just ordered a Dominator CL9 2000MHz 3x4GB Kit with fan. high-end triple channel kits are few an far between these days so I figured I should get them while they exist! should just arrive a day or two after my Board and CPU. remembered to use the LR shop-through link I bookmarked so hopefully that works!

Gonna be it for my spending spree though, planning on moving soon now 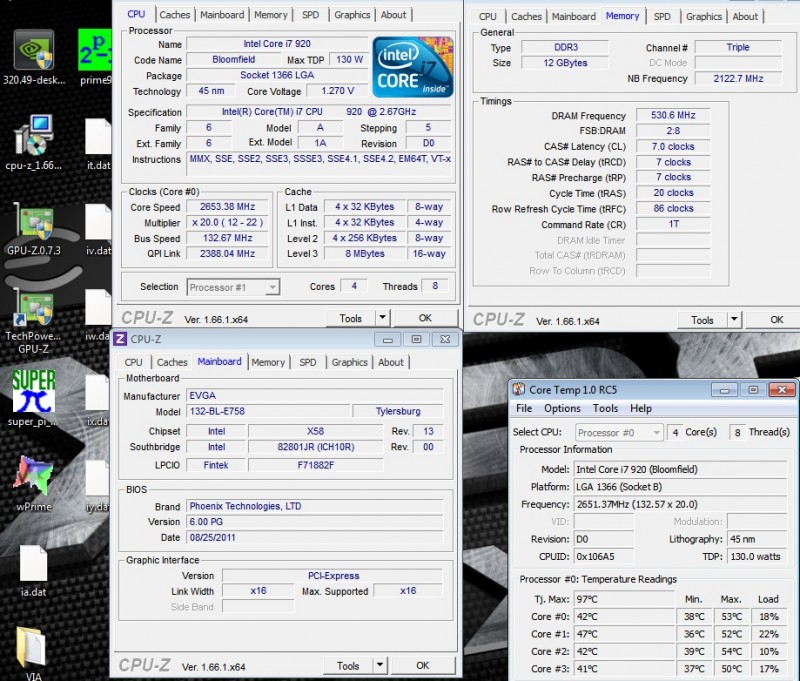 (relatively) Isolated BCLOCK testing, 207 stable, hangs at 210 during the burn test, 7 seconds in, and hangs 14 seconds in at 208BCLOCK 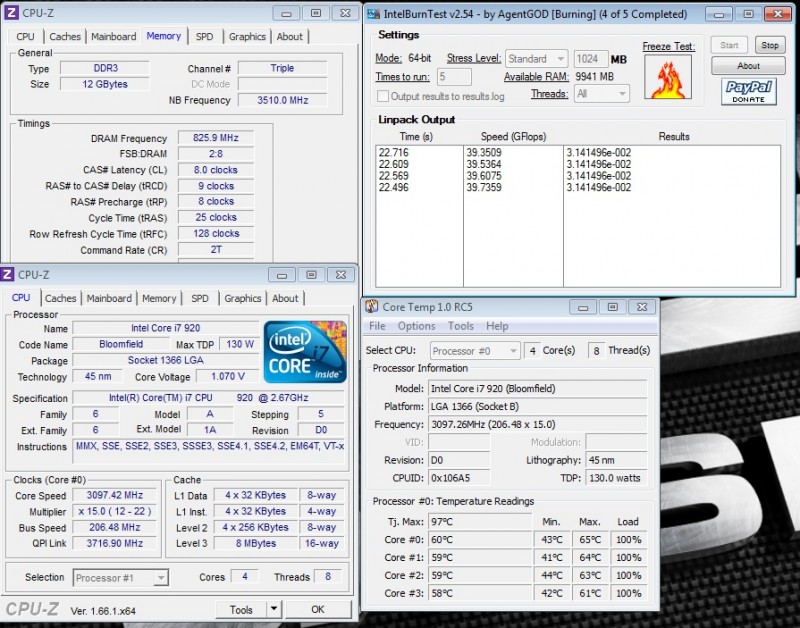 Could go higher there, but only want 1.45v VTT max, uncore multi gave me problems at 192 BCLOCK and higher so I had to lower the uncore and RAM multi's to break my 200 goal
-Austin

starting to hit a little problem: 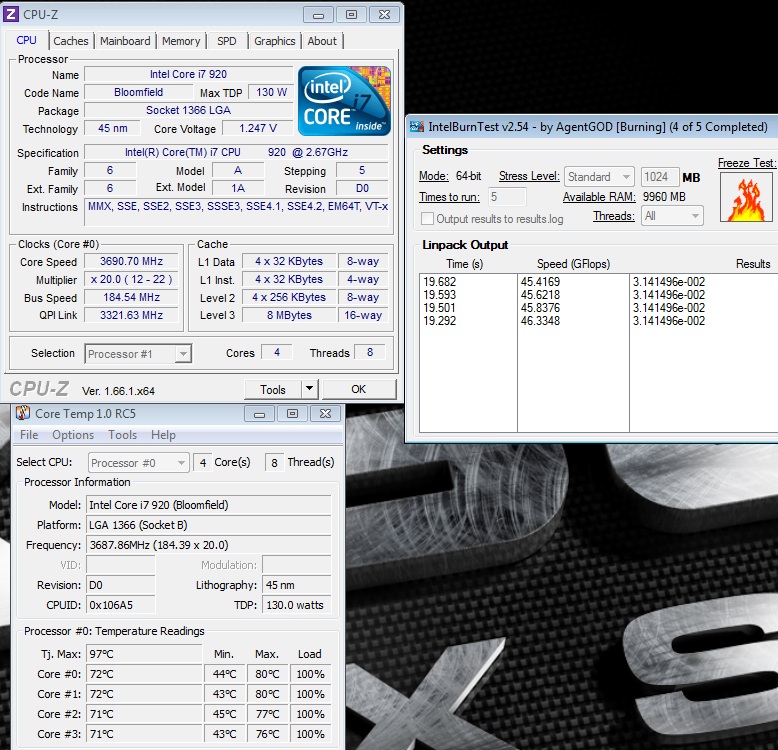 This isn't over.
-Austin

How's it going Austin? Any better luck?
I have come to the conclusion that "FaceBook" should be renamed "FacePalm" 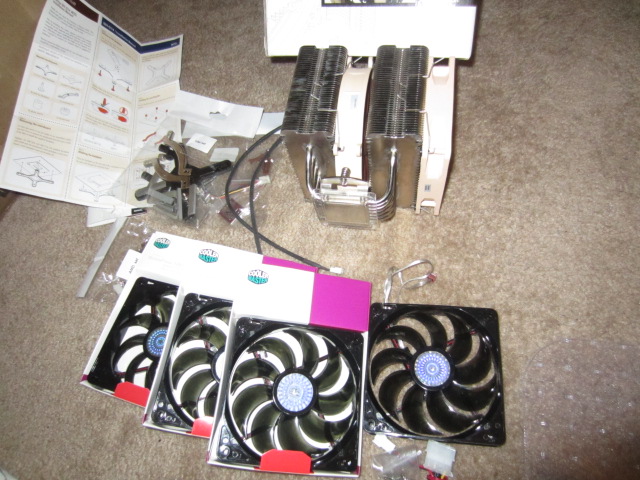 But it's a wee bit tight, I actually couldn't have the Mosfet heatsink installed until after the DH-14 was screwed down and the fan is resting on top of the Memory heatsinks so I had to move the Corsair fans off the edge of the other two sticks of memory 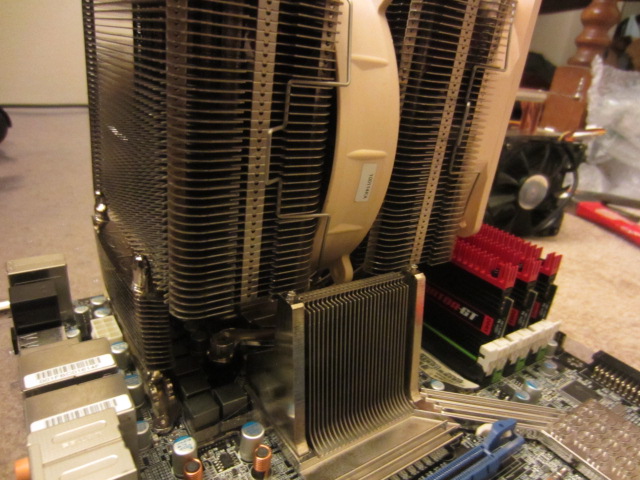 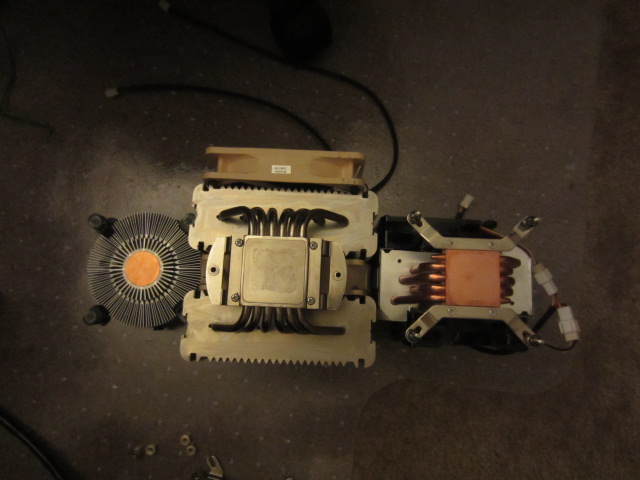 
The goodies just got installed last night and I'm on-call this week so I havn't had too much time to play with it, yet, but load temps are around 75 now at 3.9GHz, not sure I can get much more out of this CPU for 24/7 unfortunately, might snag another i7 with a higher multi off OCN next time I see one for sale.
-Austin

Sweet! Well if you can't go any higher with that Noctua then you've probably got it balls-out. Good luck with the tweaks!
I have come to the conclusion that "FaceBook" should be renamed "FacePalm" 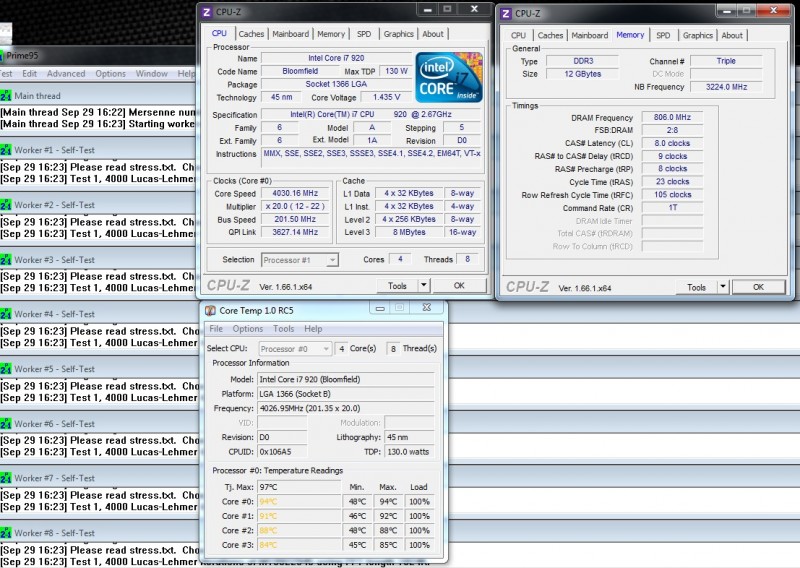 Lapping heatsink and IHS are my next step, right now the fans are all on a Silverstone fan controller (with a couple ghetto 3-pin extensions) and spinning relatively quiet so I think i'll see if I get this as my 24/7 clocks now
-Austin

well I have a 2.67GHz Xeon on the way that I know is good for 4.2 at low temps and low voltages

Once I get it and the MSI GTX660 , i'll do some final overclocks with the 920 for HWBot and pull it out and start all over again

Final update on the 920: 2-core ballz out overclocking. It didn't boot more than once at 212 BCLK, but once is all I needed 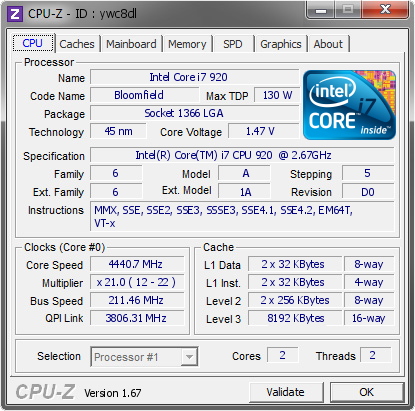 Nice!
I have come to the conclusion that "FaceBook" should be renamed "FacePalm"

Wasn't planning on even installing it yet, but... 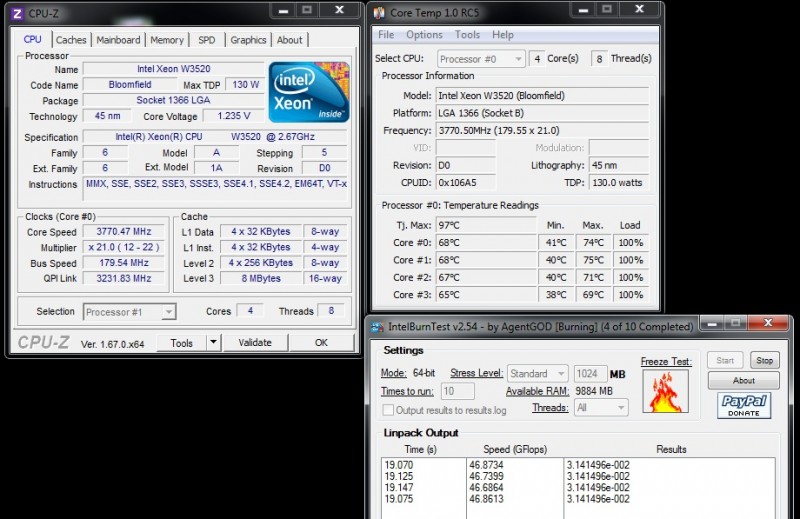 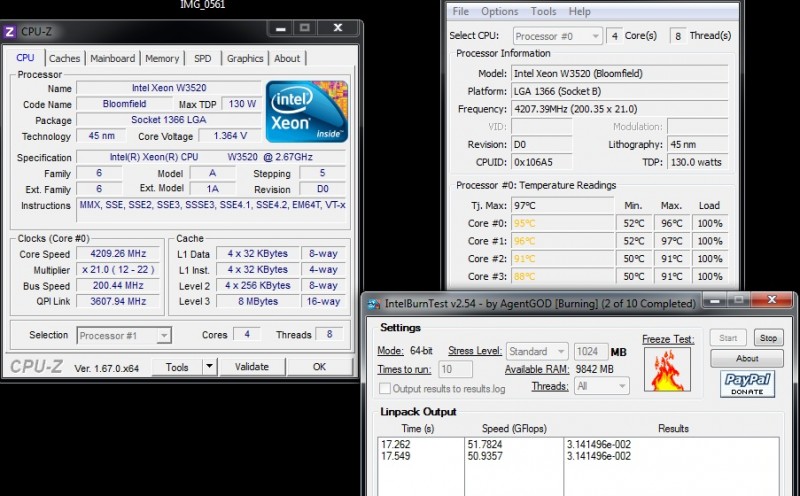 It gets a liiiittle toasty too, need to lap this DH14

Going for all the Gusto she has: 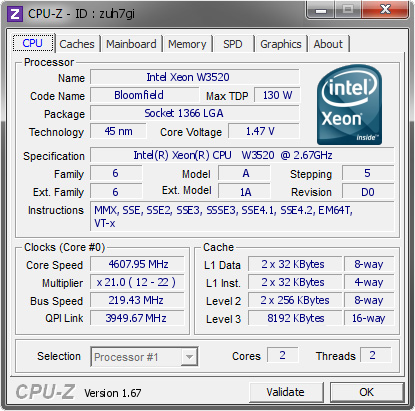 
Because a new friend showed up earlier this week 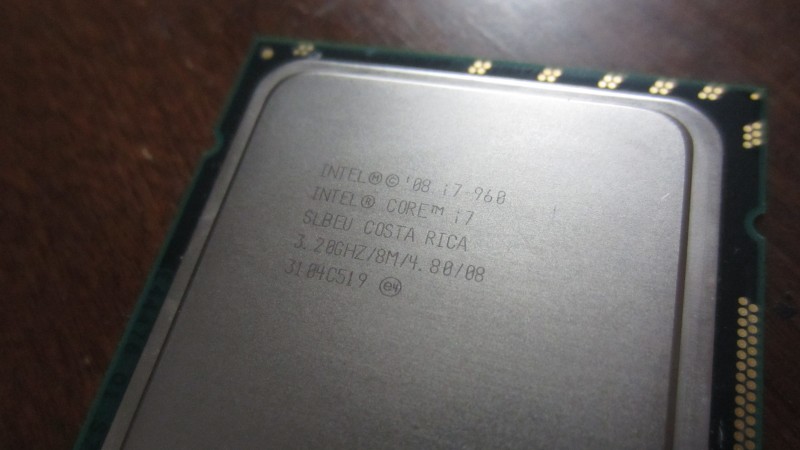 2Ghz OC = AWESOME!
I have come to the conclusion that "FaceBook" should be renamed "FacePalm"

Stick the system out in the garage when it's cold as ballz outside. Also put a small house fan blowing on the motherboard/CPU and go nuts.
Top

Major_A wrote:Stick the system out in the garage when it's cold as ballz outside. Also put a small house fan blowing on the motherboard/CPU and go nuts. 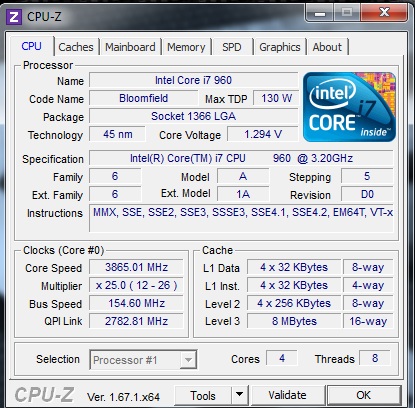 Not a bad first boot

Through an unfortunate circumstance, I have now acquired an HP 3770k-based system and grabbed an Asrock Extreme4 to go with it for my main rig, so the Lapped W3520 and all my shiny X58 gear will be heading off to ebay 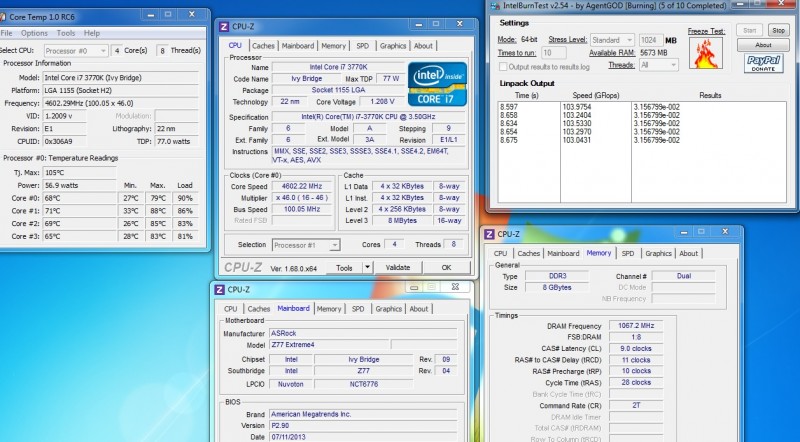 Quite surprised to see the difference in GFlops between the 4.2GHz W3520 and the 4.6GHz 3770k (better than double!

The clocks above are manual, after a half hour of tweaking.

Improved silicon and instruction sets will do that to generic benchmarks. I doubt that you would notice a huge difference between the overclocked X58 and the stock 3770K with a program like HandBrake or Photoshop, etc...
Top
Post Reply
20 posts • Page 1 of 1