Discussion about Intel CPUs and overclocking. Need help with that new Intel processor? Not sure which one is right for you? Like to void your warranty? This is the place for you! Please keep the topic on Intel Processors!
Post Reply
34 posts

Decided to lap my E6700 B1 IHS and it's the best lap job i've done so far compared to what I did on E6600s. E6600s didn't gain any clocks or temp reductions when lapped as the IHS was already flat.

But E6700 cpu when i started to lap only the 4 corners went to copper for a while so the IHS was definitely concave! See here the edges were first to go.

So far prelim tests at 3600mhz at 1.394v show a 3-4C reduction in idle temps and 5-7C reduction in load temps but i forgot what the room temps where before lapping so who knows heh.

nice write up... I didn't know these were copper and what a huge performance difference it made. Very nice and 4GHz

I'm pretty sure mines concave as well. But I'll probably go the RMA route instead. I bought it Open Box from ZZF, and it looks like whoever mounted it well for one used way to much As5, took me an hour to remove all the spill over and the only marks on the head spreaders are in the corners. We'll see how it performs. I hope to get everything up and running by tonight.

eva I was thinking I have seen this writeup before then it dawned on my at OCforums.

Its reassuring to see that you are getting similar temps to me at 3.6G, though im having difficulty getting my OC dual prime stable, I had to put the volts up to 1.65 (1.6 'real') and I dont want to really put more into it, Do you think that its worth lapping the IHS to see if it would help, or would you reccomend I stay well away from it (as I've never lapped anything before

(Yeah, i know how flat it has to be when you've finished!)).

And a question for apop, how many MCH volts do you have to use for 400Mhz FSB on the aw9d max?

dicecca112 wrote: eva I was thinking I have seen this writeup before then it dawned on my at OCforums.

DMB, you on water or air ? i guess lapping would help more for water than air but if you have to shove 1.6v into it for 3.6ghz then it's probably just a poor oc'er to begin with.

Already had one to 90C on the bad axe board that got stuck at 1.9Vcore... LOL
Top

Apoptosis wrote:
Already had one to 90C on the bad axe board that got stuck at 1.9Vcore... LOL

hehe.. no amount of lapping will help that cpu

Did you ever get word back as to what happened ? Were you using badaxe 1378 bios by any chance ? seems Intel has removed 1378 from their download page.. leaving 1351 and lower bioses.
Top

Shame... IIRC you have a nice clocking cpu too 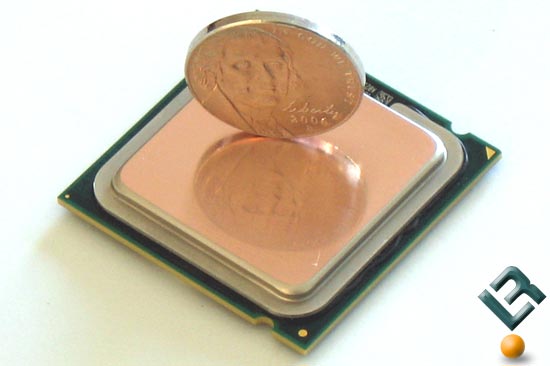 Couldn't let you one up me

I figured I'd remove the IHS while I was at it so out came the razor blades and the torch... 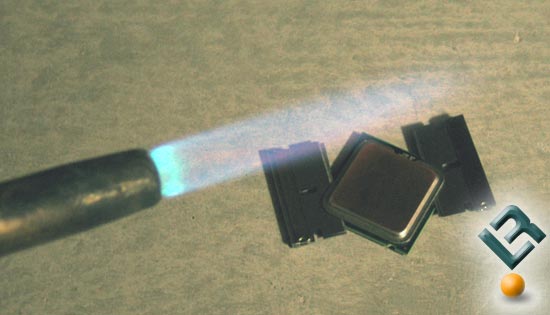 Can you say POP? 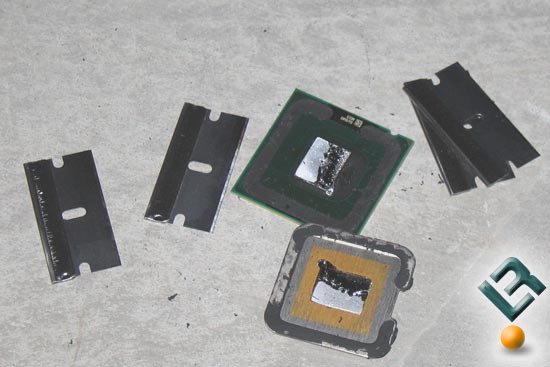 apoptosis you have balls my friend. Not that I doubt your skills but does it still work.

dicecca112 wrote:apoptosis you have balls my friend. Not that I doubt your skills but does it still work.

we will find out once it's all cleaned up ;)
Top

Does it still work?
Top

anyone know a good way to clean the core up?
Top

All the removals I have seen, the time didn't stick to the core.