This is the place to discuss the latest computer hardware issues and technology. Please keep the discussion ON TOPIC!
Post Reply
38 posts

Multiple questions:
- How big of a case is the Antec P180? Is it big enough to fit a 10.5" graphics card?
- How overclockable is the Q6600? How exactly do you OC Intel processors these days? It seems complicated compared to OCing the old Athlon 64 X2s.
- Aren't they gonna run out of Q6600s? Am I gonna have to get the Q9300/Q9450 instead?
- What's the difference between/benefits of the Yorkfield compared to the Kentsfield processors?
- Are the Asus P5E Deluxe and Asus Rampage Formula worth considering in terms of overclocking?
Last edited by InsolenceAndHeresy on Mon Jul 21, 2008 8:36 pm, edited 4 times in total.
Top

The Q6600 is easily overclocked, two of my friends got them. Only have to adjust the FSB frequency and easily get 3,0Ghz without anything else, provided you have a good cooler. The other got his to 3,6 Ghz with extra voltages.
The mobo supports Crossfire.
i believe you can get the frequency higher on the RAM with the higher FSB.

your chosen CPU cooler will hold the 3,0Ghz but don't know if it gets the heat down if you go even higher.

Probably the only two changes I would recommend (however, you know what they say about opinions

- I would go with one of the P45s (P5Q series)
- I would go for an E8400. It's Wolfdale, it starts at 3G, is 30 buck cheaper, and will probably overclock better than the Q6600. I don't think quad cores buy you very much in gaming and by the time it does there will be faster, more efficient, and cheaper quads out there.

Either way it will be a nice upgrade for you...


InsolenceAndHeresy wrote:Multiple questions:
- How big of a case is the Antec P180? Is it big enough to fit a 10.5" graphics card?
- How overclockable is the Q6600? How exactly do you OC Intel processors these days? It seems complicated compared to OCing the old Athlon 64 X2s.
- Aren't they gonna run out of Q6600s? Am I gonna have to get the Q9300 instead?
- What's the difference between/benefits of the Yorkfield compared to the Kentsfield processors?
- Does the Asus P5K motherboard support Crossfire?
- Well, like with the Asus P5K, it says the supported FSBs are 1066 and 1333... so I can't push the overall FSB higher than that?

- The P180 might be a squeeze on a 10.5" card, but you can remove the upper drive cage to get it in. The problem is not so much the card itself as the placement of the PCI-E power connectors. Unless you are using a bunch of drives it should fit fine with the upper cage removed.

- Overclocking Intel CPUs is easy, a lot of the complications arise from extreme overclocking and balancing the RAM overclock. My E6850 goes quite nicely to 3.4G on the stock cooler with no voltage tweaking by just upping the FSB reference.

- Yorkfield (and Wolfdale) are 45nm processors so they're generally a bit less power hungry and a bit cooler running (though I believe the later steppings of the Q6600 are 95 watts as well). Also you have 1333 FSB, SSE4 and some other stuff. Google it as there's a ton of comparison info out there.

- The P5K supports crossfire at 16x4 mode only, my reasoning for suggesting a P45 board is that if it is implemented on the board (some don't) they can do 8x8 Crossfire. (X38/X48 is also a good option but starts getting a little pricey, depends on your budget)

Thanks for the responses!

16x4 means the first card in Crossfire has a PCIe 16 connection to the mobo ( more bandwidth) and the second gets a 4 connection ( a fourth of the 16 in bandwidth speed). At 8x8 both cards get 8 so they have the same data bandwidth to the mobo, the 4 could pull down the performance a bit.

InsolenceAndHeresy wrote:I'm too lazy to wait

That's a whole new level of laziness, and I applaud you for it

All kidding aside, I'd wait for the X2.

Not sure about the 900, but as I said the 10.5" card "may" just fit in the P-180 but you may have to remove the upper cage in the P-180 to install the card and get the cabling ironed out then re-install the cage, I'll open up mine later and have a look.

ratNukit answered the confusion about the way I described Crossfire lane usage.

To be honest, with what we have on the table these days you would probably be fine with 8x8 within the lifetime of your new system (hence the P45 recommendation). That said, one of the advantages of X38/X48 would be true 16x16 Crossfire. Also note that several X38/X48 boards support DDR2 so spending the extra money on DDR3 isn't neccessary. The downside of X38/X48 is they are a bit costlier than their P35/P45 counterparts but it depends on budget. Asus and Gigabyte are usually my two preferred brands but I like Intel as well (but AFAIK Intel is ALL DDR3).

My statement about overclocking was directed at the E8400 (or dual cores in general) vs. quad cores, not quads vs. quads. In other words all else being equal a dual core usually overclocks better than a quad (of course there is a large amount of variance in overclocking so YMMV)

I'd really like a quad core, as when apps/games that do fully use Quad Core come out, it'd probably be less gimping to have an old quad core than an old dual core.

InsolenceAndHeresy wrote:I'd really like a quad core, as when apps/games that do fully use Quad Core come out, it'd probably be less gimping to have an old quad core than an old dual core.

Don't look at outside measurements, it's all about the placement of the internal drive cages and components.

Mucho thanks again man... (and much more in advance)

I'm probably gonna be asking lots of questions till I get the rig so ... :D

It seems that the Antec Nine Hundred has its drive bays pretty much built in, and the fan bracket inside further lessens space, so D: - P180 for me I suppose?


Is the fan next to the PSU on the P180 removable? I heard it has issues with some large PSUs.

Also,
Are the Asus Rampage Formula and the P5E Deluxe worth considering in terms of overclocking?
Top

No problem, I'll be as helpful as I can (Lord knows I've had plenty myself

) but don't listen to one persons opinions, there are many on this board who know a lot more about this than I do

The P182 is really just a response to some of the original P180 owners comments (like the rear fan controls that were alluded to) but yes they are pretty much the same.

I'm not positive but I'm pretty sure that two 10.5" cards would fit with the upper drive cage removed and yes, with it gone there is loads of room for longer cards. Note though that getting clean cable management in this case is a bit difficult and I would go with a modular PSU if possible.

Yes the lower case fan is removable but I wouldn't do that if avoidable as it provides cooling for the PSU and hard drives (the lower bay is isolated from the case airflow in the upper bay). My Corsair 620 fits quite well. I would just verify the measurements on your PSU of choice and make sure to get one that plays nice ;)

I'm hesitant to recommend a specific board for good overclocking if I've never used it before because:

1) I am not an extreme overclocker
2) I would be getting my info the same place you would, on the web...
3) Overclocking is not an exact science, so even if I said that my DQ6 and E6850 overclocked to 4ghz no problem and you rushed out and bought those two you might not have the same success.
4) I don't want the blame

Don't have a P180, but I do have the P182. Supposedly, the P182 is an improved version of the P180 (e.g. improved cable management, etc). Yes, the fan between the power supply and the lower hard drive cage is removable. I use a Corsair 550VX (same size as the 620HX, I believe) and I wouldn't get a power supply any longer than it if you want to keep the middle fan. Not sure how much it actually helps with regards to airflow, though. If you remove the upper hard drive cage, you should be easily able to fit extra long video cards.

My DDR2-1000 works OK, albeit with relaxed timings. If I had it to do over again I would have spent the extra though, just for the headroom. The difference now is only $20 or so. That said, don't get a worse PSU to get the faster RAM!

Well, if a set of DDR2-1000s give a certain voltage and timing in their specs, doesnt that mean I can run them at full 500 FSB at those given settings?

Anyone have any thoughts on the Asus Rampage Formula or the Maximus II formula?
Top

With the Antec Nine Hundred you can remove the rear fan housing on the center drive cage, giving you an extra inch or so. i can fit the 8800GTX in there with the fan in place. I don't have any pictures right now, but it's a tight fit.
Gamer - Thermaltake Element S | PC Power & Cooling Silencer 750 Black | Gigabyte GA-EP45-DS3L | Intel E8400 | Arctic Cooling Freezer 7 Pro | 4GB OCZ Reaper Ram | XFX 8800GTX | Creative X-Fi XtremeGamer | Seagate 7200.10 320GB

this is the only picture I have right now. I haven't been able to get around to the cable management, so it looks like crap in there.

As for fitting... you can see on the power end of the card, there is the black plastic fan housing. As I said, it can be removed and give you another inch or so, but I didn't have to remove it and actually ended up installing another fan in it. 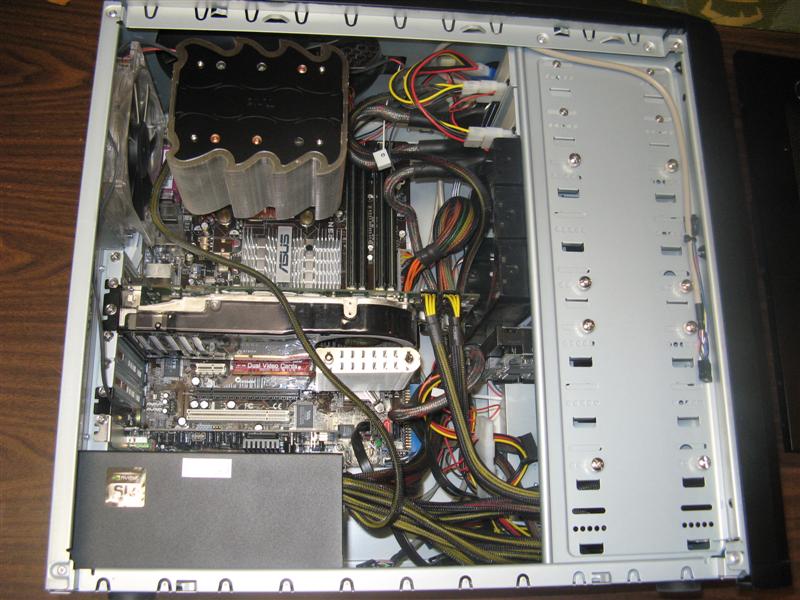