This is the place to discuss the latest computer hardware issues and technology. Please keep the discussion ON TOPIC!
Post Reply
9 posts • Page 1 of 1

Hi guys, yet another query.

Basically my PC boots up like normal, but just before it gets to the log in screen it shows the pale blue screen with no text and then reboots. what could be causing this?? Also it takes the machine a good 30 seconds if not longer to transfer from the windows loading screen to the log in screen. Again any ideas??

Something that is starting up in windows at the point is causing this.

boot into safe mode by pressing f8 during boot up.
once in safe mode run msconfig and go to the startup tab and disable everything then reboot.
Top

Microsoft got tired of hearing people complain about the Blue Screen of Death so they put in a nifty feature called "automatic restart" which will, go figure, automaticly restart your computer instead of showing you the BSoD. The problem is that when your computer is fubar it can get stuck in a loop or error-restart-error. Search on the method for turning off this "feature" for your particular OS then go into safe mode turn of "automatic restart" and then restart your computer. It should give you a blue screen with error codes. Post your error codes.
Deep in the human unconscious is a pervasive need for a logical universe that makes sense. But the real universe is always one step beyond logic.
Top

I can get into it and do everything normally. It's just the it reboots usually once or twice a week before it lets me log in. After the reboot it's fine. And regarding the hardware and software it has been doing this for about six months, which is about two weeks after I partitioned and re-formatted the hard drive.
It doesn't seem to be rebooting anymore. Is there some sort of auto repair thing??

While i'm on the matter of my machine not doing anything it is ment to. Nearly every time I turn it on and log in "explorer.exe" starts but doesn't work, i.e. desktop and toolbar at the bottom are missing but again after a restart all is well. Any ideas.

PS This only started happening when I was forced to repair windows.

start the stress tests (don't forget memtest on an Ultimate Boot CD or unix liveCD distro if you pass Prime95 Blend after several hours (sometimes it will error out, sometimes prime will freeze, BSOD, black screen, or just close prime within a few minutes of the test, other times you get a rounding error on just one core after an hour and a half))

Well I have run my virus scanner and that picked nothing up. Spybot found a few things but they were just double click and fst click. Ran "CHKDSK" and this is what happened 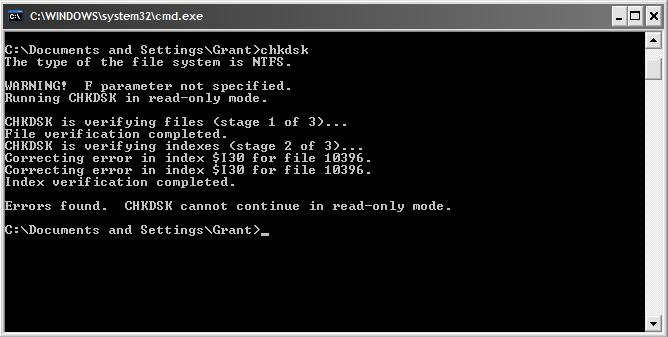 I've had some bad luck on a restarting computer as well, in fact im still figuring out what caused its restarting. some hard drive manufacturers offer some sort of hard drive checking software, you can try them. I contacted asus after i had exhausted most options and they said i should take my motherboard out of my case and only use my cpu, video card, and one stick of memory in the A1 slot. i used my motherboard box to hold the motherboard and my computer booted fine so i finished connecting the rest of my components with my motherboard still outside of the case and everything has been working great, no restarts reboots or bsod's. another thing i did is my hard drive was upside down in my case so i flipped it right side up. I hope that this helps.
My rig.
Asus M4A79XTD-Evo motherboard
XFX Radeon HD 4850
AMD Phenom II x2 550 BE cpu / Hyper N 520 cpu cooler
Crucial Ballistx ddr3 1333
Corsair TX 750
160 gb hdd
asus dvd burner
Top
Post Reply
9 posts • Page 1 of 1