A place for us to say thank you to our community by offering hardware contests! This is the place to be to check out and sign up for contests that Legit Reviews holds. If you don't like the prizes or how the contests are being run just don't enter and wait till the next contest!
Post Reply
471 posts

Our good friends over at Intel and CyberPower have assembled a system for Legit Reviews to give away that is based on the just released Intel Core i7-875K processor that just came out last week. We reviewed the Intel Core i7-875K processor and found that it packed a serious punch at a price that was much better than the Intel Core i7-870 processor that it supersedes. When we heard that Intel and CyberPower wanted to give a fully built system to one of our forum members as a way of supporting Legit Reviews we couldn't turn the offer down!

The system that CyberPower has put together for one of our community members is rather nice. It is based around an Intel Core i7-875K unlocked processor, but is also packed full of other goodies like an NVIDIA GeForce GTS 250 video card, 4GB of Kingston HyperX DDR3 1600MHz memory, Samsung Blu-Ray player, 40GB Intel SSD along inside along with another 1TB hard drive for file storage! All this goodness is packed inside a Cooler Master gaming case with Windows 7 Home Premium 64-bit and topped off with a keyboard and mouse! Not only will this system look good, but it will also be a solid overclocker and gaming system for one lucky winner here on Legit Reviews. CyberPower sent over this picture of the system, but as always what you get might vary slightly from what is shown in the image above. We know they core specs though as they are set in stone and after all can you really complain about a full system drawing?

A word from CyberPower:

"The new Intel K Series processors are here. To celebrate the launch, CyberPower, a leader in custom gaming desktop PCs, notebooks, and workstations, has teamed up with Intel to give away an Intel Core I system powered by the K series processor and blazing fast Intel SSD to a well deserved and lucky winner winner within the Legit Reviews community." 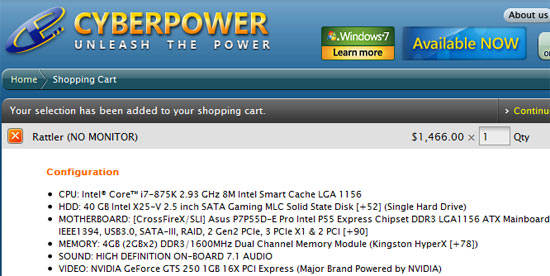 The Drawing Prize Details:
The prize for this contest is ONE CyberPower PC (may vary from the one pictured above, but the specs are the same). Intel and CyberPower told us that the total value for the prize at contest launch is ~$1,466. The prize will be shipped by CyberPower or Intel and they would only like to ship to the United States only. As a result Legit Reviews will not be able to choose shipping carriers, give you updates on the shipping status or expand the countries eligible for the contest (the sponsors decided that).
CyberPower Gaming System

Legit Reviews will be randomly selecting a forum member who entered this contest. In order to enter this contest you must make one and only one post to this thread saying that you wish to enter the contest. To be successfully entered into the drawing you must be an active member in the forums as well as being a resident of the United States. If you’re not already a member, you can sign up quickly and easily (and it's free), by clicking right here. The last chance to enter will be on June 29, 2010 and the drawing will be held June 30, 2010. The winner will be announced later than evening and will have 72 hours to claim the prize. If the prize is not claimed in 72 hours another name will be drawn on July 1, 2010. If you travel or will not be in town on June 30, 2010 be sure to have a friend check for you!

1) If you are an active [email protected] team member of Team #38296 then be sure to post your team name when you enter as you just got yourself an extra entry. If you are not on our [email protected] team you can find out more about the team in the forums and/or download either the CPU or GPU client and get started by entering in #38296 when it asks for a team number.

2) If you'd follow Legit Reviews on twitter and RT (retweet) for the contest that will also give you an extra entry. You must do this at least 48 hours BEFORE the end of the contest in order to be eligible for extra entry.

Good luck to everyone and we hope to get to know you a little better in the forums!
Find us on Facebook to discover the faces behind the names!
Follow Me on Twitter!
Top

place holder to announce the winner

Hope you enjoy the new system and you better post up some pictures!

Count me in. Thanks for another sweet contest.
Top

I'm in. Thanks Legit Reviews and CyberPower.

i wish to enter this contest

#2 I am a fan of LR on Facebook , name is Alton Engelman

I would love to participate In this. I have been a long time article reader, as well as a Twitter follower, and will definitely check out the FB page.
Top

Enter me in the contest.
Top

Enter me in the contest please.

Awesome contest, count me in!
"He that is of the opinion money will do everything may well be suspected of doing everything for money." -- Benjamin Franklin
Top

Winning this system would be nice.
Top

Thanks to cp and Legit reveiws
wileys
Top

I'm needing to replace my 6yo computer. Count me In.

All wrapped up in a Lian-Li PC-G70a
Top

My games could really use a new beast. Count me in.
Top

Count me in.
There is no theory of evolution. Just a list of animals Chuck Norris allows to live.
Top

Yes I would like to enter the contest. Good Luck everyone! What a great prize!