Discussions about AMD Processors and overclocking. Need help with that new AMD CPU or not sure which one to buy? Like to void your warranty? This is the place for you! Please keep the topic on Processors only!
Post Reply
51 posts

as for the warning go to your PC health status page of your BIOS where it lists the voltages you are at and temperatures, i set everything to disabled in the whole tab (CPU smart fan, System smart fan Hardware thermal protection, and anything that says warning etc.)
-Austin

These are the settings that I have been changing. After reading and re-reading your post, these are what I thought that you were talking bout. Are these the right settings to be altering?
"Gentlemen! You can't fight in here! This is the war room!"

Windows started into repair mode (pressed the wrong key)....gotta wait til it finishes cuz it won't let me cancel it. When it comes back up, I'm gonna reset everything to default and start from the beginning. When it comes back, the actual voltages...do mean displayed in the BIOS menu or in CPU-Z? ( Again I send my many thanks...to say that I am a newb...well, I've never played with a BIOS before...LOL)
"Gentlemen! You can't fight in here! This is the war room!"

for my specific chip and 890GX board 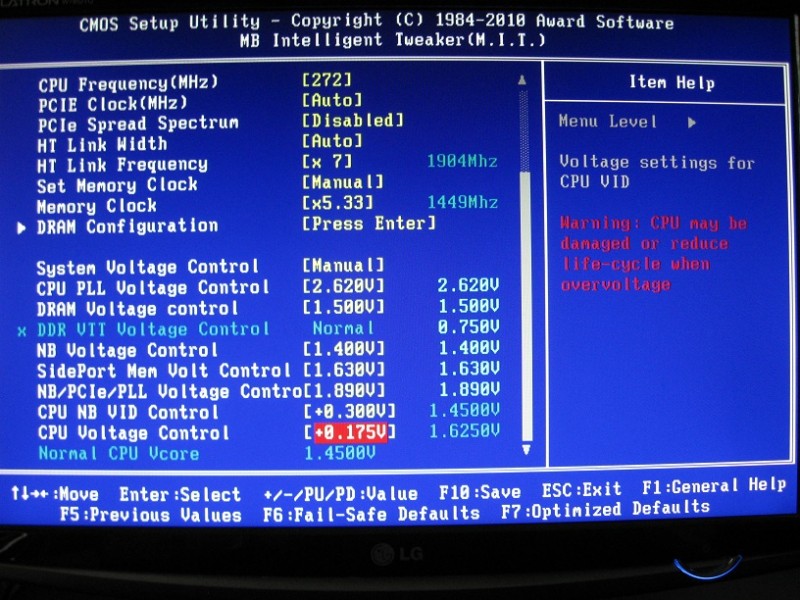 pretend that says +.200 for CPU^ and sideport should be set to normal, i've had that pic for a while and change things daily as i'm in the middle of doing some 4.13GHz benchmark runs (start doing the runs at 10pm when it gets cold outside (cold being 45F)). 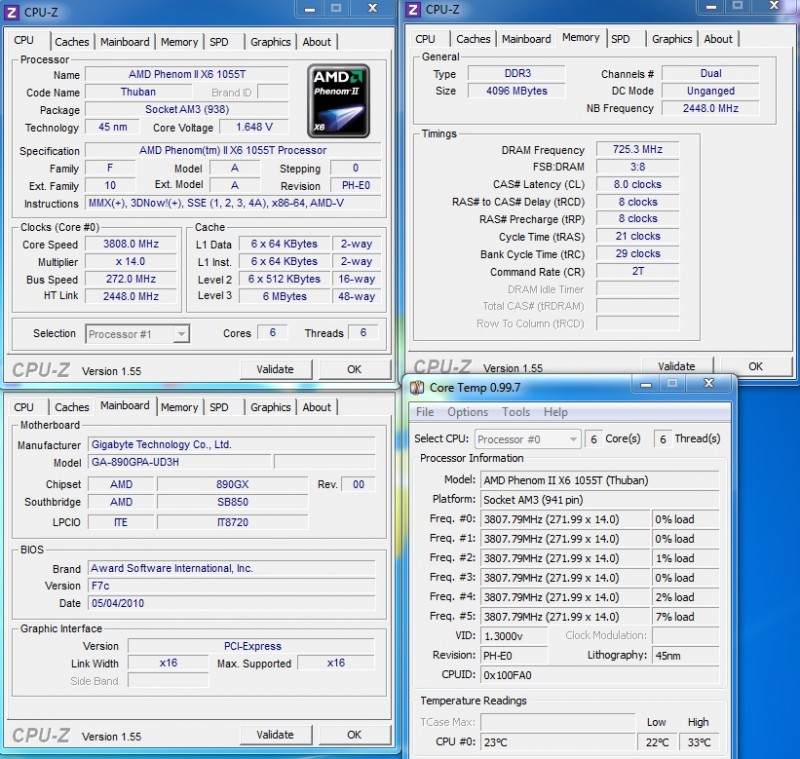 just know as you're doing it, crashing is NOT bad, if it boots at all it's a good thing really the only time i get mad is when it doesnt come back from a reboot with new settings and i have to clear the CMOS and reenter all settings

if 220 isnt stable at stock voltages, +one notch on CPU voltage and CPU-NB

can also just set the PLL and NB voltage and NB/PCIe/PLL voltage one or two notches below orange and leave them there the entire time you're overclocking, those settings don't add much heat and are mainly just for additional stability. orange or red is too high for all values for day to day use, if you do that then you can really just focus on CPU-NB and CPU voltage

can make that into a flow chart haha

edit: when you get just a black screen it means you need to hit the clear CMOS jumper by your CMOS battery on the mobo, use the jumper for about 5sec then put it back to normal location
-Austin

Thank you for all your help today, bro. I've got the CMOS cleared, and all is back to stock. I'm gonna give it a break for tonight (cross-eyed and headache-LOL), and get back into it tommorow after work. I have this post marked, and will be hitting it again tmw. I will definitely keep that in mind about crashing. And I've printed some of this post to reference. It's kinda confusing since we're not looking at the same BIOS. LOL. Thanks again and we will probably talk tomorrow!!!
"Gentlemen! You can't fight in here! This is the war room!"

ok, so far so good. included are pics of my BIOS, and screen of CPUZ and core temp running Prime95. 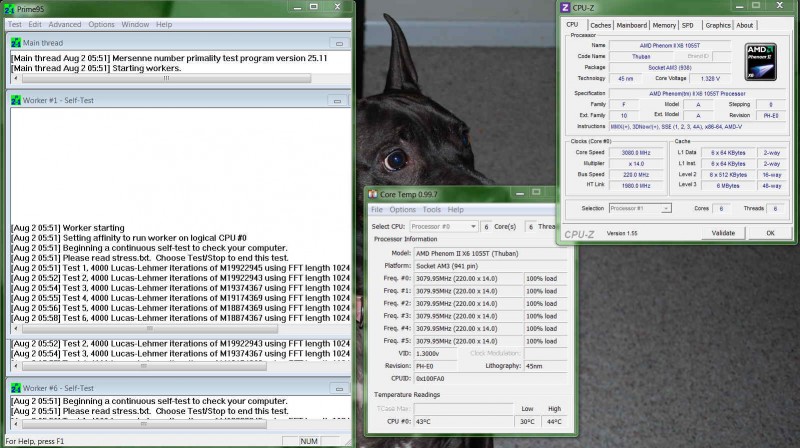 while running Prime for 6 minutes. not long, but no crash 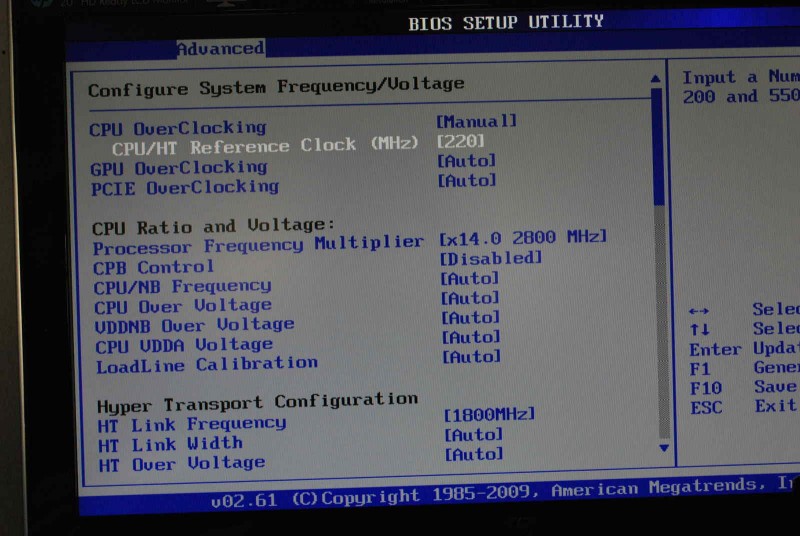 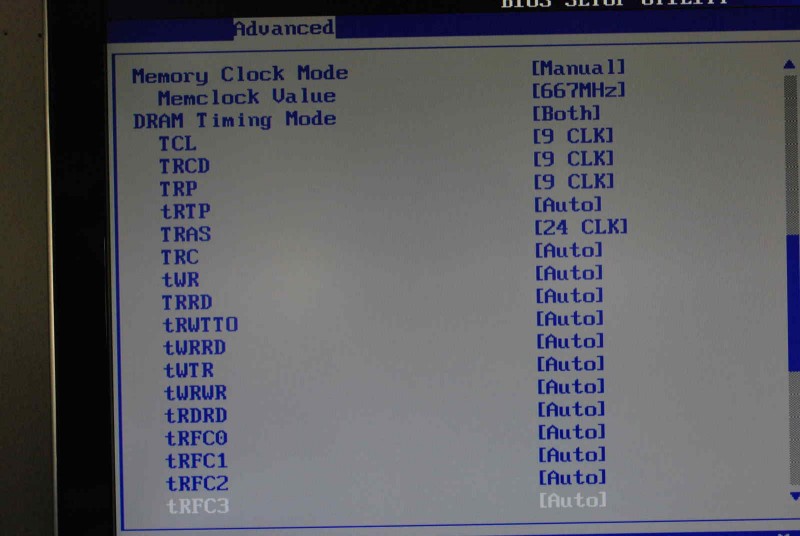 i'm gonna guess that VDDA=PLL, VDDNB=CPU-NB, and i have no idea what loadline calibration would be, is it a voltage or a frequency?
-Austin

Bumped up to 230 Bus, and CPU/NB Freq to 9.00x, and gonna give it another run. This is pretty close to the settings that I had last night when it was semi-stable.
"Gentlemen! You can't fight in here! This is the war room!"

OK, ran for over 20 minutes....I know, gotta run for longer....right now it's running stable @ 3.2, and I will be running Prime again later tonight. Got some home stuff to take care of, but will hit it again tomorrow, if not later on this evening... 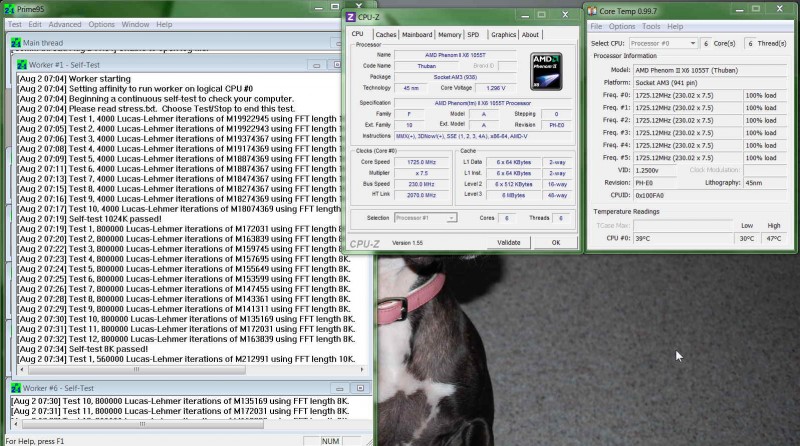 20 minute run of P95 Blend test....will re-run for longer, and reply with report....tomorrow gonna crank it up a bit

you must have either set your CPU multiplier to 7.5x or it is throttling, but looking at CPUz you need more vcore (CPU overvoltage) as you should be at least 1.35v not 1.296 (i would be at 1.4v or higher)
-Austin

Any reason why it could be throttling??? I just checked the multi and its set @ 14 in the BIOS

Just re-ran Blend and got this....


8/3/2010: okay, I'm trying to identify which setting need to be un"Auto"-ed in the BIOS, and what their respective default settings should be. I've been checking back to your replys and I think that I have it now....I've got the CPU voltage set to 1.425 in the BIOS, but it's still showing that Core Voltage drops to 1.344 in CPU-Z. Right now P95 is running, and gonna let that run for a few more minutes....is stable so far....then back to BIOS 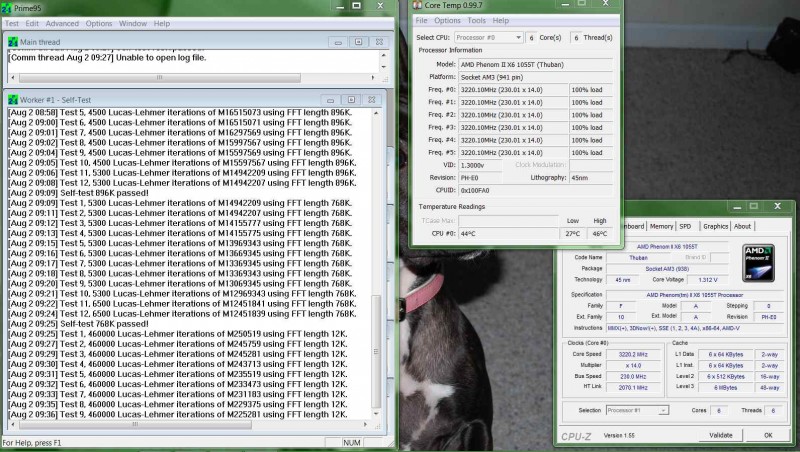 i would say keep going until load consistently breaks ~52C. thats still pretty cold, but the colder the better for daily use, mine loads at around 58C depending on the room temp and i don't like it that hot at all
-Austin

OK bro... i was able to get to 3.8, and my settings came very close to yours. The problem is, when I get into windows, and fire up core temp, cpu-z, and P95, CPU-Z is showing a multiplier of 7.5, not 14. Restart and check the BIOS, and it shows x14 multi, which is where I set it. Could this possibly be a voltage issue?

sounds like it is throttling it to protect something, what temps are you running at?
-Austin

as soon as I take the load off of it, it goes back to x14 multiplier. 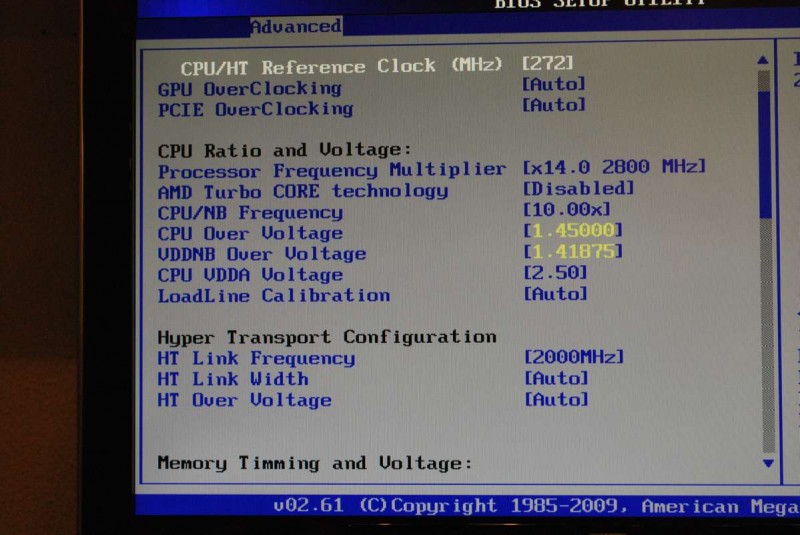 These are the latest settings in BIOS....will boot and load into Windows, but will throttle the multiplier from 14 to 7.5x

bump your CPU voltage to 1.5, see if it changes
-Austin

When I set the timings, I ran memtest and it all checked out good.

And as soon as I get home, I will change the CPU voltage and try again.
"Gentlemen! You can't fight in here! This is the war room!"

the problm with mixing RAM is that they are not made for the same voltage, my 1.5v kit (ripjaws) won't run above 1.545v and will not run at anything lower than 1.5v (a range which surprisingly allows 1250MHz-1730MHz mostly stable)
-Austin