Discussions about AMD Processors and overclocking. Need help with that new AMD CPU or not sure which one to buy? Like to void your warranty? This is the place for you! Please keep the topic on Processors only!
Post Reply
1 post • Page 1 of 1 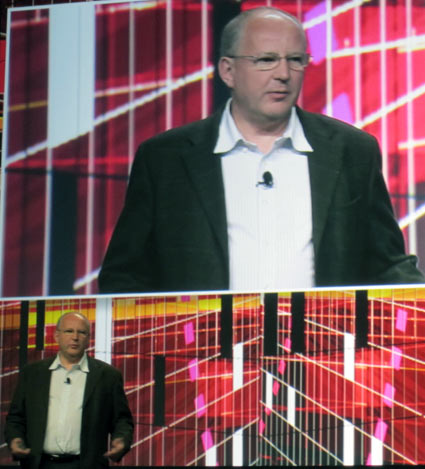 This afternoon at the AMD Fusion Developer Summit 2011 we had a chance to listen to noth other than Jem Davies, ARM Fellow, VP of Technology, Media Processing Division at ARM. It was interesting to see AMD and ARM sharing the same stage, but that happened today as you can see from the image below. He stated that x86 and ARM are going to be around for years to come. He also went on to say that Moore's Law is not dead, but that it is becoming less and less relevant. Jem talked about how as we move along process nodes that we won't be able to continue to increase clock frequency due to leakage issues. This slide is interesting in that it mentions 10nm and even 7nm process nodes. Notice that 7nm is shown in 2020. He also talked about Dark Silicon, which is going to severely limit what we can do with processors in the future. The space for mobile processors on the PCB is roughly 9 mm x 9 mm and we keep shrinking and adding new technologies at each manufacturing process node, but it's getting to the point where we can't power the entire chip up at the same time. In the future he expects that only certain parts of the processor will have to be powered up as power is the number one problem for the industry now. There are solutions though and they all point to heterogeneous computing. ARM has produced a new GPU called Mail-T604 that features a new GPU architecture and has performance around 68 GFLOPS of compute power, which is still very good for a 1 Watt part. He also stated that GPUs will continue to be throughput devices and run really well when multiple threads are thrown at them. He also said that benchmarks that show GFLOPS are pointless as the numbers tell you nearly nothing. We have to agree with that statement as GFLOPS don't mean much to consumers. The message from ARM and AMD during this keynote was that a combined and balanced approach, hint an APU, is the proper implementation for now and the future.
Find us on Facebook to discover the faces behind the names!
Follow Me on Twitter!
Top
Post Reply
1 post • Page 1 of 1