Discussions about AMD Processors and overclocking. Need help with that new AMD CPU or not sure which one to buy? Like to void your warranty? This is the place for you! Please keep the topic on Processors only!
Post Reply
6 posts • Page 1 of 1

AMD has been very tight-lipped about their next generation 'Bulldozer' processor and it appears that we might know why. SiSoftware appears to have published some Sandra benchmark numbers on their site that show AMD 'Zambezi' processor benchmark results. The processors are currently shipping to retailers around hte world, so it is highly likely that this is a real leak. 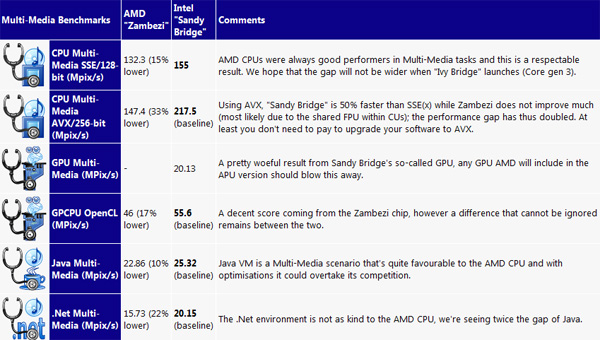 Don't care. It's one benchmark, for all we know SANDRA favors Intel like the new SYSMark. This doesn't include the build cost or the overclocking potential of Zambezi either. I'll hold my judgement for the final product review.
Top

Depends on the piece of software. AMD is providing the cores, the software developers need to figure out how to take advantage of them.
Top

Since the most demanding thing I do with my PC is gaming and since games barely support quad cores, I'm not going to be upgrading in a while. However, if I were to upgrade, I'd probably pick an AMD CPU because of cost. The difference in power usually results in little difference in games. I wish games had better multi-core support for things like physics at least. Would be interesting to see a raytracing benchmark. Eight cores sounds delicious, but there doesn't seem to be many highly parallel tasks to take advantage of them all.
Top

Major_A wrote:Depends on the piece of software. AMD is providing the cores, the software developers need to figure out how to take advantage of them.

Should developers work to make their software better support 8 threads or 16 threads when they could be working on GPGPU support which so far appears to give performance increases that blow away anything a cpu can deliver. In the page linked they say in regards to Quicksync "You'd need 6-times more cores (24 = 4x6) to match the performance in software! Zambezi would need ~8-times more cores (64 = 8x8), so keep an eye for that 8-way Opteron system." 64 bulldozer cores to match quicksync using an HD3000. That is pretty shocking. So maybe the better way to improve performance is to put more tasks on the GPU. Which would work out well for AMD in the long run with their APU strategy.

Also I was reading that AMD's follow up to Llano, Trinity will skip to Piledriver Cores; with AMD even indicating an early 2012 release for it, and that FX Piledriver chips would then be released later next year. Which makes me think this benchmark is probably about right, and that Bulldozer will be disappointing for us home builders with weak core performance compared to Sandybridge.

But it should be interesting in the spring if my predictions turn out to be true as AMD would have a quad core APU outperforming their 8 core FX chip in a lot of stuff, and Intel should repeat this year and have new 4 core Ivy Bridge CPUs that outperform the 6 core Sandybridge-E cpus in a lot of tasks as well.
Core i7 2600k/ ASUS P8Z68-V Z68/ 8gb Corsair Vengeance 1600 Blue/ EVGA Geforce GTX 560ti Maximum Graphics Edition/Windows 7/Antec 300/Antec 650w/LG Blu Combo/Hp 27inch 2710M/Samsung P2770HD

"I think sharing is overrated...and helping others. And what's all this crap I've been hearing about tolerance?"
Top
Post Reply
6 posts • Page 1 of 1