What's the latest word on thermal grease? What are people using and what do they like? Is Artic Silver still considered good stuff or are there better alternatives. I've been using the eVGA Frostbite stuff that came with my motherboard but wonder if it's really as good as they claim. I'm going to be ordering the 1155 mounting bracket for my cooler and can easily add a tube of thermal compound if there's better stuff out there.
Top

I use Noctua NT-H1 Thermal Compound because it came with my cooler. Nothing wrong with artic silver.
Top

Haven't used AS5 in a LONG time. I use GC Extreme on the test system, and my personal rigs.

AS5 takes FOREVER to cure to get the "best" results from it, the ones I listed perform on average 2-3*C better with less cure time from all the tests I have seen. The GC Extreme has NO cure time.

Now if you want to get into the exotic stuff, Indigo Extreme. http://indigo-xtreme.com/
"The democracy will cease to exist when you take away from those who are willing to work and give to those who would not."
-Thomas Jefferson
Top

Hi, this is my first post on Legit Reviews.

My Dad (Scott Loves Dogs) used the Indigo Xtreme "Engineered Thermal Interface" when he recently upgraded his system (see his signature) from an Intel E6600, OC'd to 3.2GHz, to an X6800. When installing the Indigo Xtreme, there is a "reflow" procedure that involves turning off all the cooling system, and the BIOS protective mechanisms. The motherboard is placed horizontal, not close, but horizontal. You then run a temp monitor that will graph, Speedfan will do, in graphing mode, and a stress program, Prime 95 will work. The C{U should be heated up to about 90 deg. C, after a few, or several, seconds the temp. will drop, then climb back up to about 90 deg. C. When the temp stabilizes at 90, the Indigo Xtreme has reflowed and the computer can be turned off and set back to normal.

As soon as Dad started up Prime95, his computer let out a loud SNAP that sounded like the CPU had popped from severe overheat and shut off. It never did the proper reflow graph. It did start up after a cooling off period, though. He is using it now, OC'd to 3.4GHZ, but he says the temps are no better than the Shin-Itsu X23-7783D that he used for a few days on the X6800 to play with it before permanent installation. In fact, the idle temps are higher than the E6600 w/Shin-Itsu, at 3.2GHz he removed.

He is going to email Indigo Xtreme about the problem he encountered, and he or I will post the response if you like.

Meanwhile, he says the Shin-Itsu X23-7783D seems to test far better than all of the other compounds, and very close to the Indigo Xtreme. Depending on the response from Indigo, he may remove the Xtreme from his computer and reinstall with the Shin-Itsu. Here is a review of the Indigo and Shin-Itsu stuff at Skinneelabs, it is pretty thorough: http://skinneelabs.com/thermal-paste-v1-1/
Top

Well that doesn't sound good at all! I think I'll avoid that. Anything that makes a snapping sound causes me some "concern".

The Gelid GC Extreme is only $10 so I'll probably order that along with the 1155 bracket for my waterblock. Still debating on swapping it out.
Top

Welcome to the forums.

I found this review. I like the fact they are using some levity with their writing also. Hope this helps.
http://www.hardwaresecrets.com/article/ ... -2011/1445
Top

To be honest, most are within 2-3 degrees of each other which is trivial unless your are hardcore OC'ing. I'd be more concerned with application technique than the brand (obviously some brands are duds though).
Joe
Top

I also agree with FZ1. I also have thermal grease from dow corning TC-1996 compound intel. It came with my 980x cpu. I would be happy to send you the Noctua NT-H1 or the dow corning for free.
Top

FZ1 wrote:To be honest, most are within 2-3 degrees of each other which is trivial unless your are hardcore OC'ing. I'd be more concerned with application technique than the brand (obviously some brands are duds though).

Technique you say? I've looked at several YouTube videos. The concensus I could find seemed to be use a dallop about the size of a grain of uncooked rice, which is what I did. The first time I applied it to this proc I tried the "thin layer" method using a credit card as a spreader to apply an extremely thin layer.
Top

I highly doubt that the thermal grease is the issue here. I'm sure once you get the 1155 mounting bracket you will won't have any issues no matter what grease you use. bubba is right about curing times and also some thermal grease is very conductive. The Noctua is not one of them.
Top

The pea size dot works for thin pastes, thicker ones like the GC Extreme you need to butter the CPU with the card method.

Too much is as bad, if not worse, as not enough. Too much it can ooze out the side making a real mess, compounded if its conductive. Best bet is to apply as directed by the brand maker, seat the cooler, and pull it to see how the spread is.

The Indigo is a liquid metal, not really a paste, end up with a custom fit thermal shim basically. There is a bit of a process to get it installed, not like paste that is a "squirt and run" thus the exotic label. Some have reported over 5*C lower temps over most pastes.

Here is a shot of indigo pulled off a chip after installing. 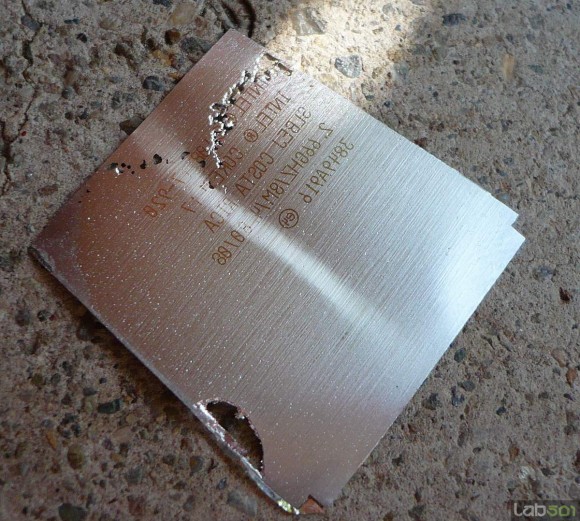 Wow!! That's crazy! I guess the bubbles are from where there wasn't enough of the compound on the proc at the time. Looks like it pulled the ink right of the processor die!
Top

Not ink, laser etch.
"The democracy will cease to exist when you take away from those who are willing to work and give to those who would not."
-Thomas Jefferson
Top

I see you haven't read my post from before, because I posted a link to the best TIM available (it can be bought from other vendors as well):
IC DIAMOND 7 CARAT: http://www.amazon.com/DIAMOND-CARAT-GRA ... ALBEHZXRUK

I just use Ceramique, 1x 25gm tube and it lasts forever; IMO the other "speciallty" or small tubes of TIM are pointless.
I prefer to buy one tube and be done with it.
www.arcticsilver.com/cmq2.html

My guess is that there's really no difference in the higher-end TIMs. A few degrees difference is more likely due to methodology variances. Not sure why they tested IC Diamond twice, 7 Carat and 24 Carat are different sizes of the same product. They also got a better result with the larger tube, so we can deduce that the delta would be lower for tests done at higher room temperatures, all else being the same.

I've also read reports that the IC Diamond is abrasive enough to remove markings on the CPU, which will void the warranty.
No one would talk much in society, if he knew how often he misunderstands others. - Johann Wolfgang Von Goethe (1749-1832)
Top

I'm using the MX-4 now and is very good in performance.

There are actually many good thermal compound out there. Arctic Silver 5 is one of them.
Top
Post Reply
19 posts • Page 1 of 1