So I finally got my new APU system "running" and I have some questions.

1. What is a good "working" temperature monitoring program for the APUs?
I'm currently "using" CoreTemp and HWMonitor. CoreTemp shows ridiculously off temperatures, so it's not very helpful. I mean, -2*C?? 6*C to 13*C? Come on!

HWMonitor seems a little better. For the Core temperatures, they are off as well - like CoreTemp, but under the "Temperatures" tab I get the following

2. Any tips on overclocking these chips?

It's a little different than the "normal" CPUs, but I think I'm getting my way around the BIOS.

Chipset/LAN/USB Drivers: Using the latest from Gigabyte's website
GPU drivers: 12.2 with CAP1
BIOS: F4 (F5a is available but it's a beta BIOS...seeminly for the upcoming lower TDP A6/A8's)

See what HWiNFO64 reports. If it's wrong contact HWiNFO and they'll look into the problem. Alternatively you can try AIDA64 (though it costs money). I've had a few issues with AIDA64 in the past and posted them in their forums. They were usually addressed in the next beta update.

If I had to guess a reason why your scores are different off the top of my head is Cool N Quiet. Try disabling it for a few runs and see if your scores come up. The APUs are also sensitive to faster RAM, faster RAM is better scores. If you feel comfortable then try overclocking your RAM. I also noticed in your scores comparison that your CPU is roughly 150MHz slower. That too could be affecting the overall score.
Top

It could be that I'm using 1600MHz RAM. seems that any frequency RAM shows up at 667MHz in the socre deatail so...people could be uisng 2133MHz for all I know.

I''ll try out the programs you suggested, and see how things turn out. Thanks agian.

There was as pretty simple way to cheat 3DMark back in the day. It was good for a few hundred points. Adjust the Mipmap to High Performance, AMD defaults to High Quality.

Here's what nVidia's option looks like in the control panel. 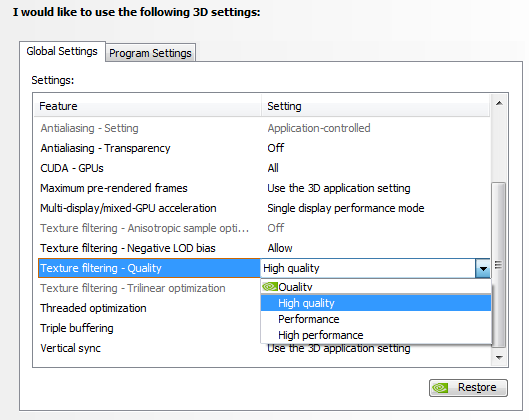 What do your temps look like using Gigabyte's EasyTune 6? If they are wrong there then you might want to shoot Gigabyte an email. If they appear to be correct use that data to send to HWiNFO or AIDA if you choose so.
Top

Heatsink that is cool to the touch sounds scary, does it have proper contact with the APU? Did you check what temps BIOS shows?
Top

What I said about the heatsink...it isn't freezing cold. With the way the aluminum fins array is designed, and me having the CPU fan running at 100%, I was most likely feeling the cool air on my hands. When I touch the heatsink, I'm actually touching the tips of all the fins. Remember, the stock heatsink for the APUs look like this http://www.jagatreview.com/wp-content/u ... _Base1.jpg.

I'll run a bench with 3D Mark Vantage and see what kind of score I get, and compare to the score obtained from the A6-3650 here on Legit reviews.

Haha, EasyTune6 is showing the CPU temperature readings just like the other programs. It's saying 10*C/11*C as I type this. System temperature agrees with the BIOS, though.

I really hope all this...weirdness...is from a defective motherboard or APU...

EDIT: Fired up 3D mark Vanatage to install it, and in easyTune6, the CPU temperature jumped up to ~25*C, even 33*C. As soon as install is complete, it's lowered down to 18*C, and slowly dropping back.

While running 3D Mark Vanatge, the CPU temp (looking at Easytune) has jumped up to even 44*C. I guess this goes to show that the idle temperatures or low load temperatures are wonky, but moderate to high loads it works okay.

I've the same problem. My system is: Gigabyte GA-A75-UD4H, AMD A8-3870 APU. I don't know the exact explanation but I've the soluton of this problem. The BIOS shows about 20-22°C for the CPU temp, and about 25-27°C for the motherboard (system) temp. I use Win7 x64 SP1 with the last updates and the last drivers for the Gigabíte motherboard. I use Aida64, the latest version. This software shows 58-61°C for the CPU, -2,-1,0,3,12,15°C for the CPU cores and for the GPU diode, and 27-29°C for the mobo. There are three temp sensors in my system. I don't know whether these consist of the mobo or the CPU (I think for the mobo.). But for these three sensors, there are two optoins (for each one) to choose: thermistor or diode mode. The default values (by the Win7 or by the mobo drivers, I don't know) are thermistor. I don't know why or what's the difference between thermistor and diode mode (I don't have much time to search for these...). Let change the CPU's temp sesnor to diode, and the hardware monitor softwares (let it be the Aida64 or HardwareMonitor or anything else) will show the right temp values of the CPU (which temp showed in the BIOS). You have to do this change only once, the system will remember it. (I don't know why or how it works.) You can do this change eg. in Speedfan: Readings -> Configure -> Advanced -> Chip: IT8720F... on ISA -> choose the CPU's temp sensor and change it's value from thermistor to diode.

The joke is that if I change the mobo system's sensor temp from the default thermistor to diode, the system temp will change from 25-29 °C to 110-130°C which value is horrible. And the system fan will speed up to a noisy rpm. But when the CPU's temp sensor is set to thermistor mode and so the CPU's temp is at about 58-60°C, the CPU's fan rpm is the same as when it is in diode mode with about 22-26°C. In both cases, the SmartFan Control (or how it's named..) is Enabled in BIOS.

I think, the SpeedFan can do changes only in the mobo (in the BIOS), and I think the CPU cores temp and the GPU diode temp are not from the mobo, but from the CPU/APU inside. It's the same with the HDD's temp. That's why these can't be changed via the way aobve.

Unfortunately, in Aida64 or in HardwareMonitor I was unable to do this change (from thermistor to diode). Why??...

Ahh..
And I have the third temp sensor in hte mobo. Do you know what temperature is it? Not the GPU diode, not the cores, not the HDD. I have no extra VideoCard, only the APU. This temp is at about 9,10,...20°C.

Contact AIDA64 with what you just said here. Like I said I've had a few issues in the past and they usually address the problem in the next one or two beta updates.
http://forums.aida64.com/index.php?/for ... g-reports/
Top
Post Reply
8 posts • Page 1 of 1