Want to show off that smoking system or your latest creation?
Post Reply
28 posts

Well, time has flown by and my PC has started to show signs of age as it was built back in 2009. Like many of you I was waiting on Intel to come out with Ivy Bridge before I updated my personal system.

So say goodbye to my 2009 creation. The Intel X58 platform has worked great over the past three years, but it is time to move on to some more power efficient and smaller. I've done loud, Lighted, big, water cooled and pretty much everything you can imagine with the exception of small. The goal of this project was to go small! I've spent the past month gathering parts to build a Mini ITX system that would be able to run the Intel Core i7-3770K processor and the NVIDIA GeForce GTX 680 video card. I also wanted to run water cooling and be able to fit all this inside a Mini-ITX chassis. My part list after doing my research was a bit pricy, but this build will be epic:

All the parts are here and I'm going to be building this up over the weekend if all goes as planned. I got some launch articles to do for next week that just arrived today though... so much to do! 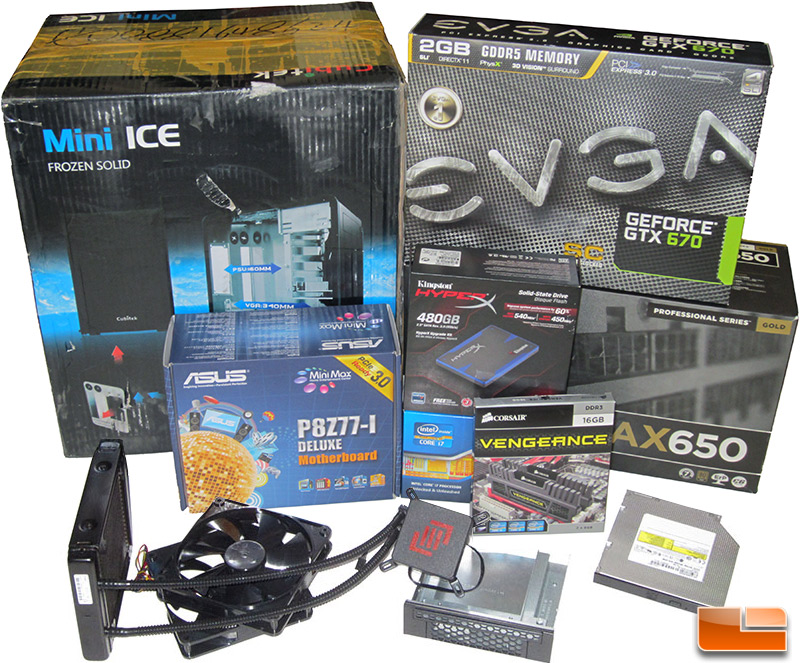 ASUS Board....Niiiiiice!!
Just a little puppy trying to make it in a big digital world.
Top

Very nice system. Hurry up and get this thing put together!!

Well, I measured everything and built this whole design around the CoolIT Eco II 140MM water cooler as I wanted a water cooled Mini-ITX system and ran into the first two issues.

1) The push/pull dual fan configuration for the water cooler fits, but I forgot to factor in the PSU and the second fan won't fit do to the PSU being in the way. Looks like I am limited to a single fan.

2) The power supply location makes fitting the Water Cooler super tough as the stiff plastic tubing is not playing nice with the power supply or chassis. 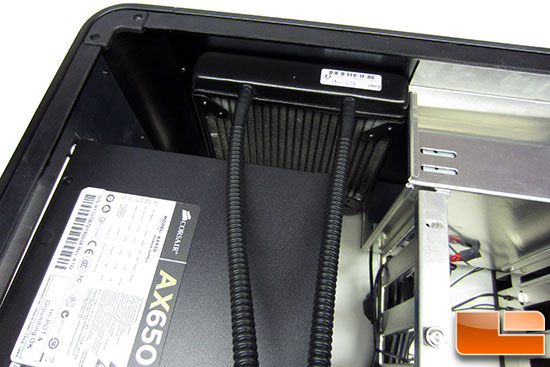 I can run the hoses above the power supply, but they aren't long enough to bend around the PSU and attach to the socket. Flipping it 180 degrees runs the tubing straight into the motherboard. 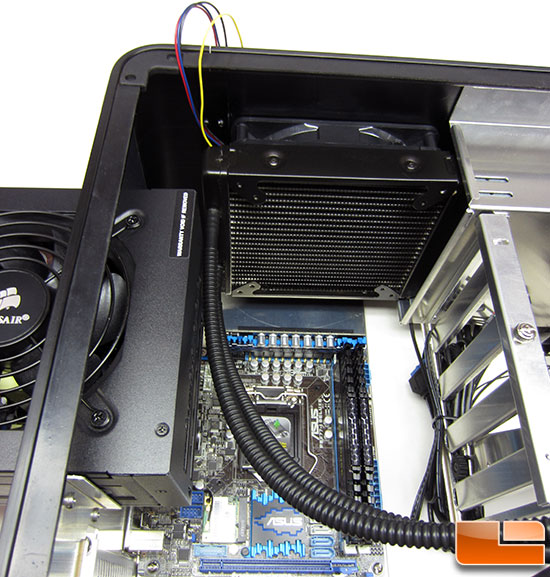 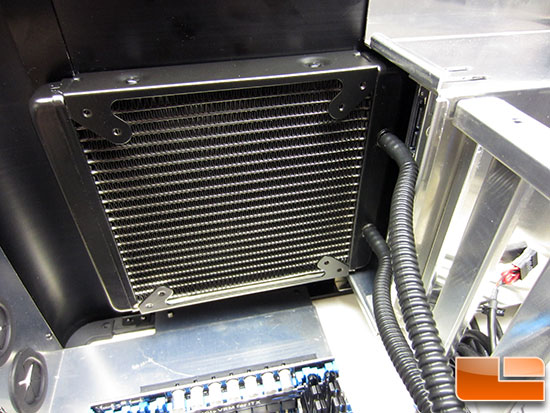 Hum, I have screws in the radiator... Nothing that a dremel can't fix right?
Find us on Facebook to discover the faces behind the names!
Follow Me on Twitter!
Top 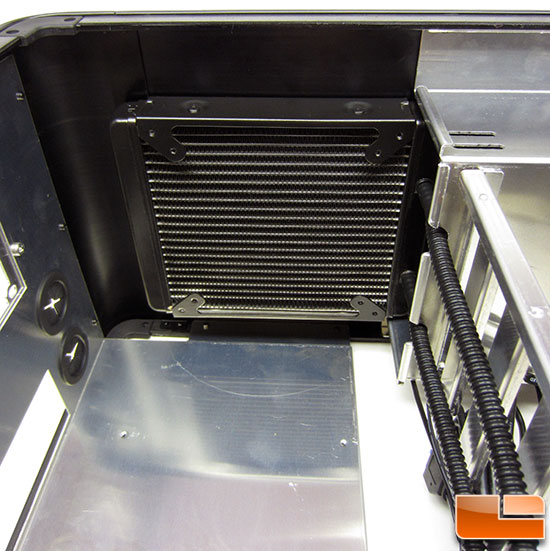 Damn man you made that circular cut with a Dremel? If so kudos to you. I can't cut a straight line with a Dremel. Looks good now keep the pictures coming.
Top

Yeah, it wasn't too bad to get it cut out as I basicaly just sanded it. I found that works better for curves like this. It ate up a sanding band for each hole (linky), which is what I expected. 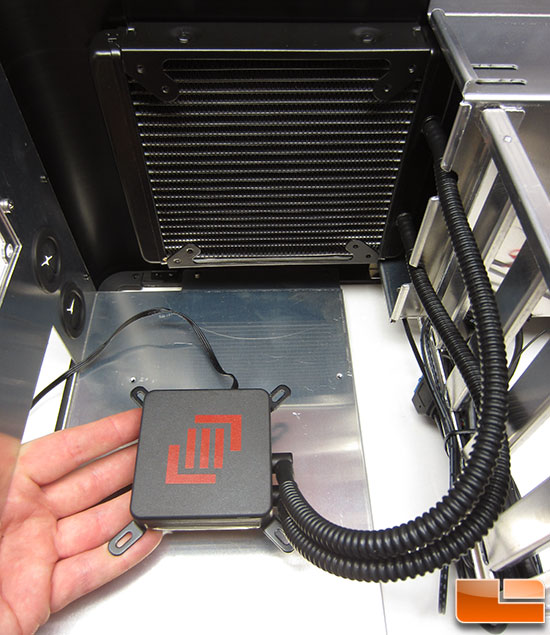 It looks like the water lines will tun down the hard drive cage and then turn and allow the water block and pump to fit flat against the mobo. The question now is will the power cable and SATA cables fit on the optical drive and will the water lines run over the top of the Corsair Vengeance memoty kit with the small heat spreaders. 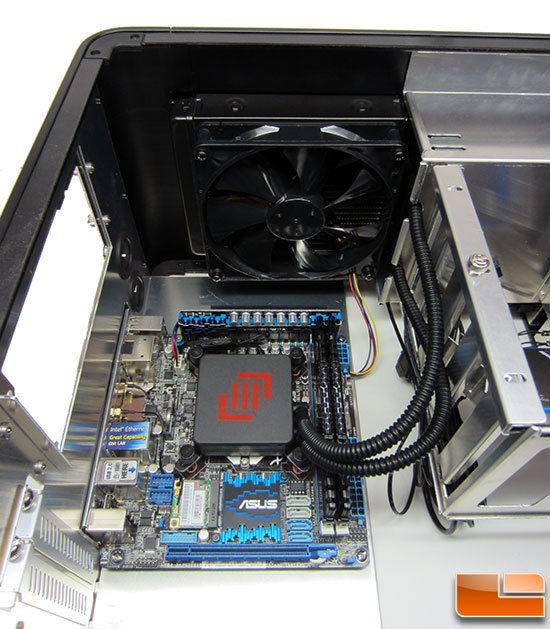 It looks like the lines clear the memory and a quick test fit shows the Slimeline SATA Adapter touching the water hose... TIGHT TIGHT fit, but it looks like all the planning paid off and it will all work.
Find us on Facebook to discover the faces behind the names!
Follow Me on Twitter!
Top

Just because i am curious - Why didnt you go with a blu-ray drive? This little thing would make a nice little player. I imagine you would have this hooked to a nice big screen HDTV anyway...??

I'm pretty sure this is going to be his office computer.
Top

This is going to be my daily driver rig, so no Blu-Ray needed. It's going to be running a multi-monitor setup for work and then light gaming from time to time.

I could get the Samsung 8x Slim DVD Burner for under $30 and the lowest cost BluRay player was just under $135. Wasn't worth the extra $105 to me. Plus I couldn't find the right 5.25" bay adapter that had a slot load drive slit and the 3.5" drive bay under it for my media reader. I also got many blu-ray drives in various notebooks, so if I get bored or need one I'll go grab one and change it out! ;)

Getting closer to firing this bad boy up! 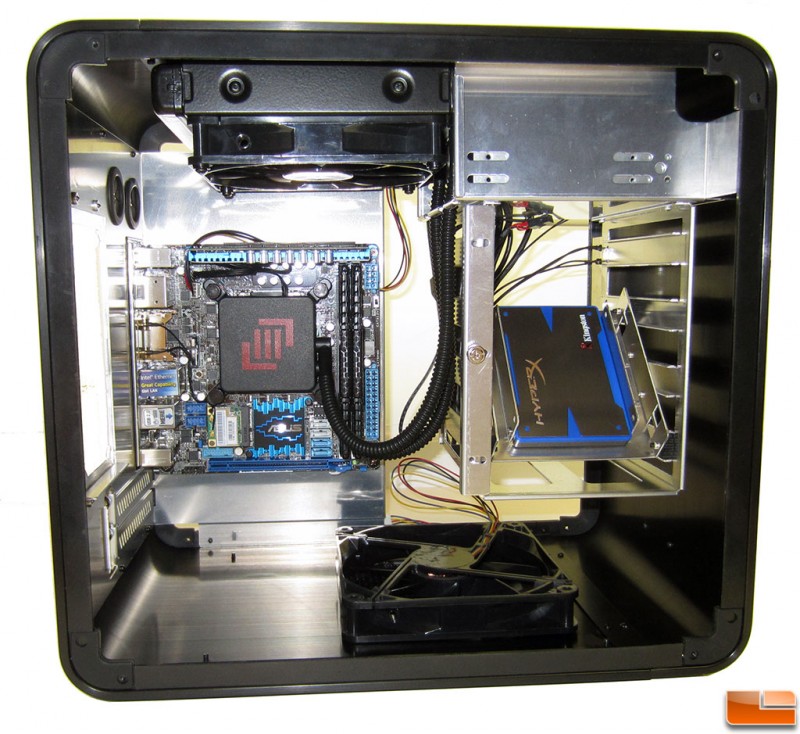 Oh and for the record... There is no place to run or hide wires in this case. Good thing is doesn't have any windows on the side panels!
Find us on Facebook to discover the faces behind the names!
Follow Me on Twitter!
Top

Man that motherboard is tiny. The waterblock/pump really puts it into perspective. I really like this...

light gaming from time to time

Yet you still put a GTX 680 in it. Guess you have the mentality that it's bad to bring a knife to a gun fight.
Top 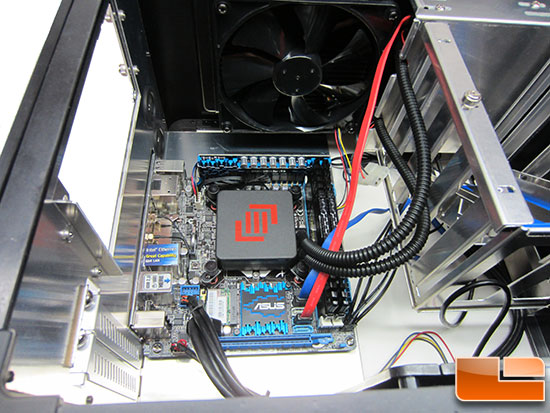 Cubitek looks like they were sleeping on the job though... 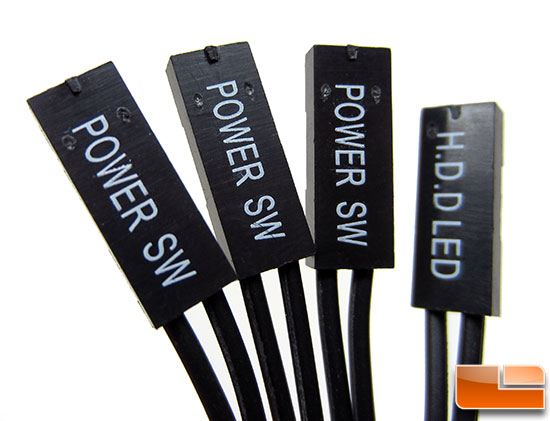 Three of the wired were labeled power switch and had no other markings to make them distinguishable. Good thing I already had them zip tied... Never seen a case company do that in all my years of building PC's.
Find us on Facebook to discover the faces behind the names!
Follow Me on Twitter!
Top

LOL, good thing for Cubitek most people using that case know what wires go to the correct connection. It would've been even funnier if they all said POWER SW.
Top

Looks like I'm building this at the right time... My WD 2TB Black Hard Drive just started knocking. I was going to move it over to this build, but I guess not. 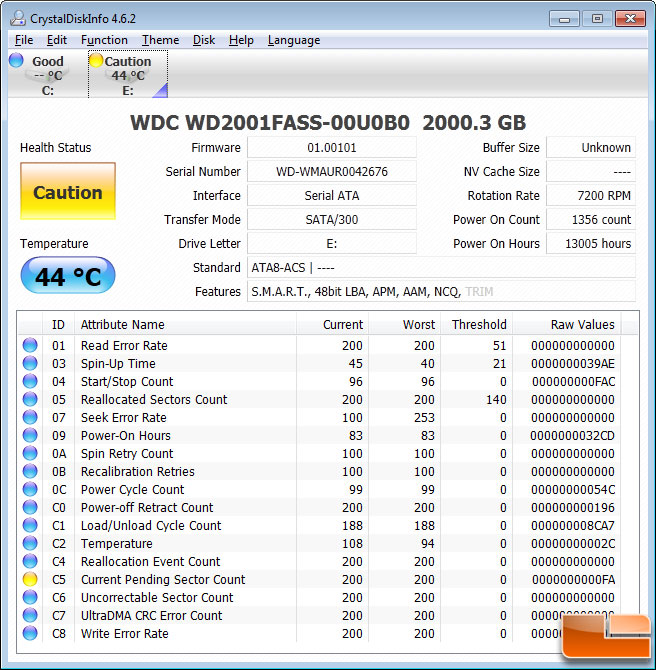 Nice! Interested in seeing how this turns out. How much did the case run you? Any gripes about it other than having to cut to route the tubing?
Top

It has actually gone down.

It was $325.99 in September 2009. You can get the same drive right now for $154.99 shipped. I think you are looking at the newer SATA III version.
Find us on Facebook to discover the faces behind the names!
Follow Me on Twitter!
Top

Pretty much done and I'm loving this thing. 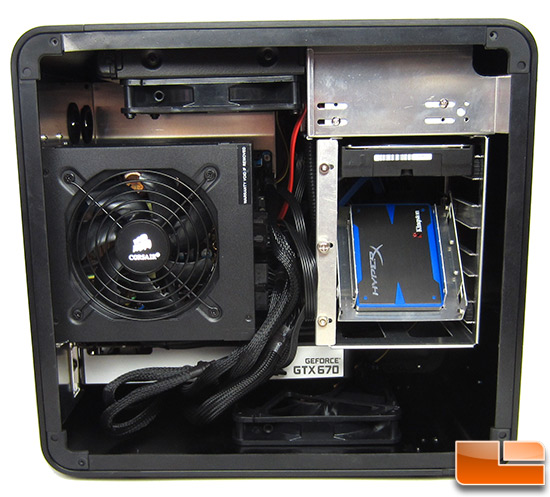 You can read the full review on this case here - http://legitreviews.com/article/1922/1/
Find us on Facebook to discover the faces behind the names!
Follow Me on Twitter!
Top

Looks good. You can tell you're getting older too. No flashy lights, no obnoxious case fans, and nothing over-the-top. My philosophy for the last few builds has been K.I.S.S. (Keep It Simple Stupid).
Top
Post Reply
28 posts