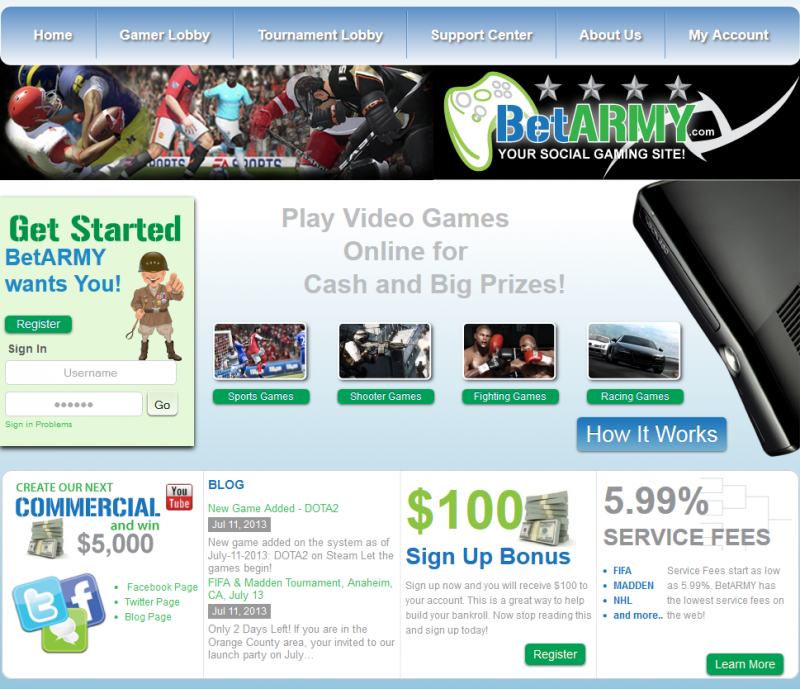 Aliso Viejo, CA, Jul. 11, 2012 – BetARMY, the new standard in social gaming, made an official launch for online novice and competitive gamers. The new BetARMY platform is built on challenging social gamers to show off their competitive style by playing the games they want and when they want. Gamers of all skill levels will use BetArmy’s sophisticated feedback reputation management system to challenge opponents from around the world via a head to head match or through social online tournaments. BetArmy will be hosting events and an online commercial contest to celebrate the launch of the new platform.

To let the games begin, BetArmy will be hosting its first onsite event at the Concourse Bowl in Anaheim, CA on July 13 from 12 pm – 7 pm PST. Gamers wanting to show their skills for Fifa® 2013 and Madden® 2013 are encouraged to play. There is a $20 buy in for this onsite tournament (rules and regulations apply).

BetARMY was designed to give gamers the ability to compete with games of skill in a community where feedback was not only important, but critical to the success of both opponents’ overall rating. The BetARMY system allows gamers to play an open amount of genres, like sports, racing, fighting and shooting and on platforms such as PlayStation®3, Microsoft Xbox® 360, Steam, Origin, Battle.net, mobile, PC and many more. The wide variety of games that can be played gives an overall more positive gaming experience. BetARMY’s secure transactions give peace of mind to users and its service fees are among the lowest on the web.


“Like us, gamers are competitive and we wanted to provide an experience were gamers could have fun, stay competitive, yet not break the bank with service fees, said John Jerney, president of BetARMY. “We kept hearing that gamers wanted a place to go where they could compete and play what they wanted and when and have a wider variety of games to choose from. This coupled with being able to play on a plethora of platforms gives our customers the positive experience they are looking for.”


In conjunction with the launch of BetARMY’s social gaming site, the company has launched a “Create Our Next Commercial” contest, whereby the first BetARMY video to reach 500,000 views on YouTube will win $5,000 cash[1]. BetARMY also will be supporting online tournaments for teams where users can create their own tournament brackets.

BetARMY began as an idea from 3 entrepreneurs with experience in different aspects of gaming, social networking, and business. We combine the best ideas from our different experiences to create a community that enables users a safe and effective way to interact and compete against each other.


Some of the websites we use as inspiration include various gaming websites. Many games exist but we are limited by the lack of a platform to compete with others in the games we love. We were able to compete with our peers at certain games such as online poker, but found that this game has frustrating flaws in that there is some element of luck involved. In our search to compete online in pure games of skill, we were unsuccessful so we started to turn the wheels of the Betarmy.com idea.


In our effort to develop a safe environment for gamers to compete against each other, our team adopted some proven concepts from many other websites such as popular auction sites. We quickly learned the value of feedback and how it can inherently regulate an online community. The concept of feedback will protect our users just as it protects millions of users that trade goods and/or services on successful multi-national websites.


To build a community of gamers, another concept we applied to BetARMY was the fast growing and popular concept of social networking. There are many successful social networking websites to provide a guide for the best features and ways to connect everyone. We implemented some of the most effective networking tools such as friends, statistics, private messages, a wall, and feedback just to name a few.