Have you been one of the many out there that have been looking for a USB to NVMe drive adapter that will allow you to use whatever brand SSD you want and is fully bus powered? The new MyDigitalSSD M2X Portable USB 3.1 Gen 2 M.2 PCI Express SSD External Enclosure Adapter might be what you need. Priced at $39.99 shipped, this inexpensive enclosure could be a life saver for repair shops that work don’t want to shut down a PC each and every time they need to access a customers M.2 drive. You could also use this diskless enclosure to make your very own portable SSD drive! How on earth were you able to slide the drive, with attached thermal interface material, into the case?

I've found that impossible if I want the interface material to be utilized. Double sided sticky and sliding don't mix.
Top

brentsg wrote:How on earth were you able to slide the drive, with attached thermal interface material, into the case?

I've found that impossible if I want the interface material to be utilized. Double sided sticky and sliding don't mix.

I might be dead wrong on how I do this, but I'll risk looking like an idiot and sharing what I do.

On the top of double sided thermal pads there is a thin piece of film and on the bottom thick piece of plastic. I remove the thicker plastic piece and place that 'naked' part of the pad across the SSD (trying to cover the controller and the power components). Some say only to cover the controller as TLC NAND likes to run hot. I then leave the thinner film on top and use that lessen the friction between the case and the pad. It still seems to transfer heat well this way.


I just took a picture and before I did... I removed the thin film and there was no way it was sliding in easily. The only trick I see to taking that off is to mash the pad flat and slide it in before it expands. Getting it out will be fun though. 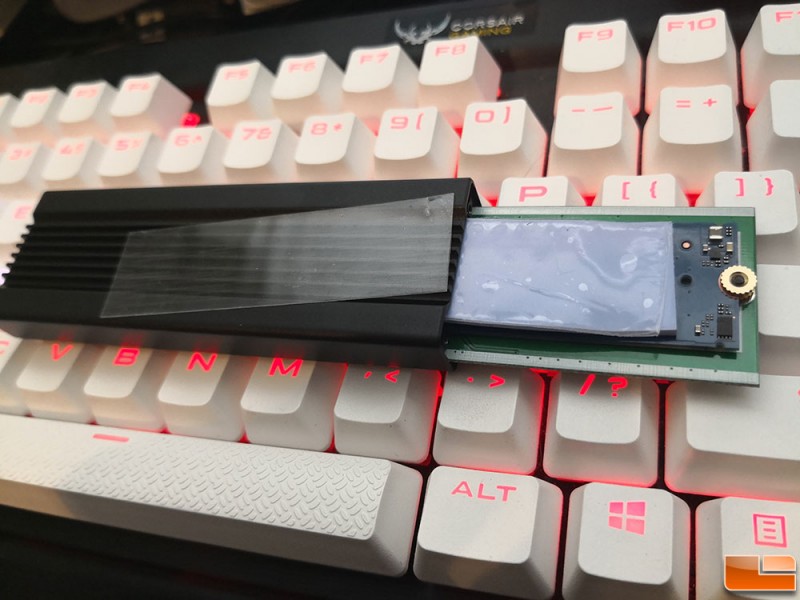 Also, I shared this post with my contact over at MyDigitalSSD and they just went and tried it... This is what they said.


We just did it and it worked fine. Its is a little tight but it needs to be so it is tight against the metal and the SSD. Just gently slide it in there.

I'll keep the film on there as I think after 10+ drives being in and out it will hold up better.
Find us on Facebook to discover the faces behind the names!
Follow Me on Twitter!
Top

Your keyboard is really clean. I should throw mine in a dishwasher lol

Seems after a week of use it can look like I killed someone with it, wash it, another week and death is all over it again. Maybe I am just a dirty hippie

Maybe my keyboard is possessed by Chucky

haha, and I almost didn't post that since it was so dirty (to me).

Those caps haven't been cleaned since Nov 2017 when I posted the review on them, so I guess I have clean hands

I can't believe that was almost a year ago... Damn, time has flown by.
Find us on Facebook to discover the faces behind the names!
Follow Me on Twitter!
Top
Post Reply
5 posts • Page 1 of 1