You can find all the latest computer hardware press releases in here.
Post Reply
11 posts • Page 1 of 1 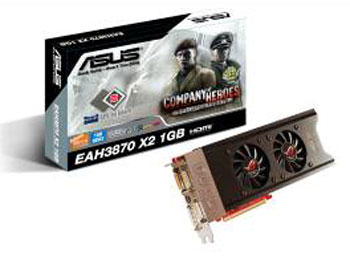 A Genuine ASUS Design
The new EAH3870X2 series is the first one in the world to come equipped with 1GB of the fastest 0.8ns DDR3 on-board memory. The unique combination of high memory capacity and specially sorted memory speed means the ASUS cards are capable of processing the most complex graphics without delay at the highest resolution and with maximum quality settings to deliver the ultimate visual realism.

Panoramic PC gaming is now possible thanks to the integration of two additional DVI outputs, to allow a maximum of four displays. To ensure stability and to allow maximum overclocking, the new ASUS EAH3870X2 utilizes a specially designed dual fan sink that effectively dissipates heat from both GPUs, resulting in significant performance reliability enhancement compared to the reference design.

Rock Solid Quality from ASUS
The legendary ASUS engineering promises not only top notch performance, but also industry leading quality. With the EMI shield, up to 10dB EMI interference can be reduced to provide stable signals. The temperature of the new DIP Spring Chokes is typically 5~10°C lower than the traditional Toroidal Coil Chokes used in the reference design, and the Japanese polymer capacitors lower power loss to provide further stability. The ASUS proprietary implementations in the EAH3870X2 series mean users can enjoy maximum performance with uncompromised reliability.

Exclusive ASUS GamerOSD for Versatile Graphics Usage
The ASUS EAH3870X2 series features the exclusive ASUS GamerOSD utility that unleashes the true power of ASUS graphics cards. This feature allows GPU overclocking from on-screen display during game play – allowing users real-time performance upgrades when they need them the most. Additionally, it provides users with the option to record live gaming action or live broadcasting over the Internet.

ASUS Smart Doctor
ASUS SmartDoctor is a group of special tools designed to help users make the most of their ASUS graphics cards. It monitors the fan RPM, AGP power level, GPU and RAM temperatures, and has a slide bar for simple manual overclocking. Furthermore, the embedded HyperDrive and SmartCooling technology dynamically overclocks and changes fan speeds for better performance and convenience. With its comprehensive hardware monitoring functions, it provides the best protection against damages and best performance when overclocking.

About ASUS
ASUS is a world class leader in design and manufacture of 3C total solutions. With a global staff of more than 100,000 and an award-winning R&D design team, BusinessWeek’s “InfoTech 100”has ranked ASUS among the top 100 technology companies in the world for ten straight years. In 2006, ASUS reported annual revenue of $17.4 billion dollars and shipped over 55 million motherboards – representing 1 in 3 PCs sold in the world during that year. With its innovative product designs, legendary quality and superb customer support, ASUS took home the honor from Wall Street Asia as the Number 1 Manufacturer in Quality and Services in 2006.

I like the reference card better as it takes the hot air out of the case.
Over clock it till it burns.......

Generally speaking, I've avoided Crossfire and SLi solutions in the past. Something about only being able to get a 40-60% increase in performance, when I almost never have the spendable cash for 2 of any card. Makes it untenable, if not unattractive, to even consider multi-GPU. The HD 3870 X2 however seems to work extremely well. I still can't really afford to buy one given my current financial circumstances. But maybe none of you will think the less of me for "dreaming" about owning one?

Although I would rather have a cooler setup that blows hot air out of the case, the ability to have four monitors running at once probably makes this worth it. Too bad I can barely afford one monitor

first off I really like the idea of 4 DVI ports thats just awesome but what Im wondering is do you maintain the performance when playing a game if other dvi ports are in use?
second I love the cooler, this looks like it would do a much better job at keeping this graphics card cool aside from GeCube orb cooler on their 3870x2 overall I love this card.
Top

The card looks and performs great. However, the fact that I would have to bend over backwards to watercool it is a HUGE (decisive) turn off for me. If I didn't water cool, then I would be all over it (if I could afford it).

agreed the water cooling blocks for these are nuts, like EK's 3870x2 blocks around like $160+, really awesome looking blocks and Im sure preform amazing but man what a cost, time to break the piggy bank
Top

thats true too unless AMD/ATI plans to continue to use this exact same circuitry layout on all their upcoming dual GPU cards, and hey back at you, Maku