Looks like I get to play with the bootloader.The two O/Ss that I want to migrate (Win7 and Win8) were set up as dual-boot on two primary partitions on the same platter drive. The Win7 partition cloned over to the first drive using EASEUS Todo Free Disk Copy, but at boot also still offers the dual-boot for the Win8 install which is not on that drive so if I accidentally choose that option it will try to "repair" it which just puts it in a loop. Plus it only created a partition the same size as the old one so now there is 9.45GB of unallocated space I need to merge into the newly cloned/created one. Today I will try to clone the Win8 install to the 2nd SSD, and figure out a way to give each SSD/OS its own standalone bootloader so I can just go to each one based on drive selection in the bios. I'm only using Win8 to dabble with in order to learn it, my wife doesn't use it at all so I don't want to have that dual-option at every start-up. I assume I will have to redo the bootloader on the Win7 cloned SSD to remove the Win8 option, and then create a new bootloader on the Win8 SSD that will load it like normal if that drive is selected to boot to first in my bios. Any easy way to do this? I'm all about the EZ...

So far I just copied over the two partitions using EASEUS to the two separate SSDs, then used my Win7 disk to "recover" the existing OS's on the SSDs so that is what it offers me upon boot,

as a dual-boot similar to the old one only spanning 2 drives instead of 2 partitions on one drive. In the system, it shows the old Windows 7 install but lists it as basically unfindable. No biggie, but makes everything appear untidy. I will probably wipe both drives and try again, I still have the originals on the platter drive.
I have come to the conclusion that "FaceBook" should be renamed "FacePalm"

Have you tried http://clonezilla.org/
Top

No I have not tried that one, will it allow me to separate the Operating Systems on two partitions from a dual-boot configuration on one platter drive to two standalone Operating Systems on two separate SSDs so I can either create a separate bootloader pointing to each standalone or use the computer bios/Fkey to boot to whichever O/S I want to use at any given time? That is my ultimate goal and is what I am doing currently with my main box--I like that setup better because if I have to I can take either drive out completely and the other one will boot and function without crying for its mate. Thanks Ken for your reply and interest!
I have come to the conclusion that "FaceBook" should be renamed "FacePalm"

I've never heard of anybody splitting it like you're trying.

What you might be able to do is clone the drive as it is, and then edit the main boot loader to remove the OS boot choice you want, and delete the partition that it was on? Might work for the primary OS/partition but doubtful for the secondary...
Top

Hmmm that may be doable, the one I am really worried about is protecting the Win 7 install anyway, that is the one that has a limited number of re-activations. The Win 8 was the second install, did it write anything to the boot loader of the original Win7 install that would make Win7 cry for it if I did delete it from the bootloader? Thanks for your input.

PS since I have been playing around with this for a while and have tried two or three times, should I do something special to the SSDs like complete overwrites/wipes to regain performance, or just allow the clone/migration software to do its thing by reformatting and copying/cloning?

PPSS Another thing that may complicate my process it that when I installed Windows 7 the first time I had partitioned the platter drive using a partition manager and installed to the already formatted partition rather than letting Windows do all the work, so there is not a 100MB partition that Windows normally creates when doing a fresh install. Will that make a difference in where my bootloader is found or how it is structured?
I have come to the conclusion that "FaceBook" should be renamed "FacePalm"

If transferring to SSD, most of those companies have drive transfer utilities too move your install from old drive to new SSD.

Try the drive transfer, then image the SSD for backup. ???
"The democracy will cease to exist when you take away from those who are willing to work and give to those who would not."
-Thomas Jefferson
Top

This is where I stand. I gave up on swapping the installs from 785 chipset board to my 890 chipset board, although they would boot they cried to be re-activated and the only way to get around that was cracked-type loaders and I didn't want to do that since I am using a valid key, just one with limited re-installs/re-activations. So this thread is about taking the 640GB SATAIII platter drive from the 890 board that has Windows 7 Ultimate on the C: partition and Windows 8 Media Center on the D: partition in a dual-boot setup (Win 8 installed second) and data on a third primary partition and transferring/cloning the Operating System partitions to two separate SSDs, then just making the platter drive one big data drive for storage.

This is what has been accomplished so far:

and it is now set to look for Win7 on the 1st SSD and Win8 on the 2nd SSD rather than separate partitions on the same drive and will boot to either depending on which one I choose at startup, with Win7 set as the default.

I didn't like the "(recovered)" after the listings so I used EasyBCD editor to edit the names and remove the word from the titles, as well as taking the countdown timer down to 10 seconds from 30 seconds (I am thinking of making that 5 seconds, I dunno yet). This at least cleans up my GUI so it doesn't look so hodgepodge, although I think somewhere there is still some page that will show what I had written earlier about the previous Win7 install being missing and the "new" Win7 and Win8 installs being "recovered". Oh well, I guess I can live with that for now, out of sight out of mind.

I would have really liked to have been able to make the Win8 Media Center install on the 2nd SSD a standalone like I have it on the 785 box (on that box I installed Win7 on the SSD I won, unplugged it and then installed Win8 on a 320GB platter drive, and then plugged the SSD back in so I can boot to whichever OS I want to using the boot order Fkey hotkey as my computer boots and if I do ever have a problem with one it won't fubar the other. I did experiment by unplugging the 2nd SSD Win8 drive on the 890 board and although it shows up in the bootloader if I don't click on it then it doesn't do anything and will load to Win7 after the 10 second countdown so I'm assuming if I edit the Win8 line out of the bootloader using either msconfig or EasyBCD then the Win7 install on the 1st SSD can standalone and safe (paramount!). Is that a correct assumption? I don't want to delete the Win8 entry in the Win7 bootloader if it will fubar the Win7 loader and make it cry for the Win8 install again...

When I tried the same thing by unplugging the 1st SSD and just trying to boot to the 2nd SSD Win8 install, I get the error message "ntloader is missing" which although it is a throwback to WinXP could also be a generic message from my bios saying the chain of boot command is broken. I think it is because the bootloader is all on the Win7 drive so even though the Win8 O/S files are on the 2nd SSD the "keys" to start Win8 are in the Win7 bootloader on the 1st SSD, correct? Would I be able to somehow copy over, repair, or "create" a bootloader for the Win8 install to enable it to be a standalone? That is really the final question...

Actually I do have one more thing I don't understand. If I installed Win7 first and Win8 second, isn't it the Win8 bootloader that is actually the alpha loader here? I am so confused about this thing that you all probably find simple...

Soooooo sorry for all the questions and long read, but I figure I would get it all out there at once so you would know my thought process on this. Now you know how exasperated my professors got with me back in college, every time they told me one thing I had three more questions to try to clarify further until I was absolutely positive I understood every facet. D'oh!

Thanks everyone for your patience with me! 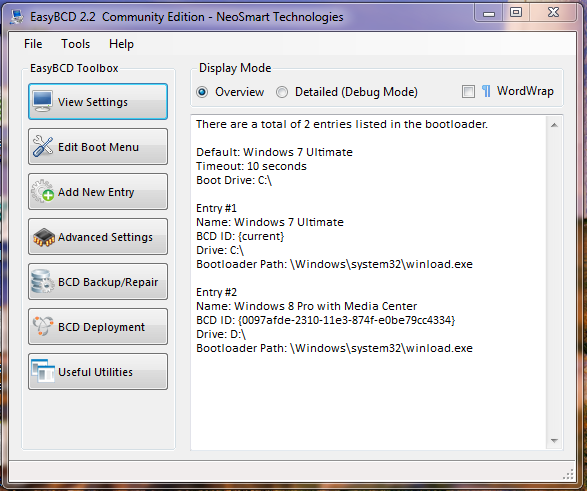 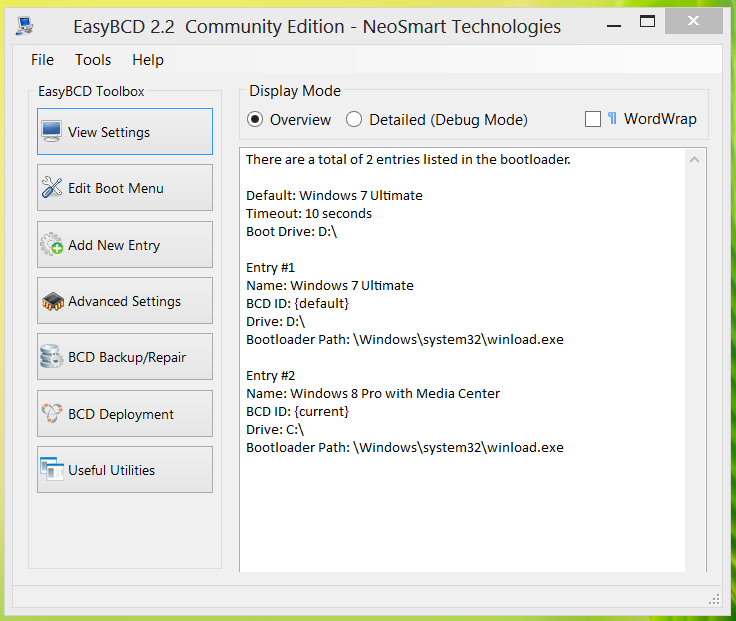 Kaos Kid wrote: I didn't want to do that since I am using a valid key, just one with limited re-installs/re-activations.

Dont really have time to read everything on this, but I did catch this quickly.

So you know, unless this is a very specific instance the 'limited reinstalls/reativations' thing pretty much just means after a period you have to call in and activate it over the phone. One of the wonderful questions they ask is 'how many machines is this copy on'... Since its on 1 it shouldnt be an issue. Takes longer than online activation but only by a few minutes. I have to do this periodically with some of our action pack stuff as it gets abused and requires a reinstall every other month or so.
Top

I'm not sure this has relevance but when the dual-boot menu comes up it is a text menu rather than a fancy GUI like I heard Windows 8 uses for a dual-boot menu so does that mean that my dual-boot configuration is using the Windows 7 bootloader that is found on the Windows 7 drive with a Windows 8 option that points to the Windows 8 drive? Since I can boot to Win7 drive without Win8 drive being connected I am assuming that I can safely edit the Win7 bootloader to omit the Win8 install with no ill effect, and furthermore if so can I safely create/repair a separate bootloader that will reside on the Windows 8 drive so it can be (for all practical purposes) a standalone install and be booted to through my bios rather than using the Windows 7 drives' bootloader? That is really the gist of what I hope to accomplish, I don't know how much more simply to put the queries. Thanks in advance to anyone that can specifically address the questions I am asking.


PS I just thought of something else *groan*
Would it be possible to copy the necessary files from another Win8 install I have that is on a standalone drive and boots on its own? If so, what files would I be looking for, where to find, and where to copy them to on the destination drive?
I have come to the conclusion that "FaceBook" should be renamed "FacePalm"

Yea, I have experience with the phone activation as well, it's pretty easy to do. I'd go ahead and do the install on the secondary drive and do the phone activation. Tell them you had to replace the system due to the motherboard failing if they ask why you're reinstalling. Never had an issue with doing it.
Top

OK thanks for your suggestions.

Thanks to all that replied specifically to my queries, and thanks for your patience.
I have come to the conclusion that "FaceBook" should be renamed "FacePalm"